This is the first time in a long time I've had a fitness type "event" to recap, so I'm really excited!  Sunday we did the wildflower hike at Latourell Falls in the Gorge, and this was also the first guided hike we signed up for through Friends of the Columbia Gorge, so I was definitely really eager to see what the experience would be like.  Spoiler alert, it was awesome!

Latourell Falls is located in the Columbia River Gorge one of the very first of many waterfalls you'll hit as you drive down I-84 and I am ashamed to say that I've lived here about 16 years and have never once been to it.  I guess if the wildfire did anything, it's forced people to check out areas of the Gorge that they may not have before, I know that's definitely been the case for me.  Latourell is on the Historic Highway that runs parallel to 84, which I hadn't driven since last summer before the fire.  It was good to drive it again, it's honestly a bit of an engineering marvel, but I was really sad at points at how many scorched trees are there.  It's just a hard thing to witness.  There were also quite a few rocks in the road, which was a bit nerve wracking since rock slides are a major concern now that many of the trees are gone.  (In fact, there was one near where we were on Monday!)  We ended up getting there pretty early because we were worried about the parking situation, which can get gnarly around some of the waterfalls.  It gave us a good opportunity to get in some warm up stretches, and also check out the overlook for the lower falls! 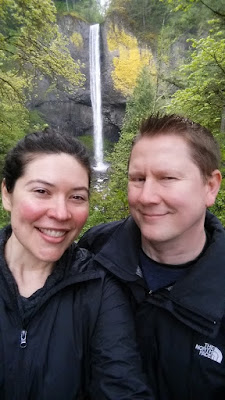 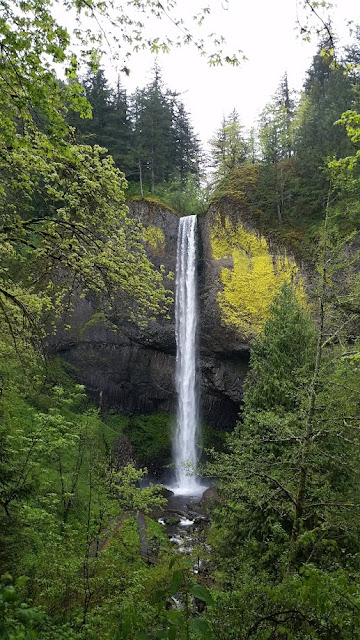 After that, both of the hike leaders arrived, as did the rest of the group we were with.  A state park ranger led our hike (since I didn't ask her permission to have her name/photo shared, she will be referred to as M), and she was so awesome!  I am kind of dorky like this because I get oddly anxious about silly things, but having a ranger be there suddenly calmed down any remaining nerves I had.  It just felt very official and like we were in great hands, and we were!  There was also a really great volunteer who I'll call S who was walking at the back of the pack.  They were really awesome about making sure everyone was being safe and that everyone was always accounted for.  I am terrible at guessing crowd numbers, but I think we had about 10 people on our hike besides us?  We ended up being the youngest people besides M and S, but that's fine with me because we're kind of old souls anyway.  Everyone was just kind of quiet and about business on the hike, which I appreciated.

The forecast had rain, but M joked that she was holding the rain back until the hike was over, and wouldn't you know, it didn't rain a single drop the whole hike!  I mean it's Oregon, I was fully prepared to get rained on, but having the hike be dry was such a blessing.  The sun even popped out at several different points, and it just honestly made the hike magical.

We started off towards the upper falls, and M had given us these cute wildflower "bingo" cards where we could win prizes if we identified flowers in a certain order.  The cards were mainly helpful for identification.  I'm pretty good at identifying typical garden type flowers, but I definitely am hopeless in the native plants department. 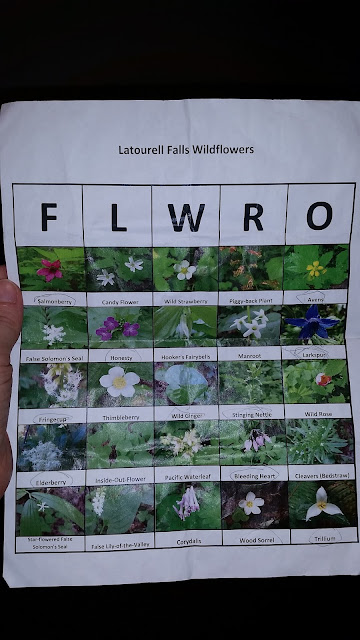 One of the first things M pointed out to us was wood sorrel, which is edible.  I've passed this plant a million times out in parks and never realized that you could eat it!  Eric didn't try any but I was brave and took a stab at it.  I actually really liked it, it was immensely sour and a lot like lemon, but I'm very much about sour foods.

We reached the upper falls, which were just absolutely gorgeous.  We were blown away by how close you could get to them.  They were running pretty strong, but we've had a lot of rain and snowfall this year.  The mist that was coming up felt very refreshing! 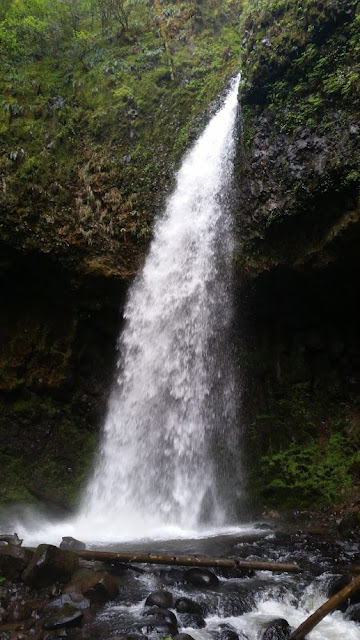 We continued on uphill and got several breathtaking views of the Gorge.  I have to admit, I've been in an Portland funk lately, just basically wondering if this city is still a good fit for me since there have been some immense changes to the city since I've moved that leave me kind of cold.  But we reached a view point that made me fall in love with Oregon again, hard.

I realized it's just the city I'm mad at, and I can leave it and come look at this beauty anytime I want.  Maybe we could even retire out this way someday.  Regardless, I'd be pretty silly to leave this.

And I of course need to point out the star of the show, the wildflowers!  Since the spring has been pretty dark and wet they weren't in full bloom yet, but there were definitely plenty of pretty, delicate little flowers to be found.  I only captured a few of them since I was trying to balance taking photos with putting my phone away and just experiencing the sights around me.

We also encountered quite a bit of stinging nettle, which I thankfully have never been stung by because I hear it's quite painful.  I have eaten it a few times before and it's very delicious.  I might have to bring some clippers next time and harvest some!

The entire hike was a little over two miles, and while I wouldn't classify it as difficult on any level, there were definitely a few points that made me thankful that I'd started back into strength training and have really been pushing my limits on what I'm lifting for my lower body exercises.  There were just a few uphills where I really had to pay attention to my footing and having lower body and core strength definitely helped.  (I was not sore the day after either, score!)

The hike ended earlier than we anticipated and we were still pretty pumped, so we did a little extra loop down to the lower falls, which again we were surprised at how close you could get to them. 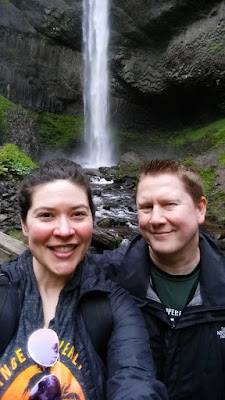 After that we went and had lunch at Thunder Island Brewing, which is a bit of a drive up 84 but totally worth it.  They have a patio right next to the Columbia River, and it's so relaxing to sit out there, have a beer and watch the river. 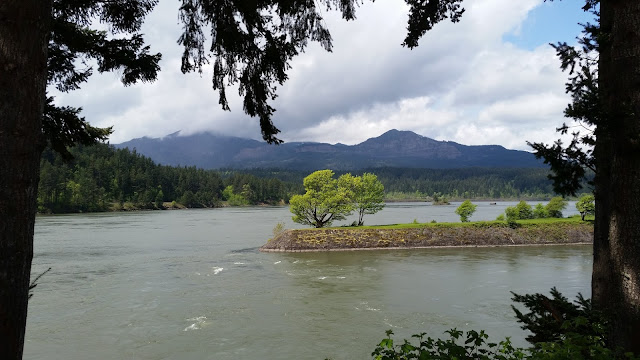 We had packed very light lunches and snacks for the hike in anticipation of maybe splitting an appetizer at Thunder Island, but we ended up just splitting a half of a PB sandwich and clementine on the hike, just kind of on the go.  That was enough to tide us over, and since the hike got over early we were able to have a proper lunch at Thunder Island so score!  They have really great food!

Then we ended the afternoon with an absolute must, a twist cone at the East Wind Drive In.  Best soft serve ice cream ever! 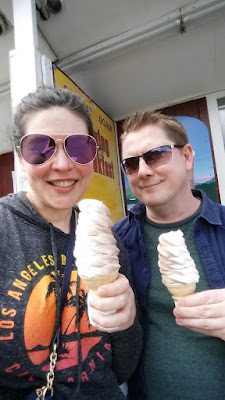 This was seriously the most fantastic, positive experience, and it made me so pumped and less nervous for the hike I'm doing with them in July.  I just felt really safe, immediately comfortable and welcome the whole time.  It's funny though, I felt the same way I did when I first started running and didn't know anything, like I didn't know what the hell you were supposed to wear or what kind of shoes to get.  I was definitely eyeing M, S and all of the people on our hike to see the types of gear they had.  Working out at home means I can wear whatever, so I don't have a ton of compression wear or workout gear anymore.  I also workout barefoot because I just feel steadier when I lift that way, so even my running shoes are ancient.  I'm definitely going to have to start getting some proper pieces of clothing and shoes.  My zero drop New Balances were fine for a smaller 2 mile trail but are definitely not going to hack Cape Horn.

If you live here, I cannot encourage you enough to check out Friends of the Columbia Gorge's site not only for their guided hikes, but simply for the wealth of information they have on ALL the hikes on both the Oregon and Washington side of the Gorge.  They are really kind, knowledgeable, and their love for the Gorge is so evident.  If you plan on visiting Oregon and are interested in hiking, it's a great resource as well!  They are doing fantastic work along with the Trailkeepers of Oregon, so definitely give them some love and support.