Lord almighty, so much time has already passed!  March was a really interesting month for me, most of it very positive.  I kind of broke things up by topic like I did in my last post, for some reason it's easier for me to keep things straight!

So this month was great on the level of me getting out and about more.  For January and most of February I was in full hiding mode, but I put myself out there in March and was a bit more social.

One of my other old coworkers texted me asking if we wanted to come to their house to watch the Oscars.  Truthfully my first instinct was to say no, because that's been my instinct towards everything for months, but then I reminded myself that I've got to stop hiding.  I've just got to get back out there and be around the people who care about me, and who I care about.  So I said yes, and we had the most marvelous time!  I hadn't seen him in almost a year, and hadn't seen his wife in like THREE years I think, so it was really great to catch up with them.  I felt a lot lighter and happier afterwards, so thanks A for inviting us over!  I also got a lot of clamor to resurrect my annual Oscar party, which I haven't held in a few years.  Maybe, we'll see.  ;)

Later in the month I put out an invite to a bunch of my old coworkers to meet up at a local pub, just basically whoever could make it.  We ended up having 8-10 people show up, some who I hadn't seen in years and we had SO much fun!!  It was so great catching up with everyone, having some laughs, sharing memories of the "old days" at work and that kind of thing.  (We had a rock star of a server too, she took great care of us despite the bar being insanely busy!)

And for the first time in awhile, I've got some stuff going on on the fitness front! I am sure you guys remember me talking about the devastating Eagle Creek fire and how it destroyed much of the Oregon side of the Columbia River Gorge last August.  I donated to the Friends of the Columbia River Gorge in order to help with recovery efforts, which automatically made me a member.  A few weeks ago I got a catalog from them with updates on the trails, plus a list of the upcoming guided hikes (most of these will be on the Washington side, which wasn't damaged) they had scheduled.  I was intrigued, so while Eric went up to call his mom to chat, I decided to pour a glass of champagne and browse the hikes they were offering.  Such a mistake.  Or maybe not.

Every hike honestly sounded like heaven, and the more I was reading (and drinking), the more pumped up I got about it.  I've overthought everything so much in the last year that I decided, screw it.  I'm going to sign Eric and I up for one of the easy hikes, so I choose a two miler at Latourelle Falls (Oregon side, but the fire didn't get quite that far) on April 29th.  It's pretty cool, because it's specifically to look at the wildflowers that will be blooming and of course the waterfall itself is gorgeous too.  But...I kept browsing.  And I saw a guided hike in July for the Cape Horn Loop, which is an 8 mile hike on the Washington side of the Gorge that's supposed to be pretty phenomenal.  It's on a Friday.  I'd have to take a PTO day.  I'd have to go by myself.  I kept agonizing.  And I kept looking at it.  And after glass #2 of champagne, I signed up for it.

This is so out of my comfort zone in every way, yet it's something I'm really excited about.  I've really wanted to do a longer hike for awhile, but didn't want to do it by myself, so having it be in a group will be nice since it feels a bit safer.  I knew something this long (and I think it's also a more strenuous hike) wouldn't be Eric's cup of tea, so I just decided to take this plunge and take a me day.  I am very nervous about meeting strangers and also driving by myself to Washington, but also so happy to have this experience.  Also...it means I need to get my shit together physically because it's a freaking 8 mile hike in July!  My running days are behind me, but I have to admit, it's nice to have an event to work towards and train for.  I miss the process, but not the running part.  Anyway, I've been pretty good with my workouts this month and have gotten back into lifting.  I definitely could and will do better, especially when it comes to diet, I just wanted to ramp back into a routine slowly.

I can't believe this, but our sweet girl Molly turned TEN at the end of March.  As always we had a little "party" for her.  I ordered a peanut butter cupcake mix especially for dogs off of Amazon, (for the record, the Puppy Cake Wheat Free mix.  And that's a non-affiliate link!)  We took our annual party hat selfie, which as you can tell by my death grip on her chin, she totally loves. 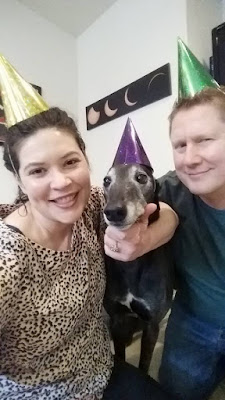 What she did actually really love was her cupcakes.  She lives for anything peanut butter, and they also came with a packet of yogurt icing that she also seemed to really like.  She went completely crazy, I swear that dog knows when something is for her.  I put a cupcake on a plate for her and she jumped up to knock it out of my hand!  She's not exactly Miss Manners in the kitchen or around food as it is, but she's usually never THAT brazen about trying to take things.  Needless to say, she loved them.  We only kept a few of the cupcakes and gave the rest to coworkers for their dogs. 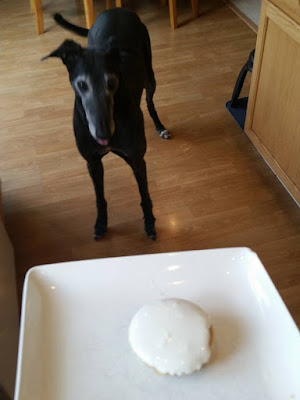 We ended March by going to see Hamilton, which was AMAZING.  Let me tell you though, getting tickets was an absolute ordeal.  We expected it obviously, but I'd never quite had a ticket buying experience like that.  I sat for over an hour on Ticketmaster and was about to give up, when by some miracle I was able to nab two tickets on a Saturday night no less.  We were so stoked!

We ended up having a beautiful, warmish day that Saturday, so I was able to wear a dress and blind everyone with my white legs!  I was pretty excited about it, we never really get to dress up since our work place is super casual.  And yes, sadly what I'm wearing counts for "dressing up" on the West coast.  I honestly would be down for going fancier, but we borderline looked like we were going to accept a Kennedy Center Honor by Portland standards. 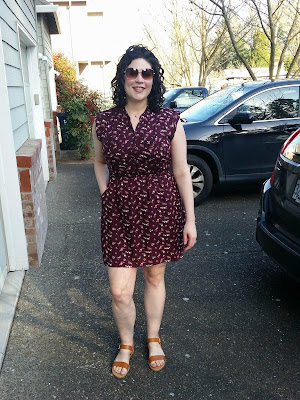 The outside of the Keller Auditorium where Hamilton was showing looked absolutely amazing.  We stopped to take pictures, and I had to be super dorky and do the trademark Hamilton fist in the air.  Other people were doing it too, so I felt less goofy about it, though honestly who cares anyway! 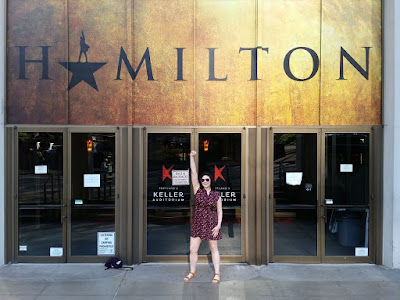 And here's a gratuitous picture of my very handsome husband.  I loved his outfit, he actually looked much sharper than me!  It's hard to tell from the pic, but he has on this really amazing grey suit jacket that I love on him. 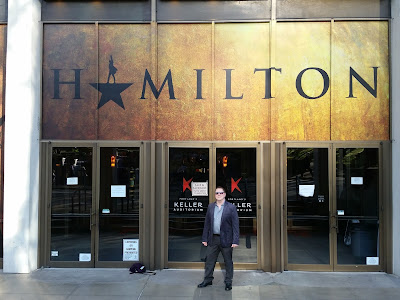 The show itself is everything it's hyped to be and more, we absolutely loved it.  I assume most people have seen clips at the very least, so you kind of know the gist, but it's definitely one of the most unique musicals I've ever seen.  I love history, and seeing it presented in such a fresh, modern way is pretty amazing!

Overall, March was a pretty good month on the emotional front.  I did have a bit of struggle through the middle and some low points, (our weather is still really getting to me) but it's definitely ended on a high note.  April has been kind of up and down so far, but I feel like that's my new normal anymore.

I actually did want to get this March update out to you guys, because we're actually about to leave for Cleveland for a few days to go to the Rock Hall induction ceremony!  I definitely need this trip, Eric and I are both a bit burned out with work and need a change of scenery.  I mostly wanted to be able to do a full report on it when I get back.  And I swear, my focus and updates will turn back to food and fitness!

I hope you all are doing well!
Posted by Runs To Get Waisted at 3:12 PM