Home stretch people!  Thanks for hanging in there.

On Sunday we met up with our friend Maria down in the Flats of Cleveland for brunch.  We've known Maria for about 5 years now, and met her through a Facebook group for greyhound owners back when we first adopted Molly.  She is really awesome, funny and has the same taste in music, so we've just bonded really well over the years.  We met her in person for the first time back in 2015 and it was a blast, so of course we wanted to make time to see her again.  Eric and I joked that every time we come to Cleveland, we jump in the car with someone we only internet know.  But seriously.

I didn't know much about The Flats, but it sounds like the typical, it was the hip happening place "back in the day", then fell into disrepair, and now is back on the upswing.  Eric researched some places and settled on this place called Collision Bend Brewing because of their nice looking brunch. 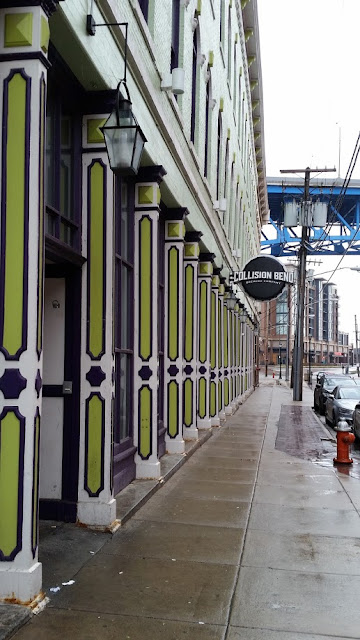 They seated us in this closed in patio right next to the Cuyahoga River and it was so relaxing!  Again, a brunch place like this in Portland with any kind of cool view would be impossible to get into on a Sunday, but we got right in there and it was also super mellow.  I was obsessed with those smoke stacks when we were there, they look just like the ones on the Pink Floyd Animals album!  The blue bridge (sorry locals, I didn't catch the name) was really cool too.

I normally opt for savory breakfasts, but their baked French toast sounded so amazing that decided on that, and it was definitely the right choice.  The custard part of it wasn't too sweet, and it also had Nutella and berries in it.  It was so delicious!  Their Bloody Mary's were also very tasty.

We had a great time catching up with Maria, who was then kind enough to drive us over to the West Side Market to check it out.  I really was dumb and not on my picture game Sunday, I regrettably barely have any photos from the market.  It was this amazing indoor market similar to Pike Place with stands ranging from spices to meat to cheese to baked goods.  I honestly could have walked around there for hours.  If I lived in Cleveland, I'd be there every week shopping!  Maria bought me a kolache cookie to try, but sadly it was a bit shoulder shrugging.  For whatever reason the baker had them super refrigerated, so I don't think they were as good as they could have been.  Eric bought these fruit filled Russian tea cakes that were pretty amazing though!

If you're a foodie and in Cleveland, definitely take the time to stop and walk through the West Side Market! 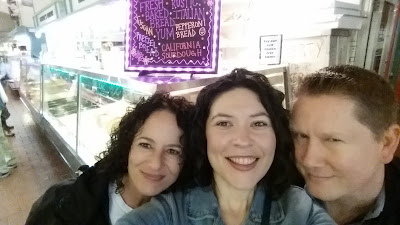 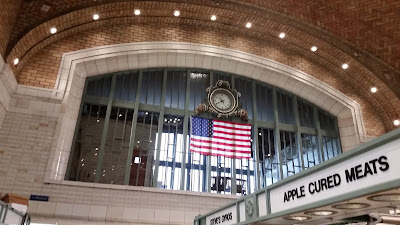 After that we went to a bar called Town hall to have one last cocktail. 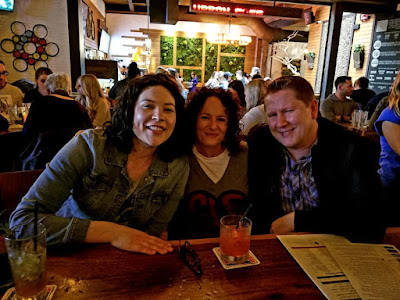 I have to admit, I was feeling a bit crispy by this point.  On top of the whirlwind trip and the ceremony, I had another case of insomnia on Saturday night, even after the ceremony.  Super frustrating but yeah, the trip started catching up with me.  The bar was super loud (one of the Cavs playoff games was going on) so I was definitely anxious to kind of power down back in the hotel room.  We finished up our drinks, got back to our hotel and just chilled awhile.

The weather was really rotten again that night, and instead of going out to eat, we decided to get Chinese and have it delivered to our hotel room.  I know that doesn't sound exciting, but it sadly was pretty novel for us, because we live in an area where the delivery options are pretty limited and also quite expensive.  Being able to get cheap Chinese food delivered to our hotel room was kind of mind blowing!  Also, for whatever reason we don't have the big NYC style egg rolls here in Oregon, just the little tiny spring rolls.  I'm not sure why that is, but he and I both really miss the big ones, and this place had them!

Anyway, that was our trip.  It definitely was a really wonderful break and helped changed my perspective and outlook on things.  I am eager to write about what's been going on since we got back!
Posted by Runs To Get Waisted at 7:22 AM