I am currently recuperating from our Cleveland trip, which was a marvelous, emotionally restorative and physically exhausting trip!  There is so much to cover that I'm going to have to break up everything by day, but the trip was so wonderful that I really did want to recap everything we did and saw.

Longtime readers may know, but both Eric and I are very passionate about music, and are especially obsessed with the Rock and Roll Hall of Fame.  We've always mildly kept tabs on the Rock Hall inductions, but the hobby became a full fledged obsession after we went to our first in person Rock Hall induction ceremony in 2012 in Cleveland.  After that we swore we'd try to come back to Cleveland whenever the ceremonies are held there (every 2 years), and we've held to that!  We went to Cleveland in 2015 and then went to this year's ceremony.

A lot of people like to bag on Cleveland, but honestly we really like the city and always have the best time when we go back there.  I don't really understand the snark about it!  There are a lot of cool neighborhoods, laid back bars, amazing museums and history there, so we like it and the Cleveland haters can suck it basically!

This trip is probably the most crazy concert stunt we've pulled to date because for the first time ever, we flew to Cleveland without ceremony tickets in our possession.  We actually got shut out of all of the membership presales AND the public on sale to the ceremony due to the absolutely insane Bon Jovi fans.  To put this into perspective, I got tickets to our 2012 ceremony (with Donovan, GnR, the Red Hot Chili Peppers and the Beastie Boys) in about 10 minutes flat, and the 2015 ceremony (where Paul McCartney and Ringo Starr sang together) in 15 or so minutes.  Somehow, because people are strange, Bon Jovi managed to cause an almost immediate sellout over a reunion of the two living Beatles.  I don't know whether to be in awe or cry.  ANYWAY, we'd already booked flights and a hotel for Cleveland since we had never had an issue getting tickets and didn't anticipate or dream we'd get shut out being that we've been members of the Rock Hall since 2012.  Once we did, we decided to take a gamble and fly to Cleveland without ceremony tickets and play chicken with Stub Hub sellers to see if they'd drop ticket prices before the ceremony.  It was a huge gamble given the number of Bon Jovi fans lusting for the tickets, and given the fact that the Stub Hub sellers had $100 tickets listed for $8,000.  Yes again, this was all due to Bon Jovi.  We had a lot of other stuff going on and friends we were meeting, some related to our Rock Hall projects, so we figured even if we didn't get into the ceremony we could just explore Cleveland and be grateful to be on vacation together at the very least.

I won't bore you with our flight details other than it was early as hell, everything was on time, and I made these bomb ass breakfast boxes to take with us on our flight.  I highly recommend taking a nice homemade meal on the plane with you, it was good to start the trip off on a healthy note.  I just included a ham and cheese sandwich on an English muffin, a banana, a clementine and grapes.  Those Fitpacker cases are pretty awesome (you can find them on Amazon), easy to stash in your carry on and kept our bananas from getting squashed!

We landed around 2 in the afternoon Cleveland time, and by the time we got to our hotel, freshened up and put away our things, we were definitely ready for a bit of dinner!  Eric did quite a bit of research on some of the up and coming breweries near the hotel, so we struck out to Masthead Brewing for a really early dinner.

So here's the thing I really appreciate about Cleveland.  You can walk into any cool, hip place and just sit your ass down with no waiting.  The traffic is also immensely easier to deal with.  With Portland, it's like planning D-Day sometimes to determine the right time to get to a restaurant before it gets insane.  Masthead was a REALLY cool place, I wish I'd taken pictures of the inside of it, because it was this giant space with tons of natural light and was very relaxing.  If that place were in Portland, it would be blown out with an hour waiting time and packed to the gills with hipsters and toddlers.  But with Masthead we walked right in, saddled up to the bar and got our food ordered.

We were so hungry that we each got one of their pizzas, though we probably should have just split one, plus we shared their goat cheese and pistachio stuffed dates, which were absolutely heavenly.  I got their mushroom pizza, and Eric got the pesto pizza.  Both were really delicious, and I was beyond impressed with their beer too.  If you find yourself in Cleveland, we definitely recommend Masthead, I was pretty impressed with the food.  We had a great time just relaxing and talking, and of course, eating.

Eric pointed out that we were really close to the Rock Hall museum and that the Moody Blues were doing an interview there that night that we could likely catch, plus the museum was going to be open until 9 pm.  Now I have to say, I'm not exactly in love with the Moody Blues, but I was high on pizza, beer and vacation excitement, so I agreed we should walk down and see if we could get into the museum.  We definitely needed to walk after that meal!  The weather was also gorgeous on both Thursday (the day we got there) and Friday.  We were practically dancing down the street, we'd forgotten what it felt like to walk around when it is sunny and warm!  It was probably about 70 degrees with a soft breeze blowing, it was heavenly!

So if you are a music lover, you 100% need to put the Rock Hall museum on your bucketlist, you cannot leave this Earth without experiencing it.  It's one of the most incredibly well curated museums I've ever been to, and you can tell that an immense amount of love and care is taken with every exhibit.  As just a spoiler alert, the museum is so big that it took us two trips to cover everything in it, that's how much there is to see.  It's truly one of our favorite places, we both just get instantly giddy and excited walking through the doors!  This year they had added this fantastic art piece outside that said "Long Live Rock" that we took roughly a million pictures with. 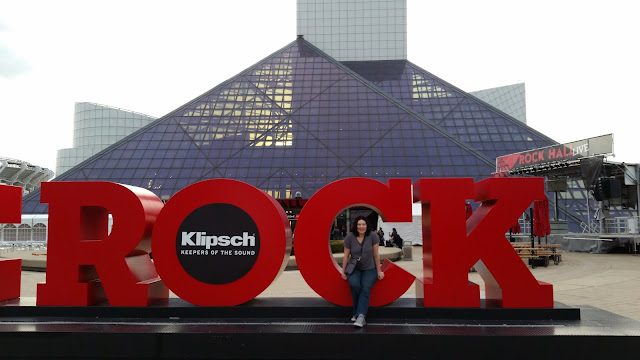 Since we're members we get in free, which worked out really well for us this trip.  We were able to get in, but the Moody Blues event was pretty blown out, so we decided to just cover half of the museum that night, then cover the remaining exhibits the next day.  Again, there are so many exhibits that if you ever go to the Rock Hall, you're really going to want to plan to either spend at least 4 hours there, or to split your visits into 2 trips, which is what we ended up doing.  We covered pretty much the lower two levels of the museum, which is no small feat.  They had done a lot of exhibit change ups since we were there last, so it was like a brand new place!  It's hard to pick a favorite part, but they had a really great section on Hendrix, plus a really nice exhibit on music by region (Detroit, Los Angeles, London, etc) and their impact to music.  Oh and it was crazy, they had this huge section of Michael Jackson memorabilia with THE glove!  That was definitely new.

One of the things that touched me the most oddly was that they had a case of Prince memorabilia next to a case with one of Tom Petty's jackets.  Besides the fact that they are two of my favorite musicians and they are terribly missed, to me it was especially poignant because there is this great induction ceremony moment between them when they inducted George Harrison.  I posted the video to it below, but basically Prince burns the building down into rubble with one of the most incredible guitar solos that EVER existed, and there is just this sweet moment where he and Petty are just grinning at one another and clearly having the best time playing.  I cannot watch it without getting emotional, which I know sounds silly, but it really is a very powerful and awe inspiring performance.  (Also, keep this video in your mind for my Day 2 recap, because it comes around again.)  Anyway, I am not sure if they planned having the two cases together, but it felt very special.


We were at the museum from about 6:15 to almost 9 pm when suddenly the long day of travel hit us, so we headed back to our hotel to get some rest before the very much anticipated busy Friday we had ahead of us.  I'll end here on that note!
Posted by Runs To Get Waisted at 12:35 PM