Okay, we're in the home stretch here.  Sorry for the delay!  I'm going to try to hurry up with the next 2 recaps so I can talk about present day again!

So I have to admit, Saturday didn't start off on the best note for me.  My insomnia decided to rear its head Friday night when I went to bed, and I didn't get to sleep until about 3:30/4 am on Saturday morning, then was up at 7 am.  That...sucked.  Like majorly.  I was freaking out because we had a busy day ahead of us, including the ceremony, which was likely going to clock in at anywhere from 4.5 to 6 hours.  We'd wanted to go to a different museum that morning, something like the Science museum that's there by the Rock Hall, but decided to just dial it back a notch.  We had a small bit of the breakfast downstairs, took our time getting ready, then decided to gear up to have lunch at around noon.  We spontaneously texted our friend N to see if he wanted to meet us for lunch since it was going to be the last opportunity to see him.  Thankfully he was done with his own Rock Hall museum walkaround and was able to meet up, so we just all went to Masthead Brewing again.

We had a nice time chatting about our favorite exhibits at the museum, speculating about what we thought would happen at the ceremony that night and just assorted Rock Hall nerd stuff that I won't bore you with.  After that Eric and I went back to the hotel and I pretty much went back to bed in order to get some semblance of rest before the ceremony.  In the midst of our nap, the weather decided to take a complete dump and started POURING!  It was crazy.

The Cleveland ceremonies are held at Public Hall, which is a really pretty venue if you've never been.  It's a bit small considering the event, but is a really nice place regardless. 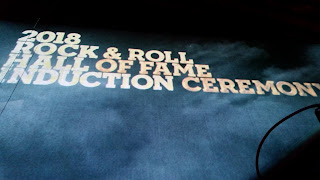 We ended up freaking out when we saw where our seats were, which were in a VIP section pretty damn close to the stage!  I guess some fancy VIP person thought they'd be happier making cash off the tickets than going to the ceremony.  Whatever the case, we were pretty pumped because we had a great view of the room, and hilariously, the teleprompter. 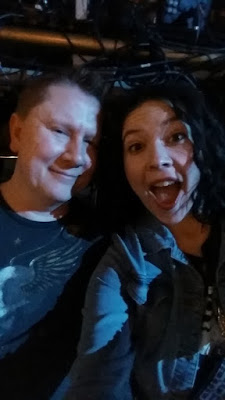 Just in case you weren't sure or wanted a refresher on this year's class, it was the following artists:


I will be honest, I wasn't completely jazzed about this year's class apart from Nina Simone and Sister Rosetta Tharpe.  I can't stand the Dire Straits, The Moody Blues don't do much for me, Bon Jovi is complicated for me.  I was neutral about The Cars.  My "decades" are primarily 50s/60s and then jump to 90's.  I enjoy music from the 80's, but it's not the decade I'm passionate about.  But, the ceremonies always have something to love, so I just rolled with it all.

So to back up to Bon Jovi...I have very complicated feelings surrounding them, probably far more complicated than any one person should allow an 80's hair metal bad to hold over them, but here we are.  I was HUGELY into them when I was young, then my interest waned for the most part after the Keep The Faith album.  I was kind of mildly surprised they were inducted frankly.  They are too big of a band to ignore, it's not that I don't think they should be inducted, but I do think they should have waited.  There are pretty fundamental rock "building blocks" bands who have not been inducted who are far more deserving to be in the front of the line frankly.  And straight up, Jon Bon Jovi has acted like a spoiled asshole throwing a tantrum for YEARS about them not being in.  While we were here they visited the museum, and Jon gave a speech that ended with, "It's about f**king time."  Um first of all, you are standing next to the Moody Blues, who I don't like but are important to music.  They have been together and touring for 50 years and are just now getting in so, let's maybe calm down.  Secondly, I've seen many a "tough" artist get up there and express a heart melting amount of humility and gratitude over being inducted, so what's up with the chip on your shoulder?  Entitlement is not a good look Jon, for real.

So the ceremony was over 4 hours long and it's going to air on HBO on May 5th, so I will just condense some personal highlights/observations for me so this post doesn't yammer on for 5 years.

The ceremony opened with The Killers playing Tom Petty's "American Girl" and it was AMAZING.  They did a great job with it and it was a very heartfelt moment!

Bon Jovi's induction was rough.  Howard Stern did the inducting, and I know it's his thing, but he was very crass and insulting and just gave this uncomfortable speech.  It was seriously the most entitled crap of how it was the most unjust thing ever that Bon Jovi hadn't been inducted until now and was just a whole casserole of nonsense.  I have a pretty low brow sense of humor, I love things like South Park and Family Guy, and I most definitely have a foul mouth.  It's not like I'm a prude.  But I also have a sense of time and place and audience and yeah, Howard didn't do much for me.  Then the band got up, did their speeches (Jon gave a 20 minute speech that was basically his entire Wikipedia page and life story, WTF) and played.  Their set unfortunately sounded pretty terrible.

So I was tepid about The Cars getting in but holy SHIT their set was amazing.  They sounded fantastic and were a ton of fun.  I knew Eric was super excited to see them play, so I was happy for him in general, but even I was pretty blown away about how great they were.  Brandon Flowers inducted them and gave a very sweet and heartfelt speech that I really enjoyed.

The Sister Rosetta Tharpe set was seriously one of the best moments of the night.  Now, a lot of people are not aware of Sister Rosetta, but she is incredibly important to rock and roll, and I highly encourage you to check her music out.  She was the first black woman to play electric guitar (in the 30's and 40's no less!) and influenced Elvis, Johnny Cash and Little Richard, among many others.  She was simply amazing.  Brittany Howard from Alabama Shakes inducted her and also played one of her songs, and it was so sassy and joyful.  Felicia Collins also took a song and was pretty incredible.

Biggest highlight of the night...the Nina Simone set.  Mary J. Blige, who I love dearly, inducted her.  Nina's brother got up and accepted the award on her behalf, and gave a really inspiring speech (and also threw some delightful shade at Bon Jovi). Andra Day and in a surprise move, Lauryn Hill performed on her behalf.  They announced Lauryn Hill at the last minute and I seriously about peed myself when they announced it, because I love her.

Andra Day though, my god.  You guys need to 100% watch this video I'm about to link, because she not only has one of the most amazing, otherworldly voices, but her performance was very sexy in the most classy, sultry way.   I was just totally entranced by her.  That wail she did at the end as she falls to her knees took everyone's breath away!  I hope they don't cut this on the HBO broadcast, because it was hands down one of the most powerful performances of the night.


And Lauryn Hill, total swoon.  First of all, she looked absolutely, positively gorgeous in this big insanely poofy dress.  It was definitely like a queen taking the stage. 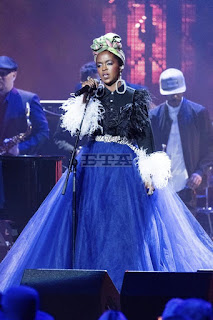 The first part of her set was a bit rough, it seemed like she was having issues with her monitors, but it quickly smoothed out.  Her performance of "Feeling Good" was exquisite.

Okay, that's it for the ceremony.  The next recap will be meeting up with a friend in the Flats, and then I promise I'm done!
Posted by Runs To Get Waisted at 11:12 AM