I guess I am quite overdue for an update!  Grab a cup of coffee, tea, or maybe even a glass of wine, cause it's been awhile.  I'll do my best to summarize.

Overall I'm...upright?  I don't really know how to describe where I'm at really other than that, my emotions are kind of like a pendulum week to week.  Some weeks the pendulum swings are "old" me, and sometimes unfortunately they are pretty far on the opposite end of the spectrum.  If you guys are Golden Girls fans, there's a scene in an episode where Blanche describes feeling "magenta", and God bless the internet and Google images for having a convenient meme at my disposal of the actual quote: 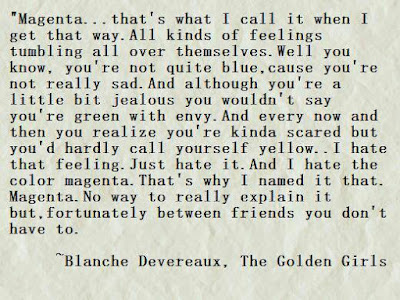 So yes, basically I'm magenta as a baseline, but sometimes swing hardcore one way or the other positively or negatively.

December was so bad that honestly, that was half the reason I have been putting off writing a post, because I didn't want to rehash it all again.  I have a draft of a post recapping the month, but basically it boils down to, December was shitty.  Super shitty.  Within the span of a week (the week of my birthday I might add), I got so sick that I didn't go into work for almost a month, we discovered that Molly had a bone disintegrating in her toe, requiring almost immediate amputation, and we had to prep the house for, then host some family for Christmas.  I am really glossing over quite a bit, but the entire month was basically big hits with constant fallout. 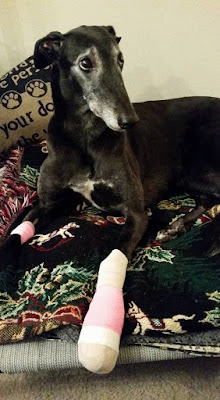 For the record, Molly is fine and has made a full recovery!  She was a complete trooper and a brave girl about her toe amputation, and even the vet was impressed with how well she recovered.  Her post surgery tests came back free of cancer, which was a huge relief.  But I would not recommend having your dog's toe amputated, then two days later having to host house guests for Christmas, all while recovering from an upper respiratory infection.  Molly was on enough pills that even Judy Garland would have given her a side eye, plus she couldn't play, go for walks or jump for two weeks.  She was SUPER pissy about not being allowed upstairs.  It was just a very trying time.

My birthday was comically bad.  I was in urgent care the day before, then the day of I was dazed because I'd coughed so much I was sleeping an average of 1-2 hours a night.  In fact most of December, my average night's sleep was no more than 3 hours a night.  All I had the energy for the day of my birthday was for Eric to take me to Powell's bookstore, where I wandered around for about an hour until I physically couldn't stand anymore.  And my period started a week early, of course, ON my birthday.  My birthday dinner was Thai takeout, though I will say, it was damn tasty.  We made the best of it, and Eric was incredibly sweet and a great nurse.  Bless him, he dealt with a lot of sobbing and nonsense from me all month.

For the first time in my life, I hated Christmas and wanted it over.  It was nothing but stress, sickness and misery.  We didn't get to do any of our normal little things that made the holiday special.  It was spent rehabbing the dog and rehabbing ourselves, because yes, Eric got sick right after me.  And our Christmas house guests got sick.  By the time actual Christmas was done, we couldn't take down our decorations fast enough, and as one last "screw you" from the universe, one of the Christmas lights on the tree broke and stabbed me in the palm as we were taking the tree down.  Yep.  Peace on Earth my ass.

We are just beginning to kind of see the humor of it all, but yeah, generally December 2017 is not spoken of much in our household!

I'll be honest, the last two months have been a bit of a blur, and I just had to physically look at my calendar to see what we'd done.  Which honestly, was a whole lot of nothing because I've been almost physically adverse to going out and doing anything.  January was all about just rehabbing and recovering from December, and discussing changes we need to make in our life to start scaling back and making things less stressful.  One of the conclusions we came to at the end of December is that we need to majorly recalibrate our lives.  We're constantly busy, constantly stressed and if we're not enjoying the million things we book for ourselves, then what's the point of doing them?

Like I said, currently I'm kind of just in a state of magenta.  I am still going to therapy, which is super helpful in many ways, but I still struggle day to day with feeling "normal."  It's hard to describe the feeling I have most days, but I feel flat, I guess?  It's like my general attitude day to day is a big shoulder shrug.  Generally I don't feel any type of high emotion, either excitement/enthusiasm or rage/sadness, and that emotional flatness is incredibly uncomfortable and weird.  It also makes everything feel 500 times more difficult than it should be, so I really struggle with motivation for anything in my life.  Bluntly put, when you aren't enthusiastic or excited for anything, there is no motivation.  Normally I feel so guilty and upset when I fail at goals I set, but again, I've been in a full shoulder shrug about everything.

And I have to publicly apologize to friends and family who have to deal with me or just haven't really heard from me lately.  Part of this quiet flatness lately has been this complete adverseness to being social.  I am slow to return texts/emails, if I remember to at all, and I've gotten in a bad habit of staying cooped in my house instead of going out with people.  I do think of the lovely people around me, quite often, but haven't made the effort I should in staying in touch.  It's the ultimate, it's not you, it's most definitely me.

I am fighting those feelings tooth and nail, because I don't want to feel like this.  I'm still young, and I don't want to coast through life numbly.  There are so many things I want to do.  I want to write on the blog again on a regular basis, I want to do with things with my music project, I want to get back to my workout mojo, and just in general have some areas of my life I want to be more driven on and accomplish more.  There is travel I want to do and things I want to see.  The work I do doesn't exactly set my soul afire, and of course that comes with all kinds of implications, all of which take an incredible amount of drive and energy that I'm not feeling right now.  But I'm doing my best to fight it.

Some have asked me about getting on medication, and I'm definitely considering it, which is a huge hurdle for me because it isn't something I've ever entertained before.  I am still very much on the fence about it, and am currently trying some smaller, less nuclear things to see if they will help.  I started taking Vitamin D, I purchased a light therapy lamp for my desk at work, and I've slowly been working on bringing fun and spontaneity back into my life.  We've tried out a lot of new restaurants and coffee shops lately, which has been surprisingly helpful.  It's hard to describe, but it helps to kind of break that feeling of being in a rut and provides a bit of excitement and brain engagement.  We're big foodies, so that first time of trying a new restaurant and experiencing a dish I haven't had before is a bit of a rush, and it's nice of course to have that shared experience with Eric.  It's not been so nice for my waistline, but some of the yummy meals we've been having are the ultimate sorry, not sorry ha ha.  On a healthier front, we also want to break out of our travel rut, and are exploring some new cities/landmarks we've never been to that we want to check out.

I do really want to get back to a place of regular workouts.  I haven't gained like some insane amount of weight thankfully, I've gained back about 12 pounds which is a miracle considering I basically gave up on life for two months straight.  Both December and January (and let's be honest, February) have been all eating and drinking my feelings.  My clothes still fit, but it's more about my body shape than the number showing on the scale.  I'm flabby again, and I hate that.  But at the end of the day it's not rocket science.  I've just got to cut back portions, count calories and start lifting/doing HIIT again.

Anyways, that's all my windbag way of saying, I'm fine basically.  I'm not feeling 100% amazing, but I'm here and slowly trying to crawl my way out of the doldrums.  And things certainly aren't all womp womp, I do have more positive things to share, I just kind of needed to get this 3 months of crap out of the way first!

I hope you all are well!