When You Can't Think of a Title

It was pretty clear from my posts over the summer, but I was struggling then.  I thought it was just normal struggling, but by late August it was pretty clear to me that it was something different and bigger.  By early October, the wave of depression that's been building for months and months suddenly knocked me on my ass and knocked the breath out of me.  The gravity of everything that's happened in two years hit all at once:  the situation with my dad, some work stuff, the flood my family went through, the destruction of my grandmother's house, the election, the Eagle Creek fire, a million little minor things, and a million major things that I'd rather not get into on the internet.  It just suddenly felt like the world was 100% darkness, that something bad was going to happen any second and that I was in a place I couldn't crawl out of.  I was constantly on edge and convinced something negative was waiting around the corner.  Even the most minor thing felt exhausting, and I lost all interest in anything I cared about.  I was insanely anxious while constantly tired at the same time.  This went on for months until one Sunday after a bad shift at the dog shelter, I came home and honestly just snapped.  Not like a dramatic psych hold snap thankfully, but just utterly dissolving while my husband held me and listened to me admit that most days I felt mildly disappointed when I woke up.  I don't like thinking about that day or recalling it really, but there it is.

So that's kind of where I've been.  I've been figuring a lot of shit out, and I needed a break.  I know I don't need to justify it to anyone, but I did want to eventually write a post to anyone who reads this blog just so you don't think I went off and died or abandoned the blog.

The good news is, it made me reach a point to where I realized that navigating these feelings without a professional just wasn't an option anymore.  I'm about to be 38 years old, and I don't want to white knuckle my way through life anymore.  I want to enjoy it and be present for it.  I want to be thankful for each day.  I want to be stronger and better.  So I've been seeing a very wonderful therapist since the end of September, and I can honestly say it's already made a huge difference in my life.  I was terrified to do it at first, and I'm not saying that spending an hour each week delving into my psyche is always pleasant, but it's been immensely helpful.  It's made me start meditating in the evenings, which I know many might think is a bunch of pansy liberal woo, but I can't sing the praises of it enough.  It's made me feel remarkably calmer, and I'm sleeping better than I have in months.  I don't feel the same level of dread or jumpiness.

I'm definitely picking my way back to a normal life and enjoying myself.  I've been cooking again, which I really missed, and making healthy meals.  I'm kind of doing a half calorie counting/half intuitive eating approach to my nutrition.  Basically I shoot for 1600 calories a day, and if I'm below that but don't feel hungry, I stop eating.  If I hit that and am still a little hungry, I have a snack.  I am finally back on the workout train for the last month or so.  Going back to eating whole foods and working out has of course helped matters.  I haven't weighed because honestly, who cares?  At some point I'll focus on and get to my weight goal, but my priorities are doing things that make me feel good right now.  And I am starting to feel good finally.  And I'm lucky.  I have good insurance, I have a husband who loves me and encourages me no matter what, and I have a lot of support from my friends and family.  A lot of people don't have that, and I couldn't have muddled through this without them.

There's still other stuff I've been avoiding and am not back to normal on.  I've been terrible about my music project and have pretty much abandoned it, which makes me feel like an awful person.  I don't know why I have such a mental block about it, and I'm trying to psyche myself to get back into working on those accounts.  There are times to be honest, I wish I could just drop it entirely, but I feel like that's the depression talking.  And there's this blog.  Admittedly there are times where I don't even know who I'm doing this blog for anymore.  Like is it for me?  Is it for the tiny handful of people who read this?  I don't even know at this point.  When the email came through like a month ago to renew my domain I was kind of like "hmmm".  Maybe it's time to let go.  But then again, I don't want to be hasty.  There's a lot of history and personal growth (and a lot of cringe too, my God I was so whiny) that I'd hate to lose.  So I'll keep it for now.  I may not write often, but there's no harm in keeping it.  And maybe at some point I will feel like blogging a lot more.

So there it all is.  Things are pretty good now and I'm feeling hopeful.  I am mildly anxious of putting my business out there, but at the same time, I hope if someone else is reading this and feeling what I was feeling, that it will encourage you to go talk to someone and that you're not alone.

Since I'd like to leave off on a happy note, and since I've been abysmal about putting photos in my last few posts, I wanted to show some post therapy photos/activities where I was feeling happy and doing small, positive things to put myself in a better head space. 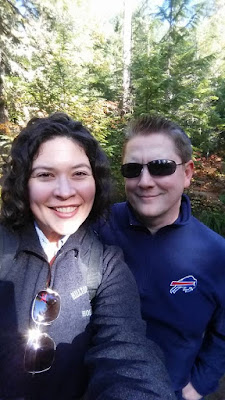 In October we went hiking on the Washington side of the Gorge since the Eagle Creek fire pretty much destroyed where we had planned to go.  We had a pretty awesome little adventure/hike to Falls Creek Falls, which was absolutely gorgeous.  Being outside and active definitely helps the happiness levels. 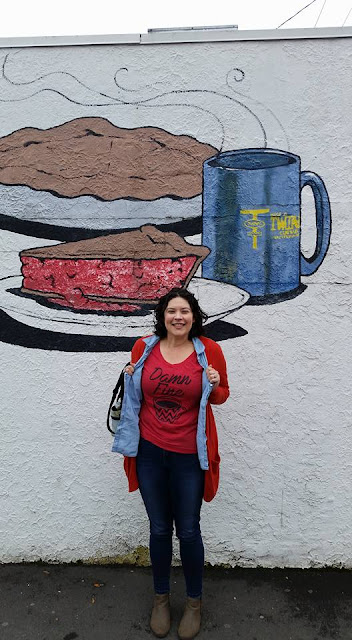 I'm about to out myself as a giant dork, but in November we drove to North Bend so that we could see all of the sites where Twin Peaks was filmed.  I was a huge fan of the original run back in the 90's, and really loved the Season 3 that Showtime just did.  Anyways, it was a pretty amazing and fun trip and I'd like to backtrack and some point and write a post on it.  We both had a blast.  That's me at Twede's Cafe, AKA the Double R Diner.  It was also like 30 degrees, so that's why I'm grin wincing, lol. 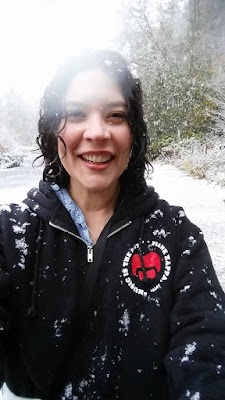 On the same trip we drove to see Snoqualmie Falls, which is something everyone needs to see because it's absolutely incredible.  While we were there, there was a surprise snowfall.  We were utterly unprepared for it, hiked the 2 miles round trip to the falls and back in it anyway and laughed our asses off the entire time at the absurdity of it all.  I also love snow, so I was pretty excited!

Anyway friends, thanks for listening.  I'll definitely be touching base more, even if it's for me.  I hope everyone had a wonderful Thanksgiving.
Posted by Runs To Get Waisted at 12:42 PM