Much like Joe Walsh, life has been pretty good to me lately.  Things have settled into a comfortable groove and routine, and I'm enjoying the calm.  Life is less busy on the concert and travel front (though picking up a bit this year) due to finances, but that's okay honestly.  Here's just a snippet of what's going on in our world (forgive the stream of consciousness!):

This July will be my two year anniversary of working at my new job, which is so hard to believe!  Like any job it has its pluses and minuses, but overall I'm really happy here and can't complain!  From a health/stress standpoint, there is no comparison to where I was, so I'm really grateful for that.  Having an actual work/life balance while also being appreciated as is is pretty amazing!  I recently pushed to be involved with a project here dealing with social media, and found out a couple weeks ago that I will not only be involved with the project but will be eventually taking it over!  I don't have "career" designs in the sense of "I want to be X when I grow up", but I've been interested in my career shifting towards social media for a bit, so this development is pretty cool for me.

July will also be my two year anniversary of volunteering at the dog shelter, which definitely blows my mind!  It's been a really unexpected joy in my life and made me feel like I'm actually doing good in the world.  When I initially volunteered I worried that it would be a sad or negative experience, but it's been the opposite.  I have seen some upsetting things like bait dogs, abuse cases, etc, and have also dealt with some difficult dogs, but being able to help show them kindness/affection and teach them good behaviors has actually been overwhelmingly positive as opposed to negative.  Ultimately we're helping them have a better life and find loving homes, so I feel really good about what we do at the end of the day!  Our shelter moves dogs in and out pretty quickly (they are no kill thank goodness), so I have a constant parade of different dogs in my life.  I always come home with an entertaining story and of course selfies!

My own crazy dog Molly is still doing great.  She is getting to be an old girl (9 this month!), I can't believe how much grey she has in her face now.  Next month will be 4 years since we adopted her, yet another "how the time flies" milestone.  Personality wise she is still the same demanding diva, like when she pouts and sulks over things like us not feeding her 2 hours ahead of schedule.  Like legitimately turns her back on us (while cutting her eyes back to make sure you're noticing the tantrum) sulking: 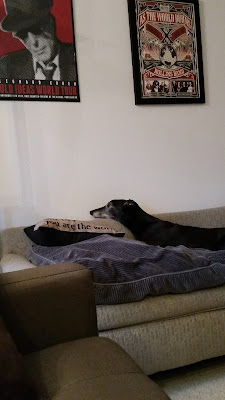 But she's pretty and knows when to turn on the charm, so she gets away with it. 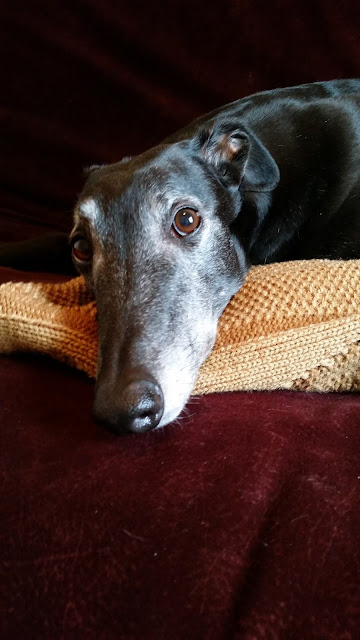 Eric is still doing great, he's still the same hardest working man in matrimony as always!  I've been so proud of him, he has his own side project related to the Rock Hall, basically a music and Rock Hall analysis blog, and it's really taken off.  He's even been mentioned by the music writer in the Cleveland Plain Dealer!  He's really kind of chipped away and shouldered his way into that world, and I'm so proud!  He's a better writer than I'll ever be, so I love reading his stuff.  I've never seen anyone so passionate and knowledgeable about music, so it's wonderful watching him do something he loves. 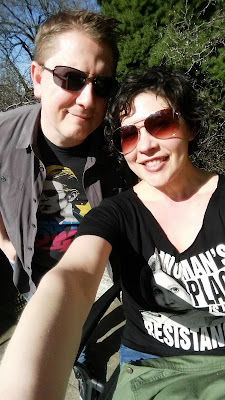 We are celebrating 10 years of marriage in May, and I know I keep saying "oh I can't believe [insert event]" but it really is crazy that 10 years have passed and even crazier that someone has put up with my shenanigans for that long!  I told you guys he was the hardest working man in matrimony!  Seriously though, he's pretty awesome and I'm very lucky.

So travel...I've got a lot of good trips coming up this year.  We've kind of had to take a hiatus from traveling like we used to just to save money, (that's the one drawback of our new job is not being able to live like Scrooge McDuck) but it's honestly made all the stuff coming up this year all that more exciting!

May is a big month, especially because I am for the very first time meeting a group of women that I am thankful and proud to call friends.  I've talked about my Lovely Ladies group (and our love for Alan Rickman) here and there on the blog, but basically we're all fitness bloggers who kind of stumbled upon one another.  That led to a weight loss support group being created, but turned into SO much more than that.  Anyway, we have become very close and like family over the last couple of years, so we finally decided to meet in person.  A few of them are doing races at the Flying Pig Marathon in Cincinnati (including Meg who is doing the full!!) so we're all going to spend the weekend together.  I'm just part of the cheer squad, but I am so excited to finally meet the women who make my life pretty awesome on a daily basis.
At the end of May, Eric and I are headed to Chincoteague, VA for our anniversary.  When I was a little girl my grandmother gave me a series of books called "Misty of Chincoteague" about a group of wild horses on this island off the coast of Virginia.  The wonderful thing is, it's a real place and there really are wild ponies there!  I've wanted to go all of my life, so I am beyond stoked.  It just seems like a wonderful little beach town, so I can't wait for us to kayak, hike, take nature cruises and just relax!
In July we're taking a trip to Bend, Oregon, which will be pretty cool since I've never been.  It wasn't something we'd planned on really, and I'm a bit ashamed to say that the only reason we decided to take the trip was because of Molly.  July 4th is miserable hell for us every year because of fireworks and the fact that our street becomes a warzone.  To say that Molly doesn't handle it well is an understatement, and every year becomes a horrible evening of trying to console an inconsolable, panicked dog and results in a sleepless night for us.  (Usually nights plural since the rednecks around us feel the need to blow off fireworks for several days in a row.)  It upsets both of us so badly to see Molly like that and absolutely nothing works to calm her, not even sedatives.  After a miserable January between New Years Eve and election night, we decided that we had to go somewhere for July 4th in order for all of us to somewhat keep our sanity.  After some research we discovered the Bend area has very few fireworks (it's pretty much wilderness), so we decided to rent a house there for almost a week.  Despite the somewhat negative reason we originally booked the vacation, we're pretty stoked.  It's in a beautiful area with lots of nature and that type of thing around, so it will be nice to go somewhere remote to relax.  I also hope that it ends up being a helpful solution for Molly!
Concerts

We'll pretty much never NOT have a pile of concerts to go to, though we did calm down considerably last year!  This year is ramping up again, we're seeing Roger Waters, Nick Cave, Preservation Hall Jazz Band, Neil Diamond, The Red Hot Chili Peppers, and Depeche Mode.  Of course that's who we're seeing for now, someone else always manages to creep into the schedule!

Those are about all of the updates I've got.  Hope you all have a wonderful weekend!

Posted by Runs To Get Waisted at 1:30 PM