Hey guys!  I decided to be nice to myself and not do Thinner Thursday last week.  I know that's a cop out, but I stepped on the scale post vacation, had a stroke, then decided this week was probably going to be more accurate as to what's going on.  I think my body is probably still reeling from traveling, sodium and not being in a routine, so I'm just going to give it a week to settle!  For honesty's sake, my weight was 191 when I weighed, but I am pretty positive that it's mostly water weight/bloating, especially since we had Chinese delivered for a quick dinner the night we got back and I ate the leftovers for lunch the next day.  In place of that and Favorites Friday, I wanted to recap our Los Angeles trip, which was absolutely wonderful!  It was busy, action packed and I had an amazing time with Eric and my aunt/uncle!  We had a lot of laughs, and it was fun getting to experience some of our favorite LA stuff through their eyes.  I've had the blog so long that I can't remember what I've told you guys and what I haven't, but basically Eric lived in Los Angeles for 11 years before we met.  He was an entertainment journalist for many years before leaving that industry for the corporate world.  We met through work (I was at the Portland office), and I went down for a training and we met in person for the first time.  Lightening bolts, destiny, fireworks, all of that, and then he moved up to be with me.  We go back to LA a lot since his brother lives there, and I've really grown fond of it and have come to appreciate its history.  We always have a blast!  Anyway, Eric is the best tour guide for LA you could have, and my aunt and uncle wanted him to take us around and show the sights.

For the most part I did okay from a health standpoint.  I would rate myself a solid B- I guess?  I was probably the most "behaved" the first two days when it came to food, but we really went for gusto on Day 3 with both food and alcohol.  I don't really regret when I overindulged, it was all stuff that I can get only in Los Angeles, I was having a good time and it was worth the water weight/extra pound or two to be honest.  I did stay faithful to tracking in MFP, so my streak is still going strong!

I admittedly didn't end up doing my Fitness Blender workouts.  We had a rough night our first night there and ended up sleeping probably about 2 hours max?  We rented this VRBO in Hollywood, and during the first night there was someone either a street over or possibly in the same building who decided to start practicing/singing death metal songs.  (You know the type I'm talking about, the one where it's screaming and not singing.)  Anyways, it was like a full on like we were standing in a club, shaking the room volume that went on from like 2 am to 6 am.  We were all pretty despondent about it, especially since we'd been up since 3 am Saturday and all of that jazz.  Since it's LA, there's no point really in calling the cops unless someone is being murdered in front of you pretty much.  We did talk to our rental guy in the morning and he felt horrible, and he found out that apparently these psychos did get the cops called on them and there was a complaint filed.  It was literally THE only negative thing that happened the whole trip.  Anyway, my larger point was that I sure as hell wasn't doing a workout after that night, and then the rest of the time I decided to prioritize spending time with family instead of fretting whether I was burning an extra 100 calories a day.

We did get in plenty of activity.  I don't wear a calorie tracker like a Fitbit or anything, but we were definitely crossing some miles every day.  Not enough to burn off what we ate certainly, but we definitely didn't laze about.  We all even took stairs instead of escalators where possible, took walks after meals, etc.  We walked so much that my foot freaked out and my plantar fascitiis flared up briefly, but thankfully went away!

I thought I would go day by day with recaps of what we did and show you guys some of my pictures!  I know I've been terrible about posting pics on the blog lately, and today will definitely make up for it!

The one thing I love about going down to LA is that travel wise for us it's so EASY.  The flights are cheap, plentiful and only take about 2 hours.  We got down there in record time, and even though getting up at 3 am majorly sucked, it was so awesome to land in LA at 9:30 with a full day ahead of us!  After checking into our rental and dropping our bags, we went back out for lunch at Canter's Deli.  If you're not familiar, it's an old school deli in Hollywood that's been around since 1931!  Eric first took me there because it was a place that the members of Guns N' Roses used to eat, in fact this famous picture was taken at a booth in Canter's: 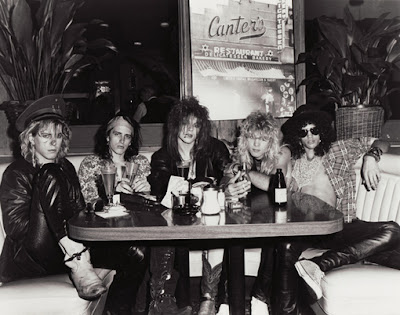 I absolutely love this place and beg to go every time we go down to LA.  I don't know what it is, it's just that it's not fussy, it's very authentic and it's a place that regular people go.  They have the bakery counter to end all bakery counters, but I always get a black and white cookie.  I will rarely leave LA without getting my black and white fix at Canter's.  We all got a cookie each, and it was seriously like the best batch they've ever made!  (I just stuck with matzo ball soup and an egg cream for lunch). 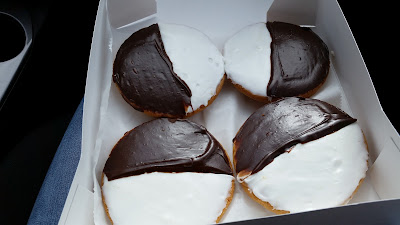 Afterwards we drove over to the Grove and the Farmer's Market to show my aunt and uncle around.  We were stuffed to the gills so we didn't really buy anything other than pastries for breakfast in the morning.  I opted for a couple of small rugelach, nothing too crazy.  The best part was that there was a booth selling soaps that benefited injured rescue animals, and they had an adorable rescue goat you could pet!  As you know I instantly become 5 years old whenever I see an animal, so I asked the lady running the booth if I could pet him, and she told me yes then handed me a french fry to feed it.  So cute!

After roaming around at the market we came back to our rental and caught a quick nap so we'd be a bit refreshed for the evening.  Since we had time and Hollywood Blvd was literally around the corner from our rental, we took a walk up there to take in all of the insanity.  Even though I am not the biggest fan of mascots, I was brave (ie had a glass of wine in me) and took a picture with "Finn" from Star Wars! 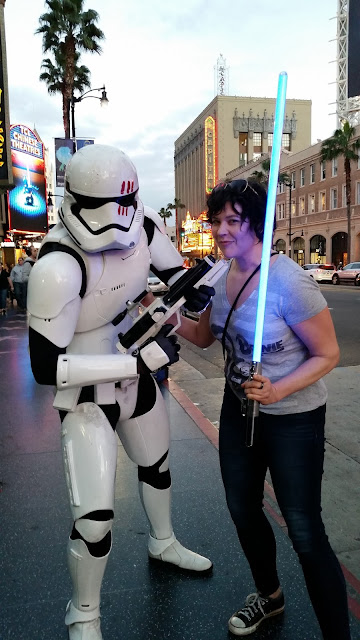 And then I took pictures with my man.  <3 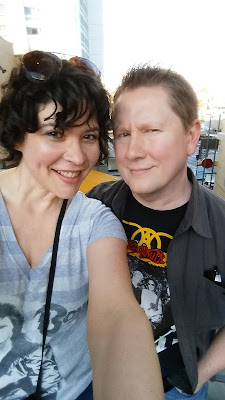 Afterwards we met up with my BIL/SIL at the Rainbow Bar and Grill on Sunset, yet another one of my most beloved spots in LA.  They have pretty amazing pizza, it's another laid back place where you can just chill, there's a lot of great history and there's a good chance you'll see a celebrity in there!  It's dark in there and basically lit up with just Christmas lights, so it feels a bit like a mobster speakeasy.  My aunt and uncle fell in love with it too, which made me very happy!  We had a really nice time catching up with Jeff and Nicole, noshing on yummy pizza (I only had 2 slices but wanted like 9!) and throwing back some beer.  Afterwards we walked up and down Sunset to show them all of the historical bars (ie Whiskey a Go Go, The Viper Room, The Roxy, etc).

Holy crap you guys...this is so long lol.  I have 2 more days to recap (with pics), so I think I'm going to cut the post here and do a two parter since I don't want to torture you too much and have the posts be 79 pages long!  Stay tuned later this week for part 2 of our adventures!