Hola!  Today's weigh in was one big yay!! 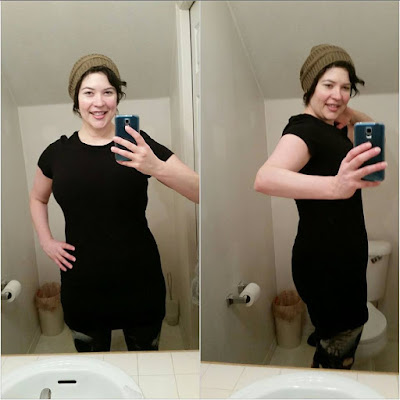 I think this week's success comes down to 1) better weather and 2) a better back.  The snow and ice storm derailed my activity levels a bit because I'm used to taking walk breaks and walking 1-2 miles a day when we're at work.  Kind of hard to do that when the sidewalks are covered in 3 inches of ice (we had 4 people fall at our office, one poor guy broke his arm in his fall!), so I was unfortunately sitting a lot more.  And then with my back I was doing lower impact workouts and not lifting as heavy when I did lift.  This week everything's back to normal, we've been doing 2 miles of walking a day, and my workouts are back to being intense.  Being active makes SUCH a difference.

My stupid back is FINALLY back to normal, and ironically it was after a workout on Saturday where I was very frustrated and decided to go after it like I normally do instead of holding back.  I was just really annoyed because I've been babying my back and it continued to be painful and feel pinched, so I decided that if it was going to hurt anyway I might as well get a good workout in.  So I did, I just lifted and did my HIIT stuff like normal, and my back actually felt better afterwards!  I'm pretty much at 100% now.  I do notice that certain things still don't feel good, basically anything where I'm bent with a flat back like a bent over row or a tricep kickback.  I may start substituting something else for those exercises, but otherwise things are good.

I've been pretty proud with my eating lately and things are still really on point for me.  We haven't had any "OMG, didn't pull anything out for dinner so I guess we should go have tacos and 20 margaritas" nights since I started back into this in earnest.  Having the steady stream of homemade dinners produces easy leftovers for lunch, which makes things easier to track, and I always have homemade breakfasts.  We're only eating out one to two times a week, so now it feels like an actual treat when we go somewhere!

No huge plans for the weekend other than trying to catch up on Oscar movies.  We've seen 3 of the best picture nominees so far, so we want to try to squeeze in a few more.  So far of the three we've seen, Manchester By The Sea is my favorite.  If you plan to see it....it's very, very dark and not exactly the most uplifting material, but it's so well done that it just stuck with me even days after seeing it.  The other two were Arrival and La La Land.  Arrival was much better than I expected, especially since I'm not a huge Amy Adams person, but her performance was very good and I was glad to see the movie nominated.  La La Land was good, though I am a bit surprised at how much everyone is foaming at the mouth in love with it.  I mean I liked it, it was well done, but a few things about it irked me that would spoil the movie if I went into detail over what they are.  In a nutshell, I was not pleased by the ending and we'll leave it at that!

Tomorrow I'm going to post my very first "Favorites Friday" post recapping things from the week that I really liked.  Meals, workouts or anything else that comes to mind!  I want to try to make it a regular thing, just to reinforce that there are so many positives to focus on!
Posted by Runs To Get Waisted at 10:58 AM