God almighty y'all, I am so sorry.  I've been a horrible blogger, I don't really know why I can't get back into the swing of it, especially since I could easily give little updates here and there, but it honestly slips my mind.  I used to take breaks due to shame of not being on point with working out/weight loss, but thankfully that's not the case here, I'm just literally spacing on blogging and getting caught up in other stuff.  I'll try to be better, but no promises!

Things are actually pretty good on the fitness front.  I finish my Fitness Blender mass program next Thursday, and after LA I'll begin their abs program.  I've got mixed feelings about the mass program, I definitely am a lot stronger and am very happy about that, but my body has changed very little, so that's been a disappointment.  While I'm not so obsessed with the scale at this point, it is still disappointing to see my weight maintain or even bounce up a few pounds.  While of course muscle is denser than fat and all of that noise, the fact remains that number wise I'm sill in the overweight category and I'm awfully tired of steadily hovering in the mid 180s.  Some of that is on me, my diet is not always as on point as it could be, but I do think focusing on lifting heavier has thrown things out of wack too.  Who even knows, maybe it's just strictly diet and all my fault.  I'm hoping that the abs program will help out my belly area, which is the main source of my stress and aggravation.  I'm just so tired of having a roll all the time and my pants not fitting right.  I know I'll figure it out, it's just frustrating to have cut arms, somewhat cut legs and then a flabby belly.  It drives me crazy!

I am still trying to navigate what my food life and eating habits ultimately look like long term.  Higher FODMAP foods have inevitably crept back into my diet and my digestive system is out of wack again and my stomach is puffier  than I would like.  I definitely don't look as slim as I did a month ago.  The worst of it happens when I ingest gluten, so whenever I throw caution to the wind and have something like pizza, bread or regular beer I immediately regret it.  I seriously feel like I'm going to die for about an hour afterwards.  A little bit seems to be fine, so if I have something like croutons in a salad or a small piece of cake it's ok, but a big portion is just not good times for me at all.  It's just so hard, there's this urge to just be a normal person and to not be fussy when we go out to eat, so it's difficult to reconcile the fact that I simply can't really have many things that I used to really enjoy without hardcore paying for it.

Things have been a bit hectic with preparing for LA, but once we get back I want to sit down and really come up with a good meal plan for myself and also create a good stock of freezer meals.  It's just going to be helpful from a dietary and a budget standpoint, it's just kind of getting the will and the organizational prowess to do it!

As far as life stuff, things are pretty mellow and mundane, although our trip is coming up next week and I am VERY excited!  It's been awhile since I've been down there so it'll be good to see all the usual haunts and friends, plus we're checking out some new places.  Specifically Eric is indulging me in a Beach Boys pilgrimage, so I'm quite excited about since I'm obsessed with the Beach Boys to put it mildly.

Other than that it's been the same old same old.  We hosted our friend Kevin over the 4th of July weekend because he ran three marathons, yes THREE, in as many days.  And if your eyes are bugged out at that, he casually informed us that no, that was not the most marathons he'd run consecutively....he once did 8 in a row.  Hey, he enjoys it and it makes him happy, so I say go for it.  He's almost at his goal for 300 marathons for all time, which is incredibly admirable. 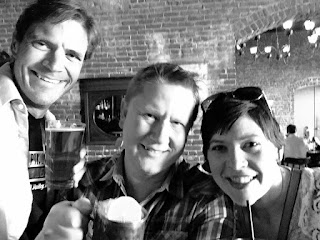 Anyway, he was a great house guest and we had a lot of fun.  Probably the funnest thing we did over the weekend was go see Jaws at a brewpub in Portland.  For a whole $2 we got to see the Roy Scheider hotness and also indulge in some pizza (which I immediately regretted) and cider (which I also regretted).  It's always so fun to see a movie like that on the big screen, everyone is so into it and the audience always claps at the end.

What wasn't fun were the fireworks, and yes, I am one of those curmudgeonly people who despises fireworks.  God I hate them.  Assholes in Oregon go across the border to get illegal ones in Washington and it's an absolute nightmare.  From 8 pm until 2 am (several days in a row I might add), our neighborhood turns into a war zone of M80s and other loud, douchey fireworks that people shouldn't have.  Molly goes absolutely out of her mind, the cops don't do squat about it despite the fact they're illegal, we don't get any sleep and it just sucks honestly.  I had to make an emergency call to the vet to get Molly drugs which ended up not helping really, so it was not a fun weekend on that front for me.  I was ready to go back to work by the time it was all said and done!

Other than that it's kind of been work and basic home stuff on the day to day front, then the shelter on Sundays.  My side project is still going steady and well.  Things are just good you know?

Here's a random smattering of pictures from recent stuff!