We had a pretty big, awesome weekend after a long hiatus of mostly being hermits.  Eric and I both were so exhausted last year with our heavy traveling and social calendar that we both kind of have run screaming in the other direction, but decided to get out and about this weekend.

So Friday was big since we went to see Paul McCartney.  I have now seen Paul three times in my life (twice in concert and once when he inducted/sang with Ringo at the Rock Hall ceremony in 2015), and it never gets old.  Y'all know how I am about my music, so needless to say seeing Paul is hugely thrilling for me.  It's heavy, seeing someone who influenced music as we know it, and I fully admit to openly crying through the end of the show.  How do you not cry when you hear "Hey Jude" sung by Paul McCartney and thousands of people all at once? 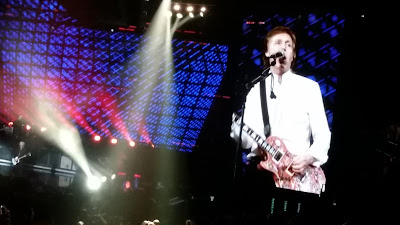 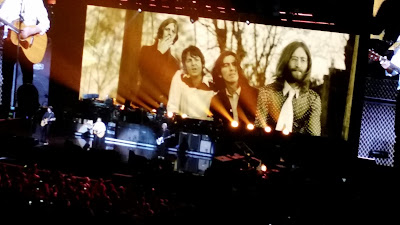 There was one blip in the evening, a small blip really.  We went to a Thai place we'd never been to before for dinner since I determined that Pad Thai in a reasonable amount is safe for me to eat.  Except when they brought my Pad Thai out, it had a very generous handful of tiny red onion pieces in it.  I was so completely bummed out and irritated.  I have never in my life seen any restaurant put red onion in Pad Thai, much less have it chopped in microscopic bits, but of course I would manage to find the one restaurant in the world that does when I am on this godforsaken diet.  I did my best to pick out the onion and be careful, but of course ingested several pieces of it.  The result was almost immediate, and 20 minutes later I was having the most painful stomach cramps, heartburn and was burping like crazy.  The next day I had a very specific pain right under my breast bone, the same pain that caused me to reach out to my doctor in the first place.  It is very clear that onion is a trigger for me, to the point that I'm not even going to bother testing it when I go to the fructan challenge phase.  I'm going to test garlic, gluten and things like beets, but onion can pretty much go to hell.

Saturday was Record Store Day, so we decided to shake the mold off and drive into Portland to walk around, go to a record shop and do our duty to keep the record stores alive.  It was hard to choose, but I ended up getting a Gene Vincent and a Sex Pistols album.  The Sex Pistols album was a impulse purchase on my way to the counter.  Apparently I do like bright, shiny things. 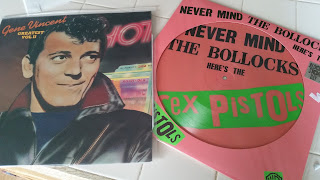 My food challenges officially begin Monday and I was supposed to text the fructose group (I was going to do cherries and asparagus as my challenge foods), but this cool new market thing opened up.  When Eric told me that our very favorite ice cream shop had a stand in there with soft serve ice cream, well...I called an audible and decided to switch my Week 1 challenge to lactose instead.

I got a small cup of vanilla custard with their homemade Magic Shell chocolate sauce, and it was the appropriate half cup serving size for ice cream since I didn't want to go crazy.  VERY tasty, although the chocolate was almost too bitter for me.  I would have been just as happy with the plain ice cream.  I know it sounds crazy, but having soft serve up here is a big deal.  Soft serve ice cream joints don't exist up here, and the only time I ever get to have it is if we go back East to see Eric's family or when we go to the Oregon State Fair.  (Holla to the Oregon Dairy Women stand!)  Some Oregonians go crazy and wait hours in line for disgusting Chick-fil-a, (no seriously, people camped in the parking lot for 2 days before it opened...with their toddlers) I get giddy for soft serve, what can I say.

The challenge went pretty well, I didn't notice any ill effects from it as far as stomach pains.  I'm going to go shopping today and get plain yogurt and maybe cottage cheese for my other challenge days.  That's what I miss eating the most besides normal ice cream.

Sunday was my shelter shift as usual, and then that night my aunt and I went to see Bonnie Raitt.  We had the BEST time, although of course my aunt and I could have fun sitting and reading the telephone book pretty much, it's just how we are.  But Bonnie was incredible, she is such a great vocalist and guitar player.  My rock and roll lifestyle is catching up with me though, I desperately needed a nap by this afternoon!

This week is pretty mellow for the most part.  I am obviously doing my lactose challenge and will recap my experience at the end of the week!