The weekend was pretty good and most of the excitement for Eric and I was Friday night because it was the Rock and Roll Hall of Fame ceremony.  HBO isn't showing the ceremony until April 30th, but since we're mega dorks we put Eric's twitter on Chromecast and monitored for information and bootleg clips.  Between that and Youtube clips we were able to watch most of the ceremony, although it was crappy sound/video quality.  We ooh'd, ahh'd and drank.  I drank so much that I then made gluten free carrot cupcakes with cream cheese frosting. 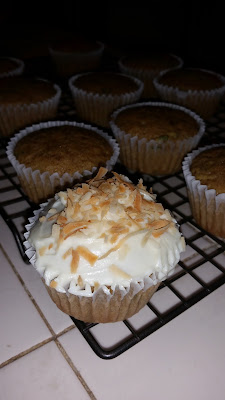 Against my better judgement, I decided to have a cupcake with frosting when I'd planned to just have the cupcake part.  Cream cheese in on the high FODMAP list for the diet, but as you can see, the cupcakes looked so beautiful with their glorious snowcapped frosting and coconut flakes that I just had to have one.  Within 20 minutes I had horrible stomach pains and bloating, it was absolutely gnarly.  Because I am a glutton for punishment I tried one again the next day to see if I would have a similar reaction and I didn't really, although I didn't feel great afterwards.  I feel a bit guilty that I "cheated" so close to the end of my elimination phase, but I guess I should be mildly prepared now that adding lactose back in may go poorly.

On Saturday I was able to meet up with Katie from Runs for Cookies and a couple of her readers.  To make it extra confusing, the girl in the middle there is also a Katie and is one of my readers as well.  (Hi Katie!)  We all had a really nice chat, and I'm glad that RFC Katie had such a nice time in Portland plus a great race! 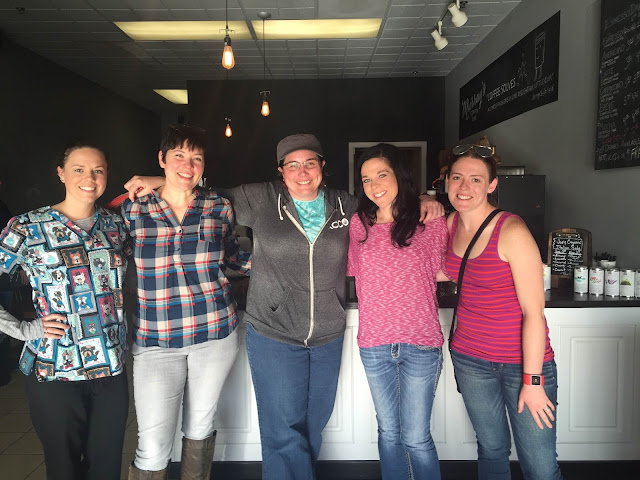 Afterwards Eric and I decided to run some boring married people errands, exciting stuff like getting Molly a new bag of food and going into Target for one specific item, leaving without that item while buying a ton of random stuff.  While we were there I had a clandestine meeting with a bad boy... 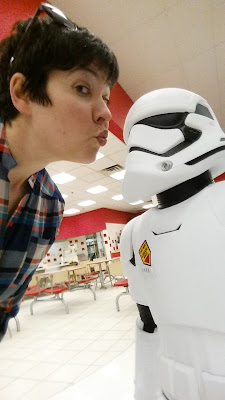 I also bought...wait for it....a size TEN pair of shorts.  I couldn't believe it.  Now, I'm not that naive, I think a little bit of that is vanity sizing since I tried on another pair of shorts that was a size 12 and tight.  But, I'm very excited that this will be the first summer EVER that I will feel comfortable and confident wearing shorts.  I'm especially motivated because of our Los Angeles trip in July,  partly because of vanity and partly because it will be hot AF there in July.  For once I want to be able to dress comfortably against the punishing LA heat!

On Sunday I had my shelter shift as usual, then Eric and I took a nice hike at a nature park near our house.  We walked for well over an hour, it was just nice to be outside in a quiet place, just chatting and being together.  That's the best kind of exercise, when it doesn't feel like exercise!  When we left the park I had a next from my aunt asking if we wanted to meet them at a local beer pub, so did!  We sat for four hours just catching up, laughing and acting silly.  I sadly can't really have beer due to the whole gluten thing, though I did sneak a couple tastes of beers from everyone else.

While I did purposely have a couple of high FODMAP items this weekend, I am otherwise in a much better place with the nutrition thing than last month.  The frozen vegetables have been the key, and it makes me feel SO dumb that I didn't do it sooner.  This week's bulk cooked grain du jour is quinoa, so every day I just grab a scoop of quinoa and top it with a variety of frozen vegetables.  (Today was carrots, green beans and spinach).  BOOM, easy, stress free lunch.  It's also good to have a ton of vegetables available that aren't going to spoil.  I'm not saying it's thrilling, but I oddly enjoy the simplicity of it, especially since this whole diet thing has made me hyper aware of how I feel.  Now if I eat something that doesn't set well with me, it is immediate and very noticeable.  I didn't realize how much heartburn and stomach pains I was having until I started this diet and now basically have none of that.  I literally felt like crap all of the time and just didn't realize it.  When I have something that my stomach doesn't like, it's pretty swift to let me know.

I am oddly nervous about starting to add food back in because I feel really good right now, and I'm scared of feeling sick again if I start adding things back in.  Logically I wouldn't eat those things if they make me sick in the testing phase, I guess I'm just scared of the testing process since I don't want to be constipated again, and I worry that something will trigger that.  It's nice to be somewhat regular again and I don't want to lose the progress I've gained.    I mean all I can do is test and move on with my life, but it's still scary.

I am not too optimistic about my weigh in this week due to being a woman nonsense.  Less said about that the better, but I suspect I'll be up a pound due to bloating and other assorted fun.  It never fails, I have the best week of my weight loss journey, and then my period swoops in to keep me from getting to cocky about it.  Anyway, we'll see though.
Posted by Runs To Get Waisted at 9:19 AM