So our poor dear Molly has been very sick since Saturday night.  I'm happy to report that she's almost back to 100%, but it was definitely stressful and debatable for a few days.  In a nutshell she was having major, horrible stomach distress with vomiting, the runs and all that fun stuff.  She was somewhat better Sunday but then hardcore relapsed on Monday.  She quit eating food and drinking water, there was an emergency vet trip AND a normal vet trip involved.  I worked from home for two very stressful days, tried to comfort her as she was so sick, cleaned up dog vomit out of my new-ish car and cried a lot.  We've been without our last dog Natasha for 3 years, but those wounds still feel fresh and like it happened just yesterday.  I won't lie to you, at one point I was freaking out that I was going to have 2 dogs die within 3 years.  Thankfully Molly has recovered, though my credit card may need a doctor by the time things are said and done.


So that is the negative part of the week, I just kind of wanted to get it out of the way!

In happier news I have indeed found my big girl panties this week AND put them on when it comes to my diet.  I got to Trader Joe's and stocked up on a lot of FODMAP friendly fresh and frozen vegetables as well as lean proteins.  I've actually done quite well when it comes to eating in a more balanced and healthy way, and I definitely feel better because of it!  Like today, I was just going to bring a scoop of rice and a bit of leftover turkey for lunch, but I took the time to slice up a carrot and a squash to add to the top of it.  It made the meal much more filling and interesting and added extra bulk and nutrition with very few calories.  It literally took 30 extra seconds to do it, and it's the kind of thing I've been needing to do!

I've also been very diligently tracking in MFP (no more "eh, I'm not going to add the last 3 things I ate because I don't feel like it or want to acknowledge it").  I feel like I'm finally pulling out of this funk.  I am on my elimination phase for the rest of this week and all of next week, so starting the 18th I'll begin the "challenge" phases.  I know I promised I wouldn't bore you guys with my diet stuff, but I do want to write about my challenge phases for my own tracking purposes, plus who knows, maybe it will help someone out there.  I'm excited but nervous to see how things go and what I will ultimately be able to add back into my diet.  I think some things like onions will be a no go, and other things will be fine infrequently in small amounts, but I won't know until I get started I guess.

I'm also back to exercising, and have really been digging this one barre workout from Fitness Blender.  It's challenging in the best type of way, where I'm eager to keep doing it until I can ace the whole thing (flutter kicks you will not defeat me!) instead of dreading it.  I can't recommend Fitness Blender enough in general, they have fantastic videos and I've really enjoyed every one I've tried.  (I promise I'm not a paid schill for them, I just really like them!)  I'm also redoing my dumbbell challenge for the month of April, but this time with 10 pound weights.  I'm pleasantly surprised how much I like doing the weight related stuff, and I'd really like to work towards being able to do that challenge with 20 pound weights.  That will be awhile since 10 pounds is pretty darn challenging, but it's a good goal to work towards!  I've always had weak little arms (cue the Dirty Dancing "Spaghetti arrrrrrrrrrrrms!!"), so I'd like to change that.

Finally I wanted to leave you with this really awesome carrot cake baked oatmeal recipe I made on Tuesday. 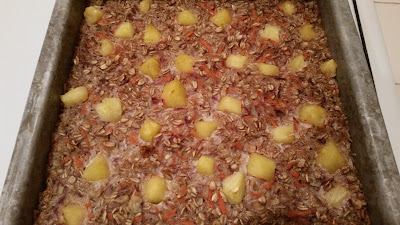 I based it on this recipe from OhSheGlows.com, but I did make several changes.  For starters, mine isn't vegan, I did use regular old milk since I can't have almond milk on this diet.  I used lactose free whole milk, because I'm not about the skim milk life.  Seriously people life is short, drink whole milk.  I can't have raisins so I omitted those, but I did add in a half cup of unsweetened coconut and a cup of fresh pineapple.  Y'all....it was so delicious.  The serving size on her recipe is 6, but honestly I made it 4 servings because I like bigger meals and don't really do snacks.  Admittedly my version was pretty high calorie at 587 calories, so you could either cut out the whole milk/coconut and use almond or skim, or just reduce the portion size.

Tomorrow is Thinner Thursday and will also mark the first time I've weighed in like 2 weeks.  Yikes!  Will be interesting to see where I'm at.
Posted by Runs To Get Waisted at 6:56 PM