Our Arizona trip was a whirlwind but very nice.  The Bruce Springsteen show was fantastic, our seats were very close to the stage to the point that we could make eye contact with the band which was a combo of amazing and awkward. 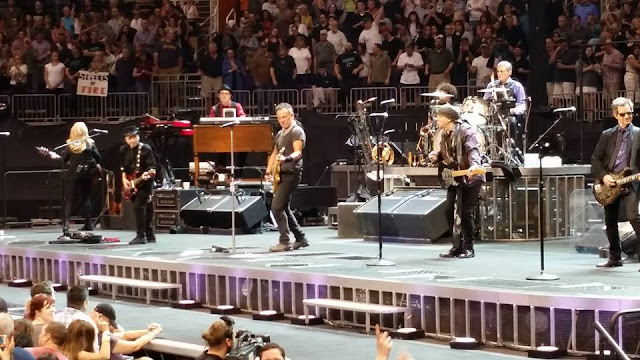 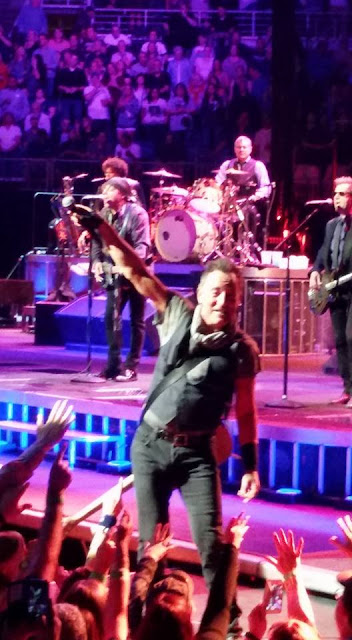 The weather in Phoenix was crazy, it's been in the 40's and raining here (I think the weather people said the other day we've had 90 consecutive days of rain), so going to sunny with temps in the 90's was definitely an adjustment.  We took a stroll around the block where our hotel was just to stretch our legs, and we were both ready to get back inside afterwards.  Dry heat my ass.  (I've never understood that statement.  Dry heat, wet heat, it's all flipping hot!) I was very happy that my Lovely Ladies kept on me about being hydrated the week before because I was parched in Arizona!  I did really well and still drank 70 to 80 ounces of water on Thursday and Friday, but even felt dehydrated between sips.

I did do a barre exercise video in our hotel room on Friday, though it was pretty gentle and not exactly a huge calorie burner.  Better than nothing though.  I really need to get my butt into gear because I'm super behind on the March to May challenge my LLL group is doing.  I just realized I probably forgot to mention it, but we're doing a challenge similar to the one in the winter where we each make a goal for how many minutes of activity we will strive for that month.  My goal is 1500 minutes and I am so behind!

Things are still going pretty well on my diet and I am definitely noticing positive changes.  It's all very gradual, but I definitely think my digestive system is getting better.  That's the good news.

I did as well as I could in Arizona, I packed a lot of food for the plane and ate a good breakfast before we left, so that was all fine, it's trying to eat out that's the issue.  It is very hard and stressful to find things that work with the whole FODMAP thing, and I hate having to be THAT person who is all "um is this gluten free, etc".  And honestly the gluten free thing isn't the problem, onion and garlic is my downfall.  It's in EVERYTHING.  I ordered fish tacos for dinner on Thursday and am pretty certain that not only was the fish seasoned with garlic powder, but the girl accidentally left onions in the tacos.  I was able to pick out the onions but I think I accidentally left one or two in there.  I felt a bit miserable afterwards, and was even more miserable to have further confirmation on my suspicions that onion and garlic do indeed affect me.  The same thing happened at Panera on Satuday.  Amazingly enough their menu is incredibly limited for me, as in there was exactly ONE thing I could have, some kind of quinoa salad.  I stupidly zoned on asking them to put the dressing on the side, and realized two bites in that the dressing clearly had some kind of garlic and who knows what else in it.  I was so hungry that I just decided to say screw it, and immediately regretted it after eating.  I was incredibly nauseated afterwards, experienced some bloating and  bad stomach pains that lasted for hours.  I checked the ingredients of that salad later online and it was full of dehydrated garlic and onion.  I mean you live and learn I guess, but I despise feeling stressed out when it comes to eating out.  I definitely learned my lesson, I can't just spontaneously go somewhere without checking the menu, plus I should probably eat a decent snack beforehand just in case.

Ironically we went to Powell's bookstore after lunch as I was feeling like I was going to die, which inspired me to pick up this book: 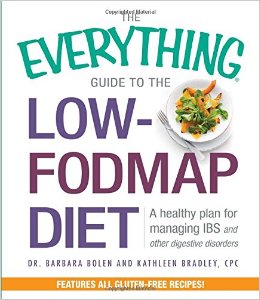 The first part of it is a lot of scientific information, which I actually found very interesting and helpful, and also a detailed plan on how to start adding foods into your diet once the elimination phase is over.  The second half of the book is a cookbook which is mainly what I was after.  I just feel a bit lost in the kitchen and needed some inspiration since I'll be doing this thing for awhile.  I feel a little more confident and will probably start testing out some of the recipes next week.