So I think I am going to officially change my weigh ins to Thinner Thursday.  For some reason my weight climbs or stalls on Wednesdays then dramatically drops on Thursdays (or sometimes Fridays).  While it is a vanity thing to go with the lower weight day, I also think it's a truer representation of my actual weight.  I can see the difference in my body, and I know I'm doing the right things (obviously if I'm losing), but for some reason my body holds on to it on Wednesdays.  Of course as my ladies said, I'm sure now my body will start being ridiculous on Thursdays.  ;)

I will talk about this more in my food section, but dropping back to 1500 calories is obviously more sensible from a weight standpoint being that I lost a pound instead of a fraction of a pound.  I figured as much, but this is why you've got to constantly tweak and evaluate everything.

The Superbowl was fun, though I thought the game was a bit boring.  I totally was rooting for Denver and was happy they won, but would have liked a bit more excitement.  It just seemed like this grinding defensive battle the whole time and it was just kind of meh.  I know this isn't popular to say, but I actually don't mind Carolina and wouldn't have been super bummed if they'd won either.  I know a lot of people hate Cam Newton, and I totally get it, he definitely has a TON of growing up to do and his personality doesn't exactly make him loveable.  But I think it's fun to watch him play, plus I forever love him for giving a humbling ass whipping to the Oregon Ducks when he played for Auburn.  You could come to me and be like, "But Mary, Cam just stabbed someone," and I'd hesitate and be like, "But he beat Oregon."  Not really, but close.  ;)

And GAWD the commercials this year.  They need to fire some bitches, because that's about the worst set of commercials I've seen.  The only ones I loved were the Doritos one with the dogs, and of course loved the wiener dogs that were dressed up like, well, wieners.  Too cute.  I also really loved the Audi astronaut commercial.  And I think we can all agree that PuppyMonkeyBaby or whatever the hell that was needs to be set on fire and then drowned in a lake of holy water.

On the food front I get an A for effort and a D minus for execution.  So, my aunt and uncle are also on My Fitness Pal, and have both done AMAZING work on their weight loss.  My uncle has lost around 20 pounds and my aunt around 30, they look fabulous and are in maintenance!  Anyway, we are comical now in our MFP obsession, so I logged each of the recipes I made and put it to where they could copy my recipes over to their logs, and my aunt put her deviled eggs into her recipe thing to where we could copy them over to our logs.  So all of that is great, and honestly, my spread wasn't too terribly unhealthy. 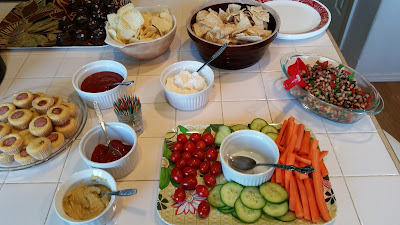 I had mini corndog muffins, chips, black eyed pea salsa, Buffalo chicken meatballs and cut veggies.  None of that is too terrible, but my desserts were pretty caloric despite them being tiny!  I made mini cheesecakes and the Pioneer Woman's mint brownie bites, both delicious.

So we all went into it with the intent of keeping track, then the beer started flowing and then we lost track, and I finally just shrugged at life and had another corndog muffin.  My stomach was awfully mad at me later on, but it was worth it for the mini cheesecakes.

So I thought that dropping back down to 1500 calories this week would be difficult, but I'm finding that it's actually been okay for me on a hunger level.  There have actually been days where I have to throw a couple extra pieces of fruit in my lunch bag just to make sure that I hit a reasonable deficit.  I find that I'm back to a point of craving raw fruits and vegetables again, which is always a good point to hit!  You definitely get a lot of bulk for not as many calories, plus fresh fruits and vegetables are so much prettier to look at!

Everyone always goes on about breakfast for dinner and rightfully so, nothing excites me more than having pancakes for dinner.  My otherwise wonderful husband does not agree, so I have to save pancake dinners for when he's on trips out of town!  Tuesday morning I thought, why not dinner for breakfast, so I made a really lovely salad. 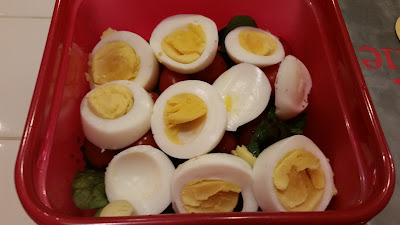 It's hard to see but it's 2 cups of spinach, 2 hard boiled eggs, 1 cup of cherry tomatoes, 1 slice of crispy bacon, 1 tsp of avocado oil and 1 tsp of balsamic.  It was delicious, filling and only 300 calories!  I usually have yogurt or cottage cheese for breakfast on weekdays, so this was a nice change of pace.  I had another "dinner for breakfast" salad yesterday morning that was super tasty.  I used some leftover brown rice from dinner, spinach, tomatoes, hard boiled eggs, and sour cream to make the most random salad ever, but it was really good!

I also felt randomly inspired to use up a bunch of vegetables in the crisper and rescue the ever forgotten bag of quinoa that always seems to be in my pantry.  I think we've had this discussion before, I actually like quinoa quite a bit but it never crosses my mind to make it for some reason!  It's not like it's difficult to make plus it's very versatile, but I just forget.  I decided to make a salad with a lemon and honey dressing to take for lunches since I am kind of tired of the same old things. 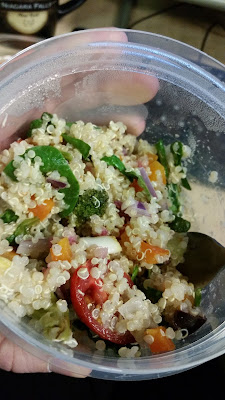 I was very pleased with how it turned out, it was very tangy with the lemon dressing I made and there were so many different flavors and textures from the million vegetables I threw in there.  I loved all of the colors going on!  Hopefully I remember all of them, but I used orange bell pepper, spinach, tomatoes, olives, broccoli, red onion and cauliflower!  It too was only around 300 calories.  I always say this and fail, but I really need to do quinoa salads like this more often!  But for real this time.  :p

I know a lot of my readers here read Runs for Cookies, and honestly I think most of you came from Runs for Cookies in the first place!  I am sure by now you've read her post about people stealing not only her images, but her actual blog posts.  I felt so incredibly bad for Katie, she is so inspiring and has worked so hard not only on her blog, but herself.  It sucks that people just can't behave themselves and respect copyrights!

It does get my wheels spinning.  I mean I'm not even 1/10th at the level of readership she must have, and part of me hopes that I never get to that place because then I'll have to worry about dumb asses stealing stuff from the blog.  I mean, the world is crazy anymore

Obviously I've got a bit more weight to lose before I post some grand before/after picture, I'm nowhere near goal, but I think that's what worries me most.  I don't want some asshat to use that kind of photo in a false promotion or steal it for some gross weight loss drug and claim it's from that.  That's exactly what happened to Katie.  I already feel incredible sadness over how led astray people are in the weight loss world.  They are desperate, they want their lives fixed, and a lot of people desperately want to believe that quick fix du jour will help them.  Then it doesn't work and they are left feeling all the more hopeless.  Hell, I was one of those people until I finally got it through my thick skull that calories in/calories out, exercise, lifestyle change and consistency are the only things that work,  Anyway, it would make me rage if someone used my picture in that kind of bullshit because I'm violently against all of those types of products and programs.  And Katie is way nicer than me, I would be calling bitches out coast to coast if my image was used in a fake promotion!

Anyway, it's not likely this type of thing would happen, but it's a good gut check for me on privacy and making me think about what I share vs. what I don't.  I don't feel like I share a ton of stuff, but I will definitely be watermarking for the days where I do before and after shots!  I am also going to look into disabling right clicking on my blog.  Sorry if that bums anyone out, but I want to make sure I'm somewhat protected, though I know that's not a 100% solution.