As you might have guessed, I weighed yesterday and my weight was up, but I knew it would be down today, so I decided to have Thinner Thursday instead of Weigh In Wednesday.  Yep, I'm still vain.

So, I did lose and that's great and all, but after testing out a 1600 calorie daily limit every day for over a month now, I've come to the sad conclusion that I just simply don't burn enough calories to warrant that high of a limit, so I decided to bump back down to 1500 calories.  I'm just not seeing the losses that I expected, and while losing weight slowly is healthy, things are too slow.  I know it's because I'm not getting enough activity for the calories I consume, and I don't see that changing until the weather here improves a little and it starts staying light later in the evenings.  It sucks but honestly, I am not so hungry every day that I think it will be a huge sacrifice.  And I figure if I really want treats then I can move my ass and earn them.  When I get in a regular running rhythm or doing some harder workouts, then I'll feel a little more entitled to bump my limit back up.

Since Saturday I've been in a hell of my own making since I decided after 5 years to FINALLY get our guest room painted.  The house we live in now is the house I bought at 24, and like any 24 year old with her first house who'd never been allowed to decorate the way she wanted, I went completely bonkers when I moved in and painted all the rooms upstairs different colors.  My upstairs looks like a pride parade exploded, and it was fine when I was younger, but now I just hate it.  The guest room is a really dark green, a color my beloved late grandmother would have referred to as "goose shit green".  I'm embarrassed when we have guests come because it's not only an ugly color, but the room is so small that the paint job makes it feel dark and oppressive even in broad daylight.  I've wanted to paint it a lighter color for a long time, but painting sucks.  I absolutely despise it, not to mention that we have vaulted ceilings upstairs (one wall of the room is probably 12 to 13 feet tall) so I knew it was going to be an absolute bitch to paint.  But after learning my sister-in-law and her husband would be staying with us later this month, I decided to once and for all paint the room and make it look nicer.

I blocked out 2 weekends on the calendar to get everything done without it being overwhelming.  This past weekend was supposed to be prepping the room, moving things out and taping all of the baseboards part and the following weekend the actual painting part.  I made such good progress though that I was able to get ahead of schedule and put part of the first coat of primer on the walls, but then hit the wall a bit and had to take a break Sunday.  This week I've been finishing up the rest of the first coat of primer and applying the second coat to ensure the green is completely covered, and it's been an absolute nightmare.  I am terrified of heights so being on our 8 foot ladder is torture for me, especially since to get to the nooks and crannies of our bizarrely shaped vaulted walls, you pretty much have to stand on the step that's just below the "don't step up on this bitch or you'll fall and die" step.  I've spent this week feeling like someone beat the crap out of me with a bat due to my shaking, the weird crouching and stretching I'm having to do, etc. 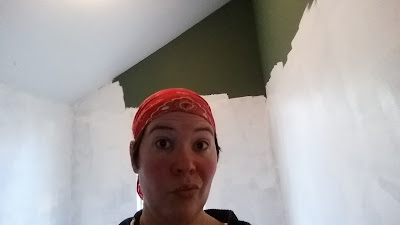 I texted this pic to my aunt on Saturday, and that has pretty much been my face this entire week with maybe a dash more terror.  Cameo appearance by the OG goose shit green paint color which is now thankfully all gone!  With some help from Eric I was finally able to finish up both coats of primer last night, so I will be able to walk in Saturday, slap the actual paint up on the walls and be done with it.  I discovered that as ridiculous as this sounds, having Eric just stand by the ladder makes me feel safer and made me feel a little more empowered to finish painting, so I was able to get that part done faster.  I call him my comfort horse (like the horses you see walking with the nervous race horses before they put them in the chutes) for a reason!  I know I'll love it when everything is done, the room already looks a thousand times better with even just the ugly flat white primer on the walls, it's just the during part that sucks.

The rest of the week is going to be pretty basic other than my painting project and Superbowl Sunday.  We are having a quiet little Superbowl get together with my aunt and uncle, which will be cool.  I have a fairly healthy menu planned for the savory stuff, but will have good desserts since that's where I like to spend my calories.  I probably should go for a run between my shelter shift and the party so that I can earn some treats!
Posted by Runs To Get Waisted at 8:35 AM