Hey all!  This morning's weigh in put me at another loss, so yay!  While I would have liked to have seen a little more of a loss, obviously almost a pound is good.

I will say that there are about a million places that I could tighten up my calorie intake and tracking to see better losses.  I mean I am losing each week, but I feel like there is more I have to lock down before I get the glitter cannons and 40 piece band going for myself.  While I am enjoying my walks and the stair stepper, it doesn't torch quite as many calories as I'd like, so I need to either ratchet my activity up, or alternatively drop my daily calorie allotment back down to 1500 calories.  Also I am not 100% diligent in tracking, there are things like a tsp of butter or a splash of half and half here and there every day that don't get tracked either because I get busy and forget or I get complacent.  Those things do add up, so now that I've really regained the habit of daily tracking, it's time to tighten things up.  Overall I'm still pretty pleased with how things are going, I just need to make small tweaks to improve.  I feel so much better and so much happier watching that number go down.  The 180's are not that far away.

One of my goals was to decide on a goal weight by March, but I think I'm ready to just go ahead and make a goal now.  The more I think about it, I feel like me not setting a goal weight range has been due to a secret fear of not being able to reach said goal.  I don't want to think like that anymore, even subconsciously, because I know I can achieve just about anything I set my mind to so therefore there's nothing to be afraid of.  I mean seriously, all I have to do it count calories, move my body and eat sensibly.  I know it works so there's really nothing to be scared about at this point.  After doing calculations and research I decided that I really want to get down to the 130-135 range.  It's lofty but the more I think about it, I think it's the right range for me and will be the weight I'm comfortable and happy at.  I'm actually pretty excited about the prospect, especially since if I keep at it, I could be there by the end of the year.  The smallest I've ever been was 140, and that was like 700 years ago when dinosaurs roamed the Earth so, the 130s will be interesting.

I was all philosophical and shit the other day about my weight loss, just reflecting about how I've changed for the better in little ways and I feel like the more I lose, the more I gain.  I'm rediscovering my love for fashion and suddenly realized how I want to put the effort into looking pretty and put together again.  Nothing crazy, just nicer clothes and looking casual but chic.  The more weight I lose, the bigger the urge I have to invest in myself, and it's a really nice feeling actually.  My legs are getting more and more toned due to that stair stepper, and I am obnoxiously excited when I do certain stretches and see my thigh muscles pop out.  It feels good to see that physical progress and to feel healthy.  Instead of hating my body now, I recognize that yes I have improvements to make, but I also see how much I've already done and acknowledge how fantastic that is.  There are a million more little things every day that I notice, mainly that I feel about 50 times more alive, energetic and happy at 36 than I did in my 20's.  It's taken a very long time and a lot of emotional thrash and nonsense to get here, but here I am.

Anyway, enough with the schmaltz so that I can segue in to a talk about food!  I haven't really made any new recipes lately but wanted to give a tip on making breakfast sandwiches that I thought some might find helpful.  I really love breakfast sandwiches, they're a great break from the yogurt and cottage cheese type breakfasts I normally gravitate towards to, plus they're super filling and freeze well if you make in bulk.  Anyway, my tip is to scramble the egg and pour it into a ramekin (spray the everloving hell out of the ramekin with cooking spray first) and bake it.  That way you get a perfectly round egg disc that fits nicely on an English muffin!  It's just a simple trick that makes things nice and symmetrical.  You kind of have to eyeball it, I baked the egg at 350 degrees for probably about 15 minutes, but my oven is psychotic and I have to watch it like a hawk. 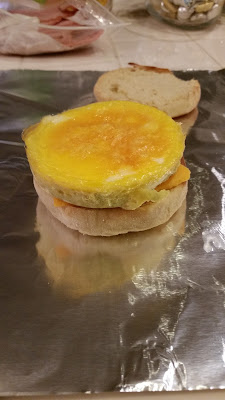 I'm not a huge meat at breakfast person, but I did put a small slice of ham on these sandwiches.  And cheese, because eggs and cheese shall never be separated.  As my mother would say, "it's just not done."

My other thing is a PSA for salad because that was part of my weight loss musings the other day.  People get all janky about weight loss and the perception is that if you're losing weight then you're just eating salads, said salads are only made of plain lettuce leaves and that you must be miserable eating them.  And you kind of go along with that mentality, because no one is supposed to say they like salad, and no sane person would have a salad over say a burger.  But screw it, I'm just going to say it.  I actually kind of love salad.

I don't get the salad hate.  Besides the fact that they can look beautiful and taste amazing while still being healthful, there are literally thousands of combinations you could make so you couldn't possibly get bored.  I've been rocking the best roast beef salad this week for lunch, and both days I was actually excited to open my lunch pail to get after it.  I enjoyed it the entire time I was eating it, was sad when it was all gone and felt full afterwards.  This literally took nothing to pull together.  It is just romaine, cherry tomatoes, shaved carrot, hard boiled eggs and deli roast beef.  It was delicious and barely even needed dressing. 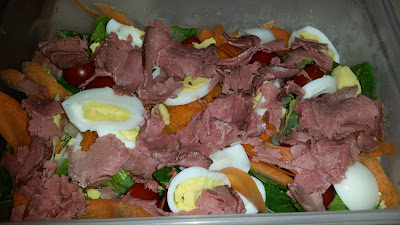 Salad certainly isn't all I eat, but I do enjoy them and think it's weird when people diss salads or act like you're supposed to be miserable eating them.  I don't know that salads need a PR campaign but what the hell, I'm putting myself out there as Team Salad.

And because I can't go without off topic topics, I had to share my latest "I'm about to explode" source of happiness.  Brian Wilson of the Beach Boys recently announced that he was doing a tour in honor of the 50th anniversary of the Pet Sounds album, and amazingly enough it's coming here.  I was able to get in on a presale today and get tickets, which just, oh my God.  First of all, I am a nervous ticket buyer to begin with, but for something like this I was literally about to have a stroke.  I of course got tickets, but my adrenaline was so crazy afterwards that my hands were shaking.  So ridiculous.  I rarely have awe filled moments with concerts, but I feel incredibly fortunate to be seeing Brian Wilson for the SECOND time, and to hear Pet Sounds performed.  I am literally doing the Wayne's World "we're not worthy" thing over it.  I am also so excited because Eric (and my aunt/uncle) is coming with me.  There were so many times at the show I went to last summer where I wanted him to be there.  BW isn't his "thing" really, but being the music guy he is I knew he'd appreciate BW's band.  They are amazing and on point, and I know he will enjoy this show.  There are also a couple of Beach Boys songs that make me think of Eric when I hear them, not to get all sappy and romantical, but it's true!  My uncle was also part of the "eh not my thing" crowd, but I put together a CD of the more obscure Beach Boys stuff and I think he gets it now and appreciates them.  That or he's scared to admit otherwise around me.  ;)

As a bonus, one of the songs that makes me think of my beloved.  :)


Also lastly, poor Molly is in sad panda mode over our new couch arrangement because she is now by herself and isn't laying next to me in the evenings clawing my arm to demand pets.  (Trust me, I am less sad about this.)  Sometimes she whines so pitifully that I'll go sit next to her on the old couch for a bit so that I can love on her.  I had to do it last night and the look of adoration on her face was so cute that I had to capture the moment. 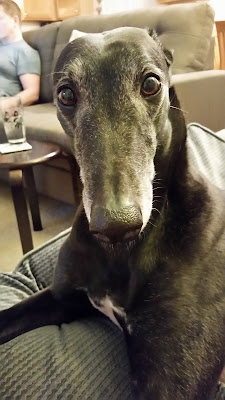