I honestly couldn't be happier with how 2016 is going, not only from a health standpoint but just a general overall standpoint.  Things have been relaxing, we've had plenty of time to ourselves, I've been sleeping great and just generally have a better attitude about life.

No official weigh in until Wednesday, but my weight has gone down numbers wise on the scale, so I am pretty happy about that.  Hopefully that will continue and give me a good "official" number on Wednesday!

Our weekend was pretty mellow and very domestic.  Friday night we rented this horror movie called "He Never Died" that stars Henry Rollins.  It was a very unique and fun movie, I say fun because while it is a horror movie it was very funny and not super gross like so many horror films are now.  I was actually able to go to sleep after watching this one!

Saturday we went shopping for a new couch.  The one we have has been in my family a really long time, and while I love it, it desperately needs to be recovered and get new stuffing.  I don't want to get rid of it because it's such a unique couch (it's insanely long), but it's gotten pretty uncomfortable and I don't really have the cheddar for a recovering project right now.  My sister in law and her husband are coming to visit us in February, so all of the furniture we're unhappy with became very evident!  We found a really nice little couch at a closeout price yesterday, so we snapped it up.  I was anxious because as we were getting the sales guy's attention, some woman came in shopping and was sitting on the couch we wanted.  I hissed to Eric that she was sitting on our couch and we'd better buy it ASAP lol.  We celebrated our purchase with a light lunch and beer at one of our favorite pubs, then relaxed the rest of the day.  I did take Molly for a 2 mile walk yesterday, which instead of wearing her out seemed to energize her into insanity.  Sigh.  Upon Desiree's recommendation we watched the documentary "Soaked in Bleach", and OMG if you are a Nirvana fan you need to see it!  Basically it's all about Kurt's death and that there is plenty of evidence that it was murder and not suicide.  I think even my very skeptical husband was a bit intrigued by all the evidence that was presented, and of course I've always thrown a side eye at Courtney Love, so I was definitely convinced.

Today has been really mellow, I did my shelter shift and it was really great this week.  The last couple of weeks we haven't had quite the large volume of dogs as previous weeks, so my cleaning stuff gets taken care of quickly and I've been able to spend an hour or more with the dogs working on training and socialization.  It really is so rewarding even though it can be sad sometimes. We had a dog come in who I'm pretty sure was used as a bait dog, but he is just sweet as he can be and so trusting.  I worked with a very scared dog today who slowly came out of her shell and not only easily picked up "sit" and "down", but eventually she very shyly came up and snuggled in my lap and wanted to be petted.  Apparently it was lap dog day, because most of the dogs seemed to want to be in my lap, including one of my favorite dogs (she is part of a court case so I'm omitting her name) who despite being 60 pounds decided that my lap was the best place to sit and enjoy the interactive toy I gave her.  It's pretty much my version of heaven, snuggling cute dogs for 2 hours!

I've continued to test new recipes this week and have a couple of winners that I wanted to share.  The first is a recipe from Cooking Light (shocker!) for beef tostadas with cheesy beans and cilantro rice. 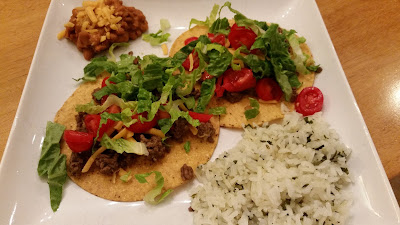 This is one of my favorite things I've ever made from Cooking Light, seriously.  It was so delicious, it tasted indulgent (but really wasn't) and was a great Friday night meal.  Seriously, who doesn't love Mexican food on Friday night after work!  I definitely will be adding this to the rotation!

The second recipe was for Giada's Grown Up Franks and Beans.  I heavily modified this recipe because some of the amounts of ingredients in it were outrageous.  I mean 8 ounces of bacon Giada, really???  Anyways, I only used 2 slices of bacon and it was more than enough, and I really could have gotten away with just doing 1 slice.  I used bratwurst instead of the hot sausage in the recipe. 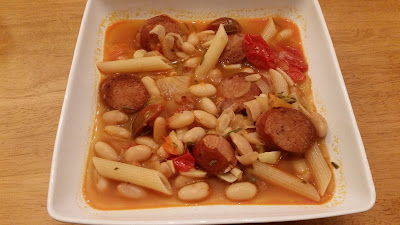 I really enjoyed this one, it was perfect for a cold evening.  I thought it was plenty spicy without having hot sausage in it, though I did put a few dashes of Crystal hot sauce in it. 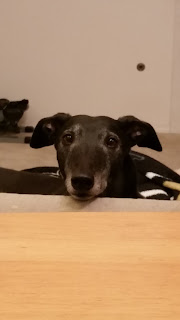 Molly always finds our dinners quite interesting no matter what they are!

At night for dessert I've been indulging in wine and Dove Promises.  I've been saving my wine for after dinner because I find that I will actually sip it and enjoy it, whereas if I drink it with dinner I tend to have too much.  Now I just take my wine and my 5 Dove Promises and enjoy it all on the couch.  Overall I'm happy to be back in my routine and back to tracking!