Today I'm going to be uncharacteristically orderly and have nice topic sections!

So I weighed last Friday as a "slay the dragon" weigh in to see where I was at, but I intend to do weigh ins on Wednesdays going forward.  I've always found that's the best day to do them since my body tends to go insane on the weekends no matter what I do!

Even though  I'm not a full week into my healthy habits and goals for January, I feel amazing and thus anticipated already losing a little something, maybe like a half pound.  I'm not going to lie, I was a bit deflated and surprised when I stepped on the scale this morning and it was still at 199.6.  After moping about it for a half hour or so, I reminded myself that my clothes are already fitting so much better and I feel good physically.  I'm comfortably wearing a pair of skinny jeans that I wasn't really able to wear 2 weeks ago, and I'm already confident wearing my more form fitting shirts instead of baggies.  For whatever reason the scale can be a sociopathic asshole sometimes and not reflect those types of feelings or changes so, I got over it.  I know that if I keep on doing what I'm supposed to do, the number will go down eventually, so I am just not going to worry about it.  One thing I am going to monitor, when I started back to tracking in My Fitness Pal, I bumped my daily calories from 1500 to 1600 a day.  If I don't see a change in weight next week, I may bump back down to 1500 to see if that helps.  Other than that, it's business as usual.

One of the fun things about rebooting and focusing on health and weight loss is that I'm much more focused on trying new recipes, and especially with it being cold and damp all the time I'm much more likely to pull out soup recipes that I've earmarked for a rainy day.  As y'all know, I'm obsessed with Cooking Light magazine and cannot sing their praises enough, I literally have kept every issue of them since I started getting it and am constantly going back and flipping through for ideas.  I've earmarked quite a few recipes to try, and I've tried a couple this week that I thought I'd share. 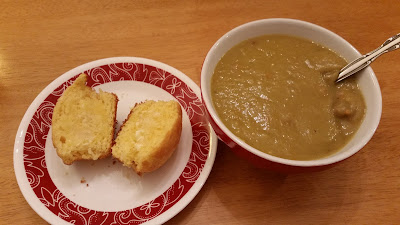 So true Hollywood confession....I had never had split pea soup until Tuesday night.  It's not something my mom ever made, nor something that has ever entered my mind in adulthood until I was browsing recipes in Cooking Light and saw that I had 95% of the ingredients to make it, plus it was a slow cooker recipe.  It was mindlessly easy to make (I did chop the celery/garlic/onion/carrot the night before), and while it's a very ugly soup, it was very tasty.  I didn't mash the soup per the directions but instead gave it a short whirl around my Vitamix since I like more of a silky texture in soups as opposed to chunky.  I didn't do the whole sour cream bit on top from the recipe and didn't feel like that detracted anything from the final results.  I did put several dashes of Tabasco on top of my soup, which was a really awesome addition.  In short, I'd definitely make it again, it's a nice soup for a cold day, plus it was super easy.  It also made plenty for lunches, (I found that I enjoyed it even better today!) which is always a bonus.  Click here for the Split Pea Soup recipe!

The serving size is a 1.25 cups.  The magazine listed each serving as 304 calories and 4.6 grams of fat a serving, but when I put the recipe in MFP it came up as 526 calories and 6 grams of fat a serving.  Not sure why the discrepancy since I followed the directions to the letter AND left out the sour cream, but I'm going with the higher number, especially what with the ham hocks and all.  It's the first time I've ever had a Cooking Light recipe not line up with MFP, so I'm just calling it a fluke.

Side note...I have tried every cornbread recipe known to man, but nothing surpasses those little boxes of Jiffy cornbread mix for me.  Seriously, it is the perfect cornbread texture and has a faint hint of sweetness.  I am usually Team Homemade, but nothing seems to beat Jiffy and at 99 cents a box, I can't argue with that.

So....I had a picture that I took of this lasagna after I pulled it out of the oven, but it was NOT pretty.  It's one of those foods that just looked gross, so, I decided to axe it.  Anyway, I was so excited to make this lasagna tonight.  I actually put together two 4 serving pans of these last week for the freezer while watching and weeping over the Kennedy Center Honors (seriously though).  I am a big fan of freezer things (insert "Freezes Beautifully" meme from Steel Magnolias that I could NOT find despite my best efforts), and when I can I try to stash extra meals in the freezer.  It's such a pain when you're making them, but so magical when it's a weeknight and you're all like "Hey, a lasagna out of thin air!"

I'm on the fence about this one, and sadly it didn't live up to my excitement.  It tasted good enough and was filling, but I kind of wish I'd baked one of the lasagnas right after putting it together.  I feel like the time in the freezer changed the sauce, and it came across as floury rather than cheesy.  When I originally made the sauce I was so impressed by how indulgent it tasted, and the nutmeg truly did add a special something to it.  Sadly I got none of that once it thawed and baked, plus I found that the spinach and mushroom were watery, so the noodles didn't have that crispness on the corners that I love in a traditional lasagna.  Some of that may have been due to the fact that they were no boil noodles, which I have yet to be impressed with.  I mean I didn't hate it, but I fear that it did not freeze beautifully, so I'd just make one large pan and bake it ASAP.  I also think it would be better with chicken breasts rather than thighs.  I don't want to totally dissuade you from making it, I just would recommend baking it right away rather than freezing it.  Click here for the Chicken Lasagna recipe!

Nothing crazy to report here, I've mostly been trying to get in walks during work hours despite us still dealing with fall out from the snow and ice storm.  The streets and sidewalks are still wet, and lately at night it's been dipping down below freezing, so it's a scene in the mornings!  My poor coworker almost ate pavement on our morning walk, but I was able to walk to the bank at lunchtime without bodily harm.  I did get in almost an hour of walking today, which is nice.  I think all of the ice nonsense is supposed to be over by tomorrow, so I'm going to spend my whole lunch hour walking.

I am also on day 6 of my stair stepper regime at night, and things are going well with that.  It's definitely a workout, so much so that the other night I literally went into the backyard when I was done stepping just to try to cool down.  I was able to stay out there for quite a bit even though it was in the 20's, that's how hot I was!

That's really about it for this week so far.  I hope everyone is having a good one!
Posted by Runs To Get Waisted at 8:20 PM