This weekend ended up being rather busy even though it didn't look that way from a calendar standpoint.  Friday night we went to a surprise birthday party for one of my old coworkers I hadn't seen in almost 2 years.  He was my account manager at the idiot place with no soul, and we always had a special bond.  Much like me he was just not cut out for our employer due to his introverted ways (sound familiar), and sadly ended up being laid off when Eric was.  Thankfully he's doing well now and is married to his childhood sweetheart.  He was TOTALLY shocked when he walked in and saw all of us sitting there, and we had a great time catching up.  He's changed for the better and seems a lot more relaxed and happy, which was good to see.

Saturday was super busy!  I started out the day by taking Molly for a 2.2 mile walk after breakfast.  I decided to go rogue and do the library park instead of our usual spot, it's just a lot more naturey and pretty, plus I had library books I needed to return.  I tend to avoid taking her there because sometimes asshats like to walk their dogs with no leash, but since it was storming I figured we were the only two beings dumb enough to go out in that.  We had a really nice walk, and I can tell that Molly was super into it.  She actually walked and was looking around the whole time instead of sniffing every little thing, which is her stall tactic when she's bummed out and doesn't want to walk.  The rain actually held off during our walk, which was a relief.  Sadly our horrible summer has segued into a horrible winter.  Usually we get some dry, cold days but it's mostly been storming since November! 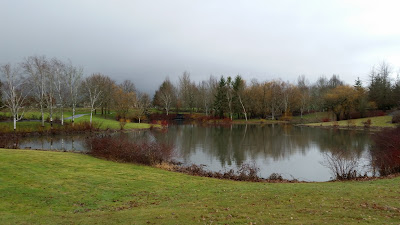 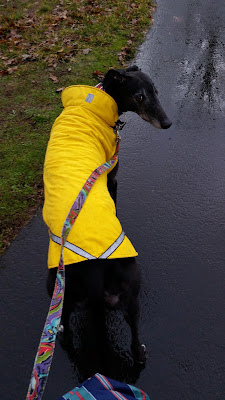 We didn't run into unleashed dogs, but we ran into something that irritates me almost as much.  Molly is a delicate flower, and much like her mom, she doesn't have much use for her own kind.  She absolutely loves people, never meets a stranger and wants desperately for everyone to pet her, but she is just not into other dogs.  It's the reason we ended up with her in the first place, she was a return from her first adopted home because she bit the lady's other greyhound and constantly was trying to fight the other dog.  Anyway, at best she's indifferent to other dogs, and at worst she will snarl and snap if another dog tries to greet her.  And I don't want to give you a bad impression of Molly, despite my grousing about her she's a great dog and has lovely leash manners.  She's never going to lunge at a dog or go out of her way to start a fight or anything, she just doesn't want another dog in her face.  And I totally get it, I don't want humans in my face and forced interactions most of the time either!

I have no way of knowing which way her emotional wind is blowing on a given day, she literally goes from zero to snarl, so I just try to avoid dog meets all together if I can help it.  This seems to completely flummox and bum out other dog owners, and many people seem disappointed and determined that our dogs should meet.  I always get the "my dog is friendly!" chirped at me, to which I want to say "great for you, mine is a petulant asshole."  I try my best to very cheerily tell people "she's kind of grumpy with other dogs, nothing personal", but I always get the "you're lying to me" face as the person hesitates to see if I will change my mind.  It's especially complicated since Molly will be wagging her tail furiously since she wants to meet the other dog's owner, not the dog, so she makes me look like a liar.  It's kind of frustrating because people will purposely slow down and drag their feet in order to try to make a meet happen, and just...no.  There was a lady yesterday who wanted our dogs to meet and I don't know, I just get so tired of having to explain it to people, especially when I'm out for a solo reflective walk.  I guess my larger point is, even if your dog is friendly you should always take cues from the other dog's owner on whether a meet is appropriate or not.  I'm not trying to be a dick to you and your dog, in fact I'm being nice and possibly preventing your dog from getting snapped at!

After we walked I went grocery shopping, then came home to make lunch and help Eric get our living room set up for our new couch!  Once we got the living room shifted around and cleaned, my job was to keep Molly upstairs during the "window" the movers were supposed to come.  They quoted us between 1 and 4 pm, and thankfully came at 2 instead of making us wait.  Even so, I was able to get some stuff done upstairs.  We absolutely love the new couch, and have threatened Molly within an inch of her life if she gets on it.  She doesn't mind the banishment though because now she gets the ENTIRE old couch to herself until the day I can get it recovered. 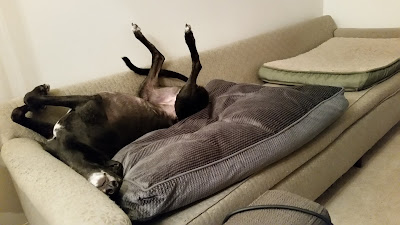 Today was shelter shift day and it was a good one.  We only had 5 dogs and the laundry/dishes were light, so I actually got to feel like I accomplished something, plus I got plenty of time to hang out with the dogs.  Since there were so few I really got to spend quality time with each one.  There was an adorable Chihuahua who just wanted to be held and would cry very pitifully when you'd put him down.  As soon as you'd pick him back up he'd snuggle and stop crying, it was so cute.  I have really come around on little dogs, I used to not like them very much at all, but I've definitely met some sweet little guys during my shifts.  It's a good thing Molly is bitchy and we're not able to have a second dog, I'd have already come home with about 9 of them.  ;)

I spent most of this afternoon baking a special treat for my office (and my aunt's too).  It is Carnival season (ie Mardi Gras), so I made a King Cake to take up to the office.  If you have not heard of King Cake, in a nutshell it's a special pastry served during Mardi Gras season that's kind of this cinnamon roll/coffee cake type thing.  The dough is braided, there is cinnamon sugar going on, then it's topped with glaze and the official Mardi Gras colors of green, purple and gold.  There is a whole historical significance behind it that you can read more in detail here.  The main thing you need to know is that they are DELICIOUS.  They are expensive as all get out to order from New Orleans, so I was pleased when I found a good recipe last year that is very comparable to the cakes you taste back home. 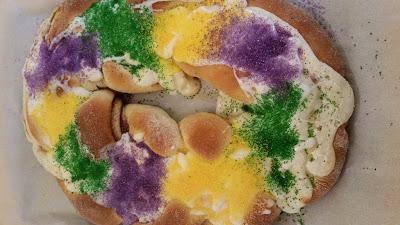 This week should be very mellow and I'm actually looking forward to weighing in Wednesday somehow!  I was really on the go this weekend, so despite having a slice of King Cake (did you really think I wouldn't?),  I think things will turn out well.  I have a good meal plan this week as well and have just about everything prepped, so it should be steady as she goes.  And I SWEAR I will write a review for my stair stepper this week!
Posted by Runs To Get Waisted at 7:33 PM