Happy 2016 everyone!  I hope you all had a wonderful New Year's free of hangovers and full of goal contemplation.  We had a really nice and boring evening.  They didn't let us out of work early (rude!), but we leave at 3:30 anyways so it really wasn't that big of a deal.  I came home, we put together a nice cheese plate and opened a nice bottle of champagne.  Believe it or not, that was all I had all evening alcohol wise, I must really be getting old.  Food on the other hand, well...we hoovered down quite a bit of the cheese, and then inspired by Home Alone 2, I decided to make myself a really huge, delicious sundae with a ton of toppings. 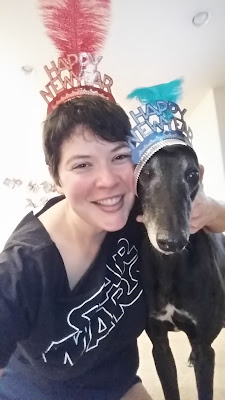 We listened to music (Motorhead, B.B. King, Stone Temple Pilots, Ben E King as a tribute to those we lost in 2015), tortured the dog by making her wear NYE hats and then turned over to the Anderson Cooper/Kathy Griffin NYE show at almost 9 pm PST.  I absolutely despise Kathy Griffin, but it's the least of all the evils.  We celebrated an East Coast midnight, and then were in bed by 10 pm.

Old people I tell ya.

The next day I was more than ready to turn over a new leaf and begin working on my goals and weight loss again.  I stepped on the scale with absolute terror, especially since I haven't weighed for like 2 months, but was shocked to see that somehow I was still under 200 pounds.  My lowest weight before everything blew up was 194.6, and I was 199.6 on Friday.  I'm totally thrilled that I was only up 5 pounds considering how horribly I've eaten the last 3 months, but that was a huge mental boost that I'm more than happy to accept.  Mentally, going back to tracking food and portioning everything has clicked very well.  I feel like I finally, FINALLY am in that headspace and am excited for it.  The physical part has been difficult this week, I'm back in that habit of eating so much that eating smaller portions has been difficult.  On Friday I was so hungry and thus went over my calories by eating ice cream, and last night I managed to white knuckle it and stay under despite desperately wanting to snack late.  Were I in a normal flow of tracking and exercising I would have honored my hunger and not white knuckled it, but I know this is my body's way of protesting and I'm going to have to let myself be hungry until I get used to normal portions again.

That being said, it perversely feels good to feel hungry again.  By the end of December, I couldn't remember the last time I actually felt hungry and not stuffed to the gills.  It was a disgusting feeling, so it feels good to feel lighter again.  It's been nice to focus on getting fruits and vegetables in the diet again, and while I can hardly crow about my progress at 2.5 days in, I've definitely gotten in my five-a-day.  I've been hitting up my Cooking Light magazines to plan meals, and tried out this new recipe last night for Chicken Sausage and Broccoli Penne.  It was delicious! 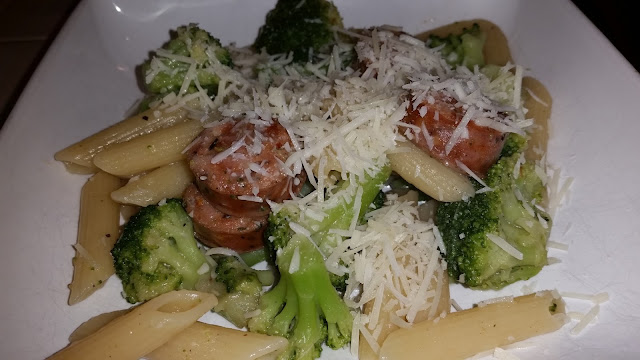 I've also gotten in activity every day, mostly just gentle, enjoyable walks, but I have honored my 15 minute per day commitment on my stair stepper.  So far so good, but that thing is no joke.  I was sweating bullets last night!  It is nice to have something I can step on quickly and get at least a little movement while watching TV.  Today we got a bit of a surprise and got a snowstorm (no, the weather people did not predict it), and since I turn into a child over snow and needed some activity, I made poor Eric go take a walk with me in it. 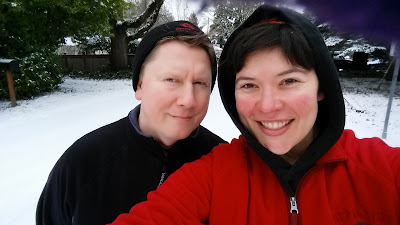 We walked for about 40 minutes, then I came home and shoveled our driveway and our neighbor's driveway because I'm a weirdo and like shoveling snow.  I mainly did it because I was so antsy and figured I might as well get in some extra activity, plus I fear tomorrow is going to be a shitshow due to predicted ice storms, so I figured it was best to clear the decks.  Oregon doesn't actually plow the roads here when it snows, nor do they put down any type of deicing agent or salt, so when we get snow it's a total scene.

I am also pleased to tell you that I have finished not one, but two books already!  Okay, don't be too impressed, I did start them a couple of weeks ago.  I'm fast but I'm not that fast!  ;)

I am so happy to be back reading again, and already feel like it's made such a difference in my life.  On weeknights we've been going up at like 8 pm and reading, and last night I went up at around 6 when Eric was watching a concert on TV and just powered through my second book.  Basically any time I am mindlessly surfing on my phone or laptop and am not actively doing something, I force myself to put it down and go upstairs where it's quiet to read.  I've noticed that I've been sleeping better and feel calmer, and that reading has made me feel more focused.  It's definitely been a smart goal for me and has fed my need to slow down and calm my brain a bit.

The first book I finished was Joyland by Stephen King.  I absolutely love SK but am so far behind on his stuff since he writes about 100 books a year.  In other words, he's the OPPOSITE of George R.R. Martin.  (Seriously George, still no Winds of Winter?)This one was pretty tame and approachable for an SK novel, but it's basically a murder mystery set in an amusement park.  It immediately caught my attention when I started it and I easily plowed through.  I mean it's certainly not the greatest SK book ever written, but it was really enjoyable.  The second book was Hot Freeze by Douglas Sanderson, and it was a bit of a quirky purchase that I picked up at a little bookstore in Seattle called the Seattle Mystery Bookshop.  It is a murder mystery published in 1954, and it is definitely of its time.  I'm actually surprised at some of the blatant sex and drugs stuff that's in it but you know, good for Douglas I guess.  There is a lot of slapping women around stuff that I wasn't wild about, but it was written in 1954 so I'll give it a pass.  It was a pretty decent book all in all.  When I was at the Mystery Bookshop they gave me 2 free books, so I started on one of those last night.  It's called Traveler's Rest by Keith Lee Morris.  It's yet another mystery/paranormal type book and has been pretty entertaining so far.