So full disclosure, my birthday was on Thursday.  Basically yes I'm a year older and still no wiser or emotionally mature.  :)  I will say, I did have a lovely birthday on the actual day.  I usually run my age in miles, but we've been having the crappiest weather ever lately, so I decided to walk my 3.6 miles during lunch instead.  It was storming and freezing, but I just grabbed an umbrella and made it happen. 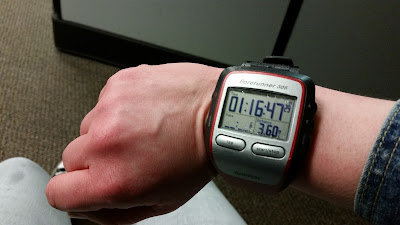 Eric took me to a nice dinner in Portland that night and I had a really wonderful time!  Friday I treated myself to a vacation day, and I swear, sometimes the best "vacations" are when you're just hanging out on your own and doing your thing.  So what did I do Friday?

1.  Molly and I resurrected the long walk 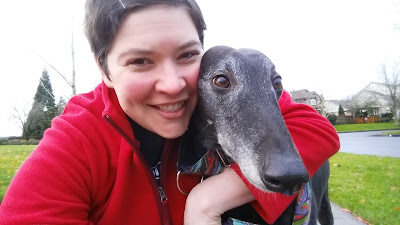 So when I was unemployed, one of the things I enjoyed most was being able to take Molly for a nice long walk every morning.  Without fail we'd go around the same time every morning to the same neighborhood and do anywhere from 1-4 miles depending on her energy level.  Molly amassed a little fan club of adorable older men and women who always stopped to dote on her every morning.  Obviously I was happy when I got a job again, but I do really miss being able to take Molly out and have one on one time with her.  She kind of gets 2 lame short walks around our neighborhood, which is about as nice and fascinating as a prison yard.

When I knew I was getting this day off, one of the things I looked forward to the most was taking my baby for a long walk, and she was SO excited.  Unfortunately the weather has been the absolute pits lately, so I literally had to check Weather.com for the hourly forecast to see when we'd hit a dry hour.  We were successful though and got a mile in before the rain started again!  Molly was so happy, which made me happy.  She even got bonus Momma time  because I took her in the car with me on errands a couple of times.  She's been clingy lately because we've been gone so much, so I know it made her happy to be able to hang with me.

2.  I got in the Christmas spirit

I had about a billion presents to wrap, so I turned on the movie "Love Actually" and wrapped everyone's stuff, even Molly's presents and presents for my aunt's cats!  It felt like a huge accomplishment to get it all done, and I had fun watching the movie too.  It made me think of my amazing Lovely Ladies group! 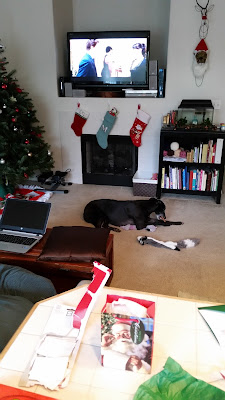 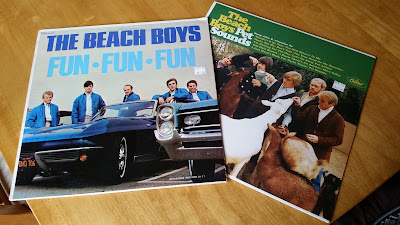 I've really been jonesing for a vinyl shopping trip, so I decided to treat myself at our local record shop and buy a couple of things for myself for my birthday.  I didn't really have time to do my usual bargain bin digging, but I bought myself a brand spanking new copy of Pet Sounds, as well as an earlier Beach Boys album.  Now that things are calming down, I can't wait to put Pet Sounds on this week and listen to it!  Brian Wilson is supposed to be doing a Pet Sounds anniversary tour next year, hopefully there is a date or two near us!

4.  I got transported back to childhood [Spoiler Free!]

The day I'd been waiting on for like 2 years arrived, and yes, I'm talking about Star Wars!  I didn't go in costume per say, but I did have my adorable Star Wars tights on with a cute dress, plus my R2-D2 scarf that Eric got me along with an awesome R2-D2 ring that my friend M bought me as a birthday present. 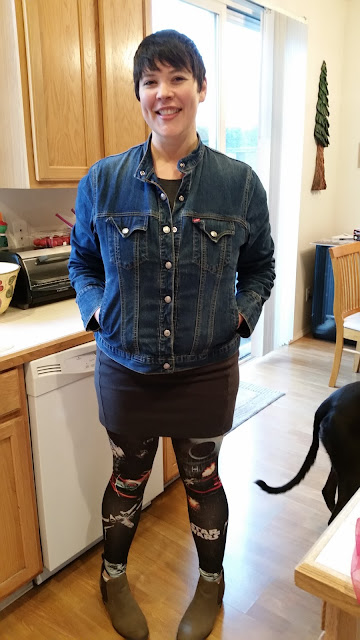 Obviously I won't write any spoilers, but for me the movie definitely lived up to the hype.  I didn't expect to get so emotional, but I started crying the second the credits came on and was super emotional during several parts of the movie.  I think even my stoic husband was misty during a couple of parts.  I wasn't expecting to warm up to the "new" characters, but ended up being won over by all of them (Rey is amazing!) and my heart just totally stolen by the new droid BB-8!  The script and the casting for the movie was just perfect!  If you're a fan, you'll definitely like the movie.

The rest of the weekend was decent, though I unfortunately started getting sick late Saturday and felt like absolute garbage all day yesterday and feel even worse today.  I had to take my first sick day ever from work today, lame.

I did end up passing my Level 2 certification for the shelter on Saturday, though things are such that I don't foresee being able to practice my skills or benefit from the new level much until we get another Level 1 on my shift.  Cleaning the dog's kennels while they are being walked is priority, so on Sunday that was 98% of my shift.  (That and dealing with a scary AF situation with a terrifying German Shepard who I think might actually be insane).  I got about 5 whole minutes to spend with the dogs in the kennels doing training and enrichment, which made me kind of sad.  I reached out to our volunteer coordinator to let her know we need an extra person, so hopefully they can get some help soon.  We've just had a crushing volume of dogs lately compared to when I first started, which is a lot of the problem.  Sadly I don't see that improving anytime soon.

I was happy working with the handful of dogs I got to spend time with, some of them really are so smart.  One of them is a 10 month old Black Lab, who I suspect was gotten as a puppy, never trained and then dumped at the shelter when the person couldn't handle her.  She is just insanely excited all of the time and loves to jump, but actually is quite smart once you work with her.  I spent a few minutes with her, and was able to get her to sit very readily and worked with her on settling on her bed and practicing the wait command.  It was SO hard for her, but I was proud of her for restraining herself even for a few seconds when asked.  You can tell it's hard for her to practice impulse control, but she's so sweet and wants so badly to please that she tries her best.  Hopefully once she's officially up for adoption, the right person can take her and work with her.  I suspect with continued training she'll make a very lovely and smart dog for someone.  I even worked with Mr. Barksalot border collie who has been the bane of my existence the last few shifts, and just like most BCs he is incredibly intelligent and immediately ready to "work".  Of course he has no issues with simple stuff like sit/stand/down/wait, it's just going apeshit over other dogs.  He was more affectionate than I anticipated, and enjoyed being petted, so that buttered me up towards him just slightly.  ;)

Last night we went to see the Nutcracker, which was lovely and also signaled the end of our obligations for December.  He and I are both so relieved, even though I am disgustingly sick (seriously, every f'ing Christmas for the last 3 Christmases), I am so happy to be able to be home tonight RELAXING.  Everything is done, I have no where else to go or anything to do.  It's amazing.  We are definitely reevaluating things and making sure that 2016 won't be like 2015 was.  I mean it was fun/real, whatever, but we crammed way too much in and it shifted from being fun to being something to endure.  Not much point in that.

I can't believe Christmas is this week!  Are you guys prepared?  We're pretty much ready, I just have to go shopping this week for the smaller stuff I need, and then we pick up our prime rib on Wednesday!

Posted by Runs To Get Waisted at 8:59 AM