With all the Seattle stuff I didn't blog about some fun stuff that we had going on for the past few days, so I wanted to go back and recap!

Friday was such a great day!  I started out the day by finally getting to meet one of my Lovely Lady group members in person!  Jessica was in town for work reasons, and we somehow managed to finagle a breakfast together on her last day here in Portland.  It was surreal to finally meet one of the wonderful women I've been talking to for almost a year.  I usually am quite nervous with "new" people, but I felt instant comfort with Jessica and we immediately hugged and began having regular old conversations just like we do all day on Facebook! 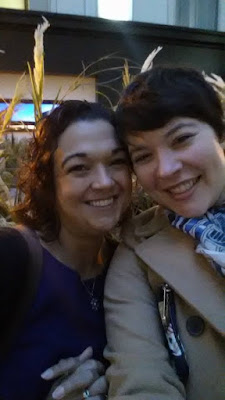 Jessica blogs over at A Little More Each Day, so you should go check her out and follow her!  She is such an inspirational runner and always gets it done!  I feel very blessed to have made these great, interesting friends this year.  Every day I find out more things about our group and the women in it that make me love them a little more.

After Jessica and I parted ways, I went back home and then came back out to Portland with Eric for the Holiday Ale Fest, which is an annual tradition for us.  And yes, we do take public transit and don't drive too and from.  Now admittedly, we've gone a bit insane in the past at Ale Fest, easy enough to do when you get multiple tastings of beer that are anywhere from 8% to 12% ABV!  This year though we were both really good.  We sat down with the program on Thursday and marked down the beers we wanted to try the most, and since some of our wants overlapped, we decided that one person could get Beer A and another get Beer B.  That way we both could try the other's beer to see if it was something we wanted a full taste of rather than wasting a ticket.  There were several times where I was like, "eh" and decided to use my ticket for something I liked better.  Another thing we did this year was dump beer we were not in love with rather than drink it anyway, and while it sounds wasteful, working in the wine industry helped me be a lot more at peace with dumping.  It really does save you from getting obliterated!

Between sharing tastes, dumping, making sure we ate and drank water, I felt buzzed but not insane by the time we left.  Trust me, it is definitely an improvement from years past.  I drank plenty of water when I got home and actually felt fine the next day, which is definitely a victory!  Before we left we stopped at the Oregon Lottery booth since they always do a free photo booth thing.  I loved the picture we took! 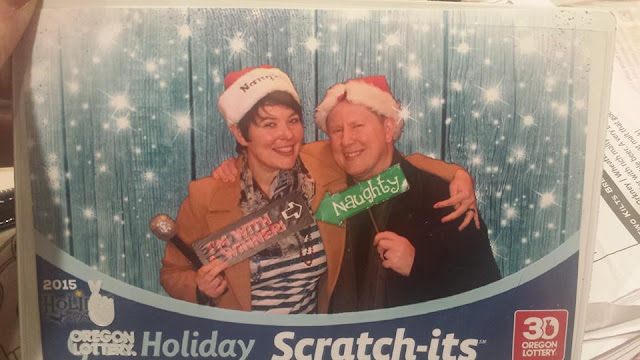 On Saturday I was supposed to get my level 2 certification for the shelter I volunteer at, but unfortunately there was some kind of miscommunication and the person who was supposed to mentor and test me didn't show up.  I was totally bummed, I love volunteering at the shelter and am happy to help in any way I can, but I am definitely ready to move up the ranks from laundry and dish duty.  I know that stuff is vital to keeping a shelter running, but I've spent enough weekends since August elbow deep in laundry soaked with cat piss and crusty food bowls, plus hosing dog poop out of kennels that I feel like I've paid my dues and am ready to move up!

As a level 2 I'd be able to get in the kennels with the dogs and work on basic training and socialization skills with them.  Definitely sounds like more fun than washing litter pans!

Since that was a bust, I came home and Eric and I spent a very pleasant afternoon listening to the jazz station and not talking at all.  He sat and browsed on the internet, and I started a recipe organization project.  I know all of that sounds boring, but with the craziness of the last few months it was nice to just sit quietly and do something simple.

Sunday morning was my shelter shift, which cue sad trombone because I thought I'd be playing with dogs in their kennels, but was back into laundry duty.  The dogs in the shelter this week were completely insane, and it was the first time I contemplated using the ear plugs they provide for everyone.  One of the higher level volunteers who walks the dogs came to me with a look on her face akin to PTSD, and asked if I could help her out by calming down the dogs when when was taking each dog out for a walk.  I felt bad for her, because the other dogs were barking so much and going crazy that they were scaring some of the shy dogs and making them not want to leave their kennels.  My job was to stand in front of the reactive dog's kennels and toss pieces of treats and kibble to them and get their focus on something else.  She and I made a pretty good team, and I was able to get some of the dogs to a calmer state with the exception of one dog, who was just an asshole no matter what you did.  I definitely felt rattled by the time I left the shelter.  Hopefully next week some of the dogs are in a better state of mind!

Afterwards Eric and I went to pick out our Christmas tree and get it decorated.  We got a beautiful 6 foot Nordmann Fir and had a really nice afternoon decorating and listening to Christmas music! 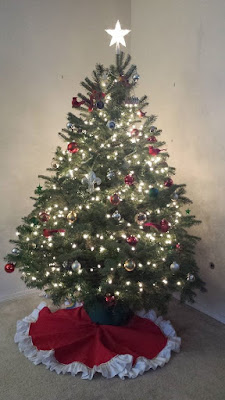 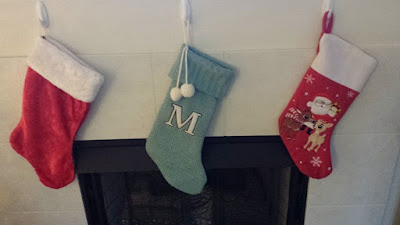 This week is going to be a bit busy with tons of Christmas parties!  I am definitely looking forward to the year slowing down!
Posted by Runs To Get Waisted at 7:18 PM