Y'all I have just not been myself lately.

My health, fitness and weight loss is always in the back of my mind.  I've done really well with things this year, but I have really faltered since August.  I have only gained about 5 pounds (I'm still under 200), but I'm not losing weight.  I feel horribly fat around my midsection.  I get in fits and starts of being on the right track, and then am usually derailed by the weekend, which I think is typical for most people.  But I'm tired of it.  I know what I need to do but for some reason cannot get back into the  mindset of putting 100% dedication back to my weight loss.  And I really don't know why, because it's not like I'm using some crazy diet that deprives me, moderate eating definitely works for me and isn't exactly rocket science.  Yet here I sit, feeling dumpy, gross and not great about myself.

It's no secret, the derailment happened when all the stuff with my dad went down in August.  Obviously no one would fault me for taking time to grieve and not having the energy to be all "woo, health and My Fitness Pal!"  The depression and worry I'm feeling over my injuries and the mixed feelings about dropping to the half haven't helped.  And again, I don't think anyone would fault me for being mopey for a little while, but now it's kind of gotten out of hand and gone on too long.  I'm all about feeling feelings and talking things out, not putting pressure on one's self but I don't know.  I just feel tired of using it as an excuse.  Part of it is that I don't feel good physically and don't feel cute anymore like I was feeling.  I am starting to feel the way that I used to feel, and I really don't like that.  I don't like my pants being tight, or having to wear certain shirts because my stomach looks poochy.  The ultimate this morning was reading about the World Series, and seeing that the guy who sent the game into extra innings is the Royals player whose dad just died.  I mean shit, this guy's dad DIED and here he is helping his team win the World Series.  No one would have faulted him probably for not playing, but he did anyway.  So what am I doing?

And I know it's not that simple and that depression isn't that logical, but at the same time, I've got to start sucking it up a little bit.  I don't want to be back where I was.

I am 100% that the thing that will get me back in my healthy mindset is my fitness, which is obviously an issue lately when it comes to running due to my stupid legg.  But I decided last night that I can't just be like "my leg hurts, so oh well, guess I won't work out" anymore or I am going to gain a billion pounds.  I'm one of those weirdos that when I'm super active, it completely suppresses my appetite, so I know if I get back into a rhythm like at the beginning of the year, it's going to help me.  Our work recently all gave us free memberships to Crunch Fitness, so I decided that I'm going to start braving that a couple times a week at least, and then doing shorter runs during the rest of the week.  I don't really like the gym, but I think going in and doing the elliptical or bike for 30-40 minutes will be good for me and will at least be something different.  I kind of poked around online looking for yoga studios near my work too, though memberships are so expensive, but I'm considering it.  I also whimsically decided to start up the plank and wall sit challenges from the 30 Day Fitness site, which I had kind of forgotten about but remembered in my memory lane musings last night of "what made me successful before".  And boy did I feel like a sissy when I did the plank challenge last night, a 20 second plank had me shaking like no one's business!  A mere 10 second wall sit has my legs sore today, so I think doing some weight based challenges will be good for my body and just for a change.

Running is still important to me and a huge part of my life, but it's hurting lately.  I truly hope that when I roll up to the start line in Seattle that I can make it for the full half.  I may not get the PR I'd been wanting, but at this point I'm letting it go.  I've had to let a lot of things go this year or I'll be insane.  But regardless, I'm hoping I can keep up enough fitness level to not cripple myself in Seattle.  After that is the Oregon Winter Half in January.  And after that will be Mary's retirement to 5ks races and easy 3-4 mile runs.

The rest of my weekend was much less angsty, though sadly Halloween was a bust.  Portland got a biblical amount of rain on Saturday night and we got a very minimal amount of trick or treaters.  I was SO disappointed, I was really looking forward to being the fairy godmother of the full sized candy bars.  We did load up the brave kids who showed up, though I was a bit taken aback that some of the smaller kids were kind of grabby and shitty this year.  Usually we get super polite and sweet kids, but there were some hellions at the door this time.  Oddly the teenagers were the most polite and excited about the full size candy bars.  Usually I'm annoyed that we get 16 year olds at the door, but the older I get it's like eh, I'm a kid at heart and enjoy a lot of things that adults aren't supposed to do (ie like when I go apeshit and get tunnel vision from the world at petting zoos).  I should cut the teenagers a break I guess.  At least they were polite.

Most of the evening was us doing the Jello shots that I made for the parents and watching horror movies (Nightmare on Elm Street and the Halloween remake).  Oh and of course torturing Molly with costumes.

Molly was SO bad on Halloween.  She was totally amped up because of the doorbell ringing, was mad that we wouldn't let her greet the kids (she's too strong and spazzy) and was just totally acting out.  She drank out of Eric's water glass TWICE, and then decided to help herself to a bowl of his tortilla chips when our backs were turned.  Such a turd!  She finally just passed out from exhaustion since she's used to sleeping all evening.

Some interactive toys that I bought her came in on Halloween so we did have fun showing her those and teaching her how to use them.  Molly isn't destructive but I feel like she needs stimulation and entertainment, so I got her a few toys to keep her busy and entertained lately.  This one pissed her off this most, it's called the "Trixie Mad Scientist".  You put food and treats in the tubes and the dog is supposed to use their nose or paw to flip the tubes over to make the food come out.  You can screw on different caps that have smaller holes to make it more challenging.  I had to work with her on and off for a day to help her figure it out.  This is when we first gave it to her, and I love her "What the shit IS this??" expression.  She's got it down pat though now and totally loves it! 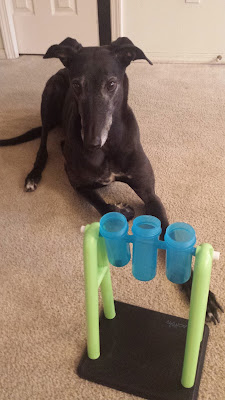 Posted by Runs To Get Waisted at 8:36 AM