Yesterday was my first training run as a half marathoner, just an easy little four miler after work.  I just changed here at the office and ran around our business park, which is convenient, but I much prefer my usual running spot.  It's just a lot quieter and I don't have to constantly be on guard for cars, but at least it was easy.  Well other than my Garmin deciding to be an ass... 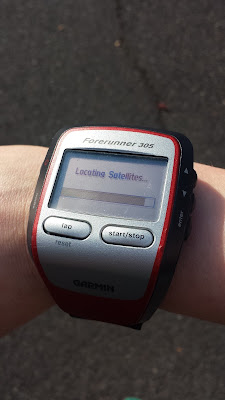 For the record, it was sunny and I was standing in an open area.  It took it like 5 minutes to find the satellites as I was standing there like a moron with my wrist held up in the air.

I feel like the summer is never going to end, and while yes I'm aware that it's fall, our weather has not gotten the memo.  It was SO warm out there, I would have put it at 75 degrees even though the weather said it was 67.  There's just no way it wasn't warmer than 67!  I could tell by my breathing that that humidity was high and my face felt like it was on fire.  On a physical front I am happy to report that my body felt good for the entire run, although my legs initially felt a little stiff, but loosened up after the first mile.  No adductor pain, no foot issues, it was just a good, basic run with no drama.  That's what we like right?

So there are a lot of Canadian geese around our office, which means a lot of Canadian goose shit on the sidewalk that I'm quite sure is caked in my running shoes.  I have thankfully never been attacked by a goose, but I am well aware that geese are mean, shady assholes so I try to give them a wide berth and respect so that I never have to check off "attacked by a goose" on my list of life events.  I was definitely getting the side eye from them yesterday, but they did leave me alone! 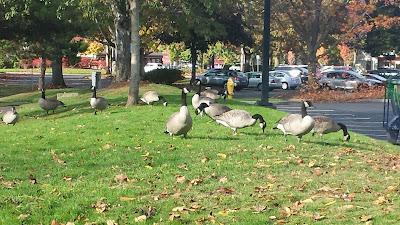 I finished in 50:28, and initially I thought that might have been a PR until I went and looked at some of my training logs and saw there were 4 milers I did that were a minute shorter.  Ah well, I still consider a sub hour to be pretty good!  It was the first time in a long time that I finished a run and felt so good physically and mentally.  I felt totally refreshed, relaxed and happy to get on with the evening.  The other positive part of running is that it completely suppresses my appetite, which sounds odd but it's totally true!  I ate my dinner (pulled pork, rice and salad) and was perfectly happy with it and full afterwards.  Since I had a lot of calories left over, I measured out a half cup of ice cream to enjoy while watching TV, and was satisfied after finishing that premeasured portion.  I already have all of my food logged today and budgeted for ice cream tonight too.  It's just a relief to feel stable and on track again, and like I'm doing things with purpose instead of feeling out of control. 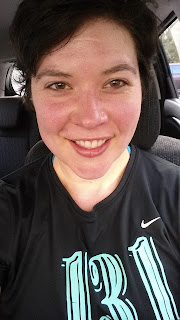 On a side note, we're all going to be going on a rough journey together, because I decided to grow my hair out.  I have incredibly thick, curly hair that doesn't want to curl until it gets to a certain length, so it's going to be painful for me to deal with and you guys to look at.  ;)  Saddle up folks!

Tonight I'm going to do my 7 miler, and I'm hoping that it won't be too hot, but I'll deal with it regardless.  It will be good to get it out of the way and leave the shorter runs for Friday and Saturday.

So I have a good (or gross depending on your view) story about Molly from Monday night.  We got home from work and my plan was in place:  make dinner, do some grocery shopping, rush back home in time for the new Star Wars trailer then purchase advanced tickets to see it.  Molly had other plans for us because she is a psycho.  She has very bizarre bathroom habits that I won't detail too much since I don't want to risk oversharing, but she has this really annoying habit of only wanting to poop in 2 spots in the yard.  She absolutely refuses to poop anywhere other than these two spots, which can be an issue since we have to make sure we clean up those two spots at least once if not twice a day so she doesn't step in her own mess.  One of the spots happens to be next to one of my huge rose bushes, so when she went out and did her thing Monday, we heard her scream.  Turns out, because she's an idiot and likes to stick her face behind the bush while she is doing her sinful business, the bush ripped her ear.

You never realize how much your dog likes to shake their head until they have an ear that's bleeding like a villain in a Tarantino film.  I really hope we never have a reason to have forensics investigate our house, because there was blood everywhere.  Every time Molly shook her head it would tear the wound open even more and start gushing blood.  We were cleaning up blood spots on the wall higher than I am tall, and I am 5 foot 8.  The gross part was that splatter got on the kitchen table and possibly our dinner that I'd spent an hour making.  After 7 clean ups, a panicked attempt to cover the couch and the realization that tonight was going to be a carpet steam cleaning night, I finally sacrificed my Sublime t-shirt to create a bandage for her that made her look like a little old gypsy woman. 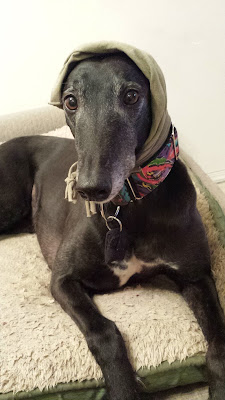 After cleaning up blood so many times, I finally had to leave the house before I lost it, and thankfully the grocery store I went to carried styptic powder for dogs so I was able to stop the bleeding finally at 3 hours later.  And don't feel too sorry for her, she had the nerve to beg for food and claw me until I petted her right after I got home!  The one bright spot of the night was that I walked in the door right before the Star Wars trailer played, so I didn't miss it!  And Eric went online early and the ticketing systems were open, so he was able to snag tickets for us for the 18th.  I am so excited!
Posted by Runs To Get Waisted at 9:25 AM