Yes, let's get that awkwardness out of the way, I was SUPPOSED to run the 10k race today, but I'm sorry to report that despite resting and coddling my leg I got the same pain as the other day, so I decided to cut my race at the 5k mark.  Sigh.  But you know what, I still had fun today and really enjoyed the race.  I gave Eric a reprieve from going to the race since the weather here was supposed to be really bad.  He's not felt well all week, so I didn't want him having to sit in the rain while I ran.

One of my long time friends reached out to me since she was running the race as well, and asked me if I wanted to carpool, so we decided to go together.  I have to brag on Erin a little bit here, she is the runner who I was supporting during the Rock and Roll Half.  She kept her training a secret except to a handful of us and worked very hard to run that half and was amazing!  She has continued running and working on her health and has lost 50 pounds!  I am so very proud of her, she's really been an inspiration.

I made Eric take a picture of me before I rushed out of the door, just to compare to myself last year.  As bad as I've been feeling about how I look lately, I definitely am happy with how nice my legs look, and I am obviously thinner than last year! 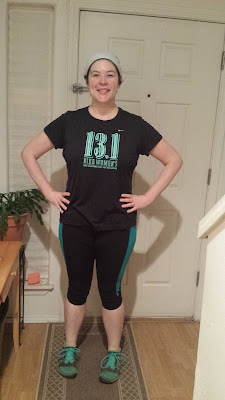 The weather here is supposed to be horrible and we were anticipating the worst.  The sky definitely was very ominous, and they were playing "Halloween" type sounds over the loud speakers (groans, screams, chains rattling).  It actually was pretty creepy! 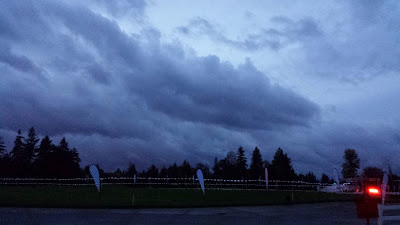 The race was at a golf course this year, but it was a different gold course than last year so we actually had asphalt paths to run on, thank GOD!  Last year running in the mud and having soaked feet the entire time wasn't very fun.  Erin and I just decided to run together and not stress about pace or any of that, and while I rarely like running with people or chit chatting while I run, it was really nice to be able to catch up with her.  Erin and I are both crazy busy all the time and have gone shameful amounts of time without seeing one another, so we basically used that time to talk about everything going on.  As with most fun run type races, it wasn't really that organized and it wasn't the type of race where you're going to PR, so we just focused on running along and having fun.

I started out feeling twingy in my leg, and right before mile 3 I had full blown sharp pain with it, and it was the same type of pain as the other day.  I'd already remarked to Erin that I wish I'd signed up for the 5k, so it was almost like my leg was all like "meeeeeee too girl!"  I decided to just cut things at 3 miles and leave it be.

The rain that the weather people swore was going to happen held off thankfully, so we finished dry as can be (other than sweat!).  The medals this year were really nice, although I really liked the Grimm Reaper ones we got last year.  Uberthons really does give out nice, high quality medals though, even for us lowly 5k people! 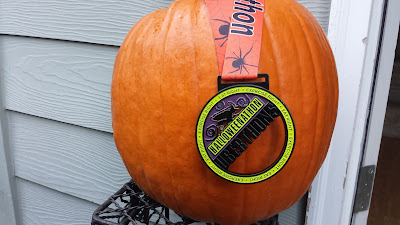 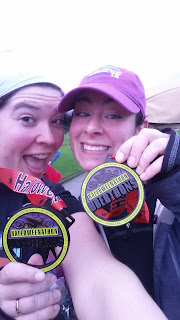 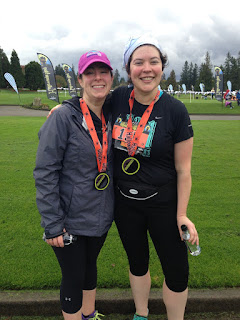 So the best part was right after the race when I was walking along flapping my gums to Erin, then I looked up and my aunt and uncle were standing in front of me!!  I caused a scene because I screamed and threw my arms around my aunt, I was so shocked to see her.  She had coordinated with Eric to surprise me at the finish line, and their timing was perfect.  They hadn't even had coffee yet but still came out to see me, now that is real love people!!  We stood and chatted for a bit then all went our separate ways.

I hope everyone has a safe and fun Halloween tonight!  We are handing out candy tonight as we always do, and this year we decided to take it up a notch and get full sized candy bars, along with stickers for the little kids.  I also made Jell-O shots to hand to parents if they want them.  We're going to be THE house this year!  ;) 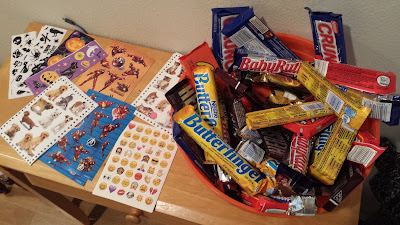 Posted by Runs To Get Waisted at 1:33 PM