Good run, bad run is not the name of a newly discovered Dr. Seuss book.  Oh no folks, it describes this week.

On Monday I had the most amazing, ego boosting run.  I posted a blip about it on Facebook, but basically I did a 3 miler at the library (I needed a change of scenery).  There were several noteworthy things about the run, one of the most important things being I wore LONG SLEEVES!!  You have no idea how excited I was about that, I love that feeling of needing to put on long sleeves, feeling cold at the start of the run and perfectly warm when you're done.  The change of scenery was nice too, I basically run in the same spot every time, and while it's perfect from a safety and convenience standpoint, I am so bored with it.  The library park has tons of ponds, cute ducks, geese and other wildlife so it is a very peaceful place to run. 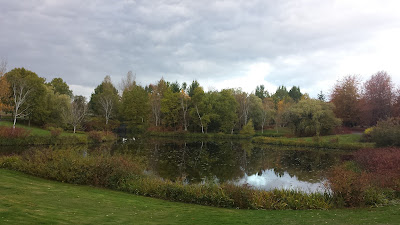 So the entire run I felt like my heart was about to explode, and there were a few times I had to stop my watch just to catch my breath for 10 seconds at a time.  I was kind of "WTF" about it at first, but then suddenly realized that maybe it was because I was running faster so my heart was working harder.  For the rest of the run, I was pretty eager to get home and plug my Garmin in to see the stats and see what my pace was, which is a rare occurrence for me!  Sure enough, my eyes just about bugged out of my head when I saw that I was running sub-10 minute miles during my running intervals, and my overall average pace was 11:40.  (Total time was 34:58) I was so excited that you guys would have thought that I qualified for the Olympics!  I have never in my life run at that pace consistently so it truly was an achievement for me.  Not only that, but my body felt fantastic afterwards, even my foot.  Life is great right? 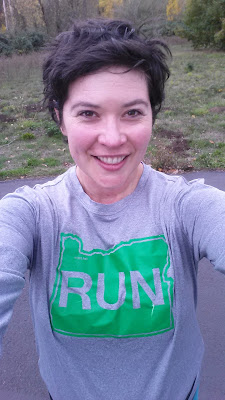 Side note:  I'm already caving about my hair....I don't think I can handle the grow out.  I don't mind it being short, it was just that I kind of miss it being long, but I don't miss it enough to where I'm willing to put up with looking like Don King all the time.

So last night I set out to do the 8 mile run on my schedule, and was very confident that based on Monday that I'd do great.  I figured my legs might be a little tired, but no matter, I'd just go slower.  My legs did indeed feel a bit tired, but nothing I wasn't used to really.  At first things were fine and there was really nothing noteworthy.  Then suddenly at mile 3, I got a burning pain right above my inner ankle on my right leg (always my effing right leg).  At first I thought it was a muscle thing so I stopped to rub it a little, and it was painfully sore to the touch.  I kept going and of course, the burning and pain started getting worse.  It felt exactly like the tendonitis that I got during the Portland Marathon, and I knew that it wasn't going to get any better if I kept going, so with many expletives and a painful walk back to the car I cut things at mile 4.  It burned and felt painful all last night, and still feels painful today.

I just give up at this point.  I know this sounds dramatic and crazy but I literally feel betrayed by my body.  Between my GI issues and all the crap with my feet and legs, I am just astounded at how much my body has just gone rogue this year.  I just feel like I get one thing resolved and something else goes wrong.  First it was my foot, then it was the adductor and now it's whatever asshole tendon this is.  Oh and let's not forget the major back issues in January.  I'm just flummoxed because I've never had injuries like this just constantly plague me.  I have literally changed nothing.  Same clothes, shoes, running spots, routine... nothing has changed.

Yes, I could bike, swim, crosstrain, go to PT and all this, that and the other.  (I bring it up because I know it's coming).  I just think back to 2010 when I hurt my foot and spent almost a thousand dollars by the time it was all said and done trying to diagnose and treat my foot, and NONE of it helped.  It finally came down to switching to minimalist shoes and that was the end of it.  I just truly believe based on my past that none of that stuff is really going to make a difference, especially because the little mini-injuries I get last a few days, goes away, then something else gets hurt, so what exactly am I treating at this point?  All I can do at this point is ice yet the newest bullshit injury, rest for the next couple of days and keep going.  Once this half marathon is done, I don't know...I do have that half in January and after that I may have to keep my running distance to 3-4 miles.  Doing halves is fun, getting the medals is fun, but this training season has soured me on long distances for life.  If I'm able to do the half in January, that will be a marathon and 4 half marathons under my belt.  I really don't feel like that's anything to be ashamed of were I to "retire" from long distance running.

Hilariously, and I was just talking with Eric about this, but this week was supposed to be my last full training week before tapering for the marathon.  My long run this week was supposed to be 20 miles.  All I can say is, thank every deity that exists that I had the common sense to drop to the half marathon next month because can you even IMAGINE?  I can't even make it 8 freaking miles apparently, much less 20.

The one positive thing is that when I plugged my Garmin in last night, all of my running intervals showed that I ran sub 12's on 2 of the miles and a sub 11 on the third mile.  I am getting faster and better, it's just so frustrating that my legs are not cooperating with the journey!

I am going to rest my leg for the rest of the week so that I can be completely fresh for my 10k on Saturday.  It's supposed to storm, so I actually told Eric that he doesn't have to come since it's going to be a bit of a shit show.  He's literally been to every race I've done (even the San Francisco half!) except one, so he's paid his dues at this point!