Catch Up and Food Challenges

I feel like I've been falling behind on the blogging job lately!  I really miss blogging every day, especially since we've had a lot of cool stuff going on lately that I want to tell you guys about, but the only time I have to write really is at work and I figure that they might frown upon that.  ;)  But I figured I'd take a minute and catch you guys up.

Yes, my wonderful husband's birthday was last week and I didn't even mention it.  Shame on me, although Eric is so modest and likes to be so under the radar that he is fine without me mentioning it.  I did "out" him on Facebook since he's one of those people who doesn't put their birthdays up, so he did get a nice flood of messages from that.  We did the majority of the celebrating the day before, I took him out to a really nice dinner at this place called the Veritable Quandary, which I highly recommend if you are ever in Portland.  It is somewhat fancy pants, but stops at being full on snooty.  The vibe in there is elegant but while being warm and laid back, if that makes any sense.  We had a really nice meal complete with chocolate souffles that you have to order 40 minutes in advance, but are worth every bite! 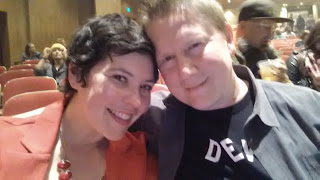 Afterwards we went to see My Morning Jacket in concert, which was really awesome.  If you are not familiar with them, they are kind of this psychedelic rock band that I can best describe as Lynard Skynard meets the Pet Sounds/Smile era of the Beach Boys.  The lead singer Jim James looks like a crazy logger man/Muppet person yet somehow has this beautiful falsetto voice.  I posted a clip below of my favorite MMJ song (warning:  super long!) if you are interested in their sound.

Awhile back one of Eric's friends emailed us and asked if he could crash at our house since he was running the Portland marathon, and of course we said yes, so he arrived here on Saturday and left on Sunday afternoon.  When I married Eric, I was fortunate enough to get a huge network of cool, interesting friends along with him.  So many women seem to hate their husband's friends, but I am lucky enough to say that I love each and every one of his!  I had never actually met Kevin in person, though I have met his brother several times and we get along well, and I was especially excited to meet him because he is a runner.  But not a normal runner, like a crazy runner, and I mean that in the most affectionate way possible.  Kevin runs about a marathon a week, and I am not exaggerating in any way, he literally runs a marathon a week, sometimes two.  In fact he ran a marathon on Saturday, drove from Washington to our house, then ran the Portland marathon the next day.  I know, the fascia in my feet and everywhere else in my body shriveled up just thinking about the implications of that.  When we went to dinner on Saturday night I asked him how many marathons he's done, and it's in the 240 number.  He's done 42 or 43 just this year.  I literally don't know how he does it, I can barely train for this one without it being a huge production that may or may not end with me being crippled.

The flip side of this is that Kevin has traveled all over the world to do these marathons, and listening to his stories is really fascinating.  He did a marathon in Jordan recently and the Australian Outback right before that.  He's doing some stateside marathons the rest of the year (he has 2 marathons next weekend), and I can't remember if it's this year or next year, but he's doing the Antarctica Marathon.  I mean how utterly cool is that?  (no, literally, how cool...my bits and pieces are frozen just thinking about it).

Anyway it was fun to host him and I was like a worried mother hen making sure he had everything he needed to have a successful run, although I think he could endure just about anything at this point.  I prepared a brunch feast for when he got back:  sausage strata, hash browns, hot cinnamon bourbon apples and bacon.  And of course mimosas, because brunch without mimosas ain't brunch.  We all had a good time, though I am a little steamed because his medal was SO beautiful.  I am still bitter about that godawful medal I have from Portland that looks like I'm about to ride into the Crusades with King Richard.  Ah well.  Hopefully the one for Seattle is cool.

Being that this is a blog theoretically about being healthy, I have been completely neglectful in not posting about the nutrition challenge that my ladies group and I are doing for the month of October.  Each of us participating in the challenge set our own intentions for the month, because I feel like  while there are obvious healthy guidelines we should all follow, each person is different and has completely different needs and things to work on.  I challenged myself to log my food accurately every day, to eat fresh fruits or vegetables with every meal, limit myself to two alcoholic drinks a week and drink 80-100 ounces of water every day.  It's gone okay so far, I haven't been 100% but am definitely doing better than I was the past month.  I feel like I'm gradually crawling out of the hole I've been hiding in and slipping back into better habits.  Water is and always will be very difficult for me, not because I dislike it but because I get distracted and forget to drink any!  I've mainly been rocking hot tea in the mornings, which I am definitely counting.  Our other challenges, the Lovely Ladies Miles and the Star Wars activity streak are going well for me too.  It is astounding, but I have managed to be active every single day and not break my streak!  A lot of that is because I go with Eric and another coworker for 2 miles of walking every day, so that definitely gets me up and moving!

If you've read me for any amount of time, you know that Eric and I are both obsessed with all things Rock and Roll Hall of Fame.  We try to attend the induction ceremonies when we can and then for the rest of the year we speculate who is getting in next.  It gets like Def Con 10 levels of nerd in our house about it, and I think most of our friends usually regret making an innocent comment or asking an innocent question about the Rock Hall due to the fact that we'll go on for an hour about it.  Anyways, they are releasing the nominees on Thursday, which is always a big deal for us.  This year is a toss up as to who is getting in since there is no obvious front runner in the list of newly eligible artists.  Eric has a great music blog and wrote a nice piece on people he speculates may be nominated, if you care to read it.  Anyway, I will likely write a post with my two cents once the nominees are announced, which I'm sure you can't wait for!  ;)

So October 1st was National Black Dog Day, and as everyone knows, I've got a very diva like, pain in my neck black greyhound named Molly.  Black Dog (and cat!) Syndrome is definitely a thing, and the greyhound adoption agency actually asked us if we would have an issue adopting a black dog.  When I expressed the socially polite sentiment of "WTF", the coordinator told me they have tons of people tell them that they specifically do not want a black greyhound.  Idiots, like seriously don't even adopt an animal if you are that anal about the color.  Anyway, often when I am out walking Molly, people see a big black dog and immediately cross the street.  Sometimes this is handy when the person happens to be a creeper, but it also makes me sad because it makes absolutely no sense to me.  Molly is the 6th black dog I've ever owned, they've all been awesome and while I don't care either way, I think her black fur is so pretty!  She gleams in the sun, plus she kind of looks like Toothless from How To Train Your Dragon, what isn't to like?

So I was going to take a cute selfie of Molly and I to post to social media with a heartfelt message about how black dogs are awesome, go adopt one, don't be some oddly racist person towards dogs, etc.  Except the problem is that as much as I think Molly is a diva, she thinks I'm a lame jackass when I try to take pictures of her.  I'm not kidding, the dog is so anti-photo that getting her to take one with me where she doesn't look like she's one of those sad, abused dogs from the "Arms of the Angel" ASPCA commercials is like an act of Congress. 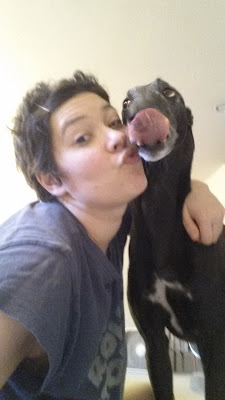 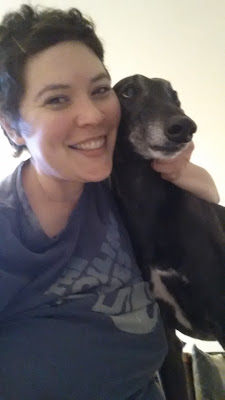 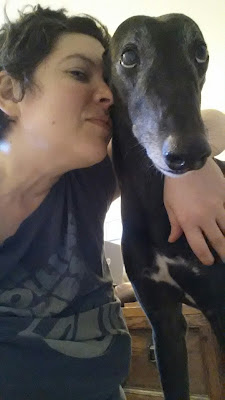 Posted by Runs To Get Waisted at 6:53 PM