All Aboard the Ouch Train to Cramp Town!

Sigh.  I had so planned on triumphantly writing about my 7 mile run today, but alas, my legs had other plans.  I set out yesterday and was only able to make it 4 miles due to leg cramps that started up early into the run and simply wouldn't go away.  Not adductor pain, just run of the mill calf cramps that clearly are going to be relentless.  I was mainly frustrated because I really was conscious yesterday of making sure that I got plenty of fluids all day, and even drank down a big coconut water.  I was pissy that I spent the calories on it and it didn't even help!

So this week I had two 4 milers, a 3 miler and a 7 miler on the schedule, so now I have to figure out when to do the 3 miler and when to do the 7.  I really want to get the 7 miler done tomorrow so that I'm not rushing Saturday, so I may ask my boss if I can come in early so that I can take a long lunch and do my run.  He likely won't care, which is why he's awesome.  The only reason I'm crunched for time is that Eric's friend Lee is in starting today, so we're going to be out and about, so I'm trying to squeeze my runs in when I can so that I'm not left out of the fun!  I will keep you guys posted, and hopefully I will have a 7 miler update for you guys tomorrow!

I have had issues with leg cramps ever since I've been running, and it really doesn't matter what distance it is.  Sometimes I can do a 12 mile run like it ain't no thang, but a 3 miler will feel like the world is hitting my calves with a mallet.  It is something I need to find a solution for, especially since I don't want to be taken down during a race.  I spent some time online this morning seeing what I could take that was somewhat natural, and that wasn't bananas since I hate bananas.  Many sites say that tomato juice works wonders for cramping, so I got a few cans at lunchtime today.  I swear I am turning into an old lady, because I actually LOVED the taste of it.  I remember having some when I was a kid and it was gross, but this was super tasty.  (Next thing you know I'll be drinking prune juice or something, which considering my issues...) I stashed some cans in my desk at work and am bringing home some cans, that way I'll be able to have access to it wherever I am.  I'm hoping if I have it 3 times a week or so, that will improve the cramping. 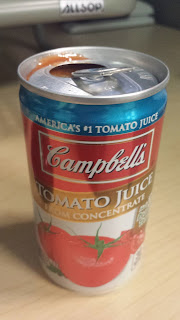 I also read oddly enough that yellow mustard can help leg cramps and that a lot of athletes use it mid-performance.  People don't know if it's the vinegar or the tumeric that help, but so many people were swearing by it that it's worth a shot.  I may or may not have jacked some mustard packets out of the work kitchen, so the next time I go for a run I'm going to stash a packet in my running pouch to see if it helps the next time.

And this isn't related to cramping in the least, but when I was shopping for the tomato juice, I found this tea I loved that I had kind of forgotten about.  I had never seen it in a store before, so I just about peed myself when I saw it. 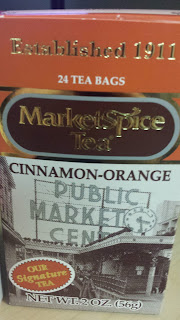 Long ago at other hellhole job, Eric was off on a business trip in Seattle and I was at home nursing the plague.  He would always get me little presents when he was off on trips, and on that particular one came home with this tea.  Y'all.  If you are tea people, hop online and order this one, it is absolutely gorgeous.  It is somehow naturally sweet, super cinnamon-y and really orangey.  When you make it, it makes the whole room smell like cinnamon and oranges.  I just remember being so sick, having a sore throat and being so grateful for this tea that I literally went through a box in like 3 days.  We ordered it a few more times online then I kind of forgot about it.  I grabbed this box and wish I'd grabbed more, it's so heavenly!

On the random recipe front, I wanted to share a sandwich that I made last night, a beet melt: 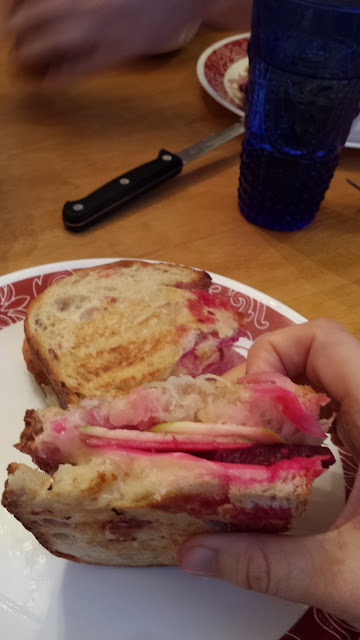 So I know this won't be for everyone, because beets are one of those things people either love or want to set fire to.  I happen to love them even though the first time you go to the bathroom after eating beets, it trolls you into thinking you have some horrible cancer until you remember, "Oh yeah, beets".  We'll just leave it at that.

There is a brewery in Portland called Ecliptic Brewing, and while their beer is decent, I think the food is where it's at.  They have a beet melt sandwich on the menu that Eric was swearing by, and even though I was skeptical I tried it and was instantly in love!  It's basically roasted beets, thinly sliced apple, cheese and picked onions.  I decided to create it at home with a couple of swaps.  I used Swiss cheese (Ecliptic uses goat or cheddar), and sauerkraut instead of pickled onions.  I loved having the kraut instead of the onions, but I would definitely use a different kind of cheese next time.  The Swiss was just too mild, you really do need something with some tang to it to offset the earthiness of the beet and sweetness of the apple.  I think a smoked cheddar would be really nice in this.  Anyway, if you like that kind of thing, give it a whirl!