So Long Summer, Challenges and Tetrazzini

I've been meaning to post another recipe review of a casserole I did last week, and just keep getting delayed!  Eric and I have a little inside joke about Chicken Tetrazzini because of this Maury clip that we saw on The Soup many years ago.  We constantly quote it, so much hay was made when I actually made Chicken Tetrazzini.


Anyways, last week I made the Chicken Tetrazzini casserole from Cooking Light and it was AMAZING.  After the disappointment of the Chicken Spaghetti, this was exactly what I am looking for in a casserole.  Creamy, comforting, stick to your ribs and plenty of leftovers.  I made the casserole exactly as is, (except I used cooking sherry and omitted the salt since the sherry is salted) and it came out perfect.  I did use spaghetti since I think basically it's the same thing as vermicelli.  The one thing I would do the next time is add a couple cups of frozen peas before baking and add some extra mushrooms, just because those are things I like.  If you are interested in the recipe, here you go.

Yesterday we said farewell to summer, except my version of farewell is more like "Bye bitch!"  Truly it was the worst summer that I have experienced since moving to Oregon, and I am glad to be done with it.  Things are definitely cooling down, and *gasp* we actually had a lap blanket on last night when sitting on the couch!  I am so relieved.  The week has been pretty terrible, so last night I insisted we go for a "family walk".  Poor Molly doesn't get any long walks in the nice neighborhood since I started working again, she has to make do with a short 15 minute one in the mornings while I'm on "hopefully there's not a crackhead in the bushes" alert, so I thought it would be nice for her to get a proper walk.  And you know, nice for us to get a proper walk too! 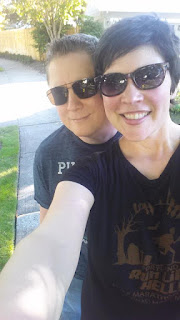 It was a perfect evening, the sun was shining but there was a soft breeze and it was about 70 degrees.  Not that many people were out walking, so it was very quiet and relaxing.  It's the first time I've felt somewhat normal in awhile.  We had a nice conversation, Molly took like 900 dumps then proceeded to look miserable because we were walking her longer than 20 minutes.  We made her walk 1.57 miles, which in her little pecan sized brain that equates to an ultra marathon. 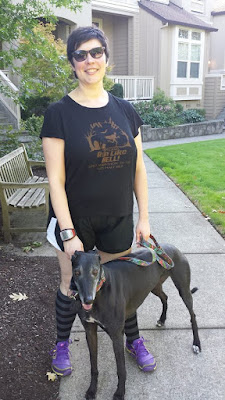 I have neglected to mention this, but my ladies group has been having a mileage challenge for the past couple of months.  We were striving to hit 1000 miles (biking, running, walking etc) as a group by the end of September, and we are already over 1000!  This morning we decided to keep the challenge going and try for 2000 miles by the end of October.  My ladies are such bad asses that I have no doubt we will hit our goal!  I don't know why, but the challenge has really motivated to move at least a little bit every day.  It's sort of like, I don't want to look lame plus I want to do my part for the group and not let them down, so at a minimum I've been getting in my two miles of walking every day at work.  It's been really nice.  We are also doing a concurrent challenge that's Star Wars related, and the goal is to have at least 30 minutes of activity per day until the premiere of Star Wars:  The Force Awakens.  (We're sexy, active nerds).  If we don't break the streak, that will be 100 days of activity.  I'm proud to say that I am going strong on whatever day this now is lol.  Day 80 something?

So those are positive challenges, but I am still dealing with my personal challenges which are not very positive at all.  I feel slightly more comfortable about elaborating what is going on just so you guys aren't like "what is this bitch going on about with her vague shit".  In a nutshell, there has been a crisis going on in my family due to some recent revelations about a family member, and it has been very painful and shocking.  My day to day is filled with frantic phone calls and emails from family members and all of us trying to find a way to cope with our shock and grief.  To say this has been the worst month in my 35 years of living is not an understatement.  This week things have kind of come to a head, and I had to make the unfortunate decision to cease contact with this close family member who has caused the upheaval.  This is not a decision that was made lightly, or without extreme pain, tears and immense grief.  It feels unnatural and shitty, it literally feels like I am dealing with the death of this person, but unfortunately it's the only choice that made sense due to the circumstances.  That's honestly all I can share about it without writing the prose version of the most white trash episode of the Jerry Springer Show in existence.  I hope that makes things more clear and helps you guys somewhat understand what I've been dealing with.  It has been so difficult to eat healthy and exercise simply because I'm grieving, and because this situation is on my mind from the minute I wake up until the minute I lay down at night.  Does anyone remember what it was like for the week after 9/11, or when someone dies, and you are numb, doing your best to keep moving and you eventually have a moment where you catch yourself laughing or having fun, and then you feel immense guilt?  That's what this has been like.

But, now that I've made my final decision, I have to attempt to move on with the new normal. and that includes maintaining my health and continuing to progress with my weight loss and running.  It's really all I can do at this point.  It's really not easy, and I feel so unlike myself simply because my reality as I knew it doesn't exist any longer, and I'm literally trying to redefine my existence.  All I can do is try my best.