I didn't post about this on my last post, but over the weekend I made a ton of casseroles and soup bases to stock my freezer from recipes I found on Cooking Light's website, so I thought that as I ate them that I'd review the recipes.  I didn't take pictures because 1) I forgot and 2) none of the dishes exactly looked appetizing so you're not missing much.  Casseroles generally look gross and taste awesome.  Anyway, I'm trying to find my stride again with posting and life in general, so thanks for bearing with me on the disjointed posts and lack of fun pictures.

Before we get started on the recipe reviews, I did want to give a couple of tips for making soups/casseroles in bulk.  Actually, it's just tips for life man.

1).  Cut up your vegetables with a food processor.  Seriously, if you don't have a food processor, don't even finish reading this.  Get your shoes on, go to the store and buy a food processor.  They're like $20.  It will change your life.  So many people in the reviews for these recipes were bitching about how much time it took to chop up vegetables, and it honestly doesn't need to be that way.  I use a processor to chop onions, celery, carrots, bell pepper and mushrooms, then store them each in their own tupperware.  It takes seconds to chop an onion into tiny pieces, plus I don't feel like I got tear gassed in a Vietnam protest.  You just throw the shit in there, hit pulse a few times until it's chopped however finely you want, and then BOOM.  Done.  It makes food prep 100 times easier and more pleasurable, plus when you are making things in bulk it is so FAST.  Chopping all of the above ingredients took me maybe 15 minutes since I chopped each separately and rinsed the base in between.  Even if you're not cooking in bulk, you could do it as a tactic to have already prepped ingredients for cooking throughout the week.

2)  Use a Kitchen Aid mixer to shred chicken.  When the beautiful Anna told me about this tip awhile back I kind of scrunched my face and was like "nah brah."  There's no way that would ever work in a million years.  It's anarchy.  But when I was faced with making 2 separate casseroles that required shredded chicken, I decided to give it a whirl.  Holy shit y'all....I had a moment like I had when I figured out you could bake a ton of sweet potatoes in the crockpot at once.  It looked something like this: 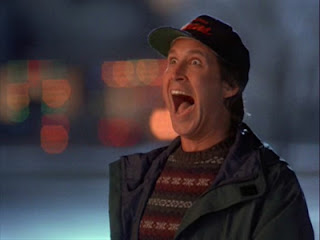 I have never in my life been able to get chicken to shred so nicely as I did with this method.  It's exactly as it sounds, just put your cooked chicken in the Kitchen Aid with the paddle attachment, turn it on and watch it work.  I had plenty of shredded chicken for my casseroles, plus some left over to make a really nice tarragon chicken salad.  Between the food processor tip and this tip, prepping to make all of this stuff was so much easier and faster.

Now that we've gotten that out of the way, on to the reviews!

So if you are from the South, you likely know about the glorious casserole that is chicken spaghetti.  It's a staple of potlucks and Dinner on the Ground at church, and it's honestly something no human should eat since it contains an ungodly amount of Velveeta.  I am all about fresh ingredients, free range this, organic that...but put a pan of chicken spaghetti in front of me (ie Velveeta, shredded chicken, spaghetti, Rotel tomatoes and canned soup), and it's on like Donkey Kong.  Love the stuff, but it's definitely not something that enters my mind to make since it is so unhealthy, so I was pretty excited to see that Cooking Light had a "healthy" version of chicken spaghetti.  Here is the recipe, if you are so inclined.

The verdict?  From a taste standpoint I really liked it, from a looks/function standpoint it was a bit of a disaster.  Mine ended up more like a stew and did not hold together at all.  Anna from Losing My Puppy also made it, and had a total different experience but she also used ziti instead of spaghetti so after comparing notes, we suspected that maybe her pasta soaked up more of the liquid.  Again the taste was pretty good so it wasn't a loss, I was just aggravated at having to basically ladle it out of the casserole dish.  It's a good base recipe that I would make again, but definitely with modifications.  For one, I would sautee the veggies a bit since they stayed crunchy despite being in tiny pieces.  I didn't mind so much, but the hubby did.  I would also either totally omit the broth or just put a splash into the soup to thin it out just a titch.

Lentil Soup with Ham and Greens

Lentils are something I actually like but rarely eat for some reason.  I don't really know why.  They taste pretty good, they cook quickly and are good for you.  I will say that I don't care for the red ones which seem to turn into mush within seconds, but am a huge fan of green French lentils and a secondary fan of the brown ones that stay fairly firm but do have some nice give to them.  I had some lentils in my pantry that I've been meaning to use up, so I pulled a few lentil soup recipes to try and this was one of them.

The verdict?  I really liked this one guys.  It was very easy and very flavorful, packed with veggies and the ham gave it a nice depth.  I used regular old ham like you get for sandwiches at the deli, plus frozen spinach.  Otherwise I made it as is and loved it, so if you'd like the recipe, here you go.

We have an insanely busy couple of weeks coming up, which I don't know whether that's a positive thing or not.  I really could use some down time, but on the other hand all of this stuff is fun stuff, so maybe it will be a nice break and distraction from what we've been dealing with.  Tonight Eric and I are going to see Def Leppard/Tesla/Styx, which is going to be really fun.  This is actually my third time to see Def Leppard and they always put on a great show and sound fantastic.  I am eager to see Tesla, and they should also be fun.  Styx I could honestly give a rat's ass about, plus "Come Sail Away" makes me want to drive a screwdriver into my brain, but they are part of the package deal.  We've gotten so many giggles and eye rolls over the fact we're going to see Def Leppard, but guess who has two thumbs and does not give a damn?  ;)

To close, my running has not been great this week, in fact it's been non-existent.  I'm going to do my long run Saturday, and then really try to sit down and figure out how to get back into my schedule and get back into a groove.  Some of it is my foot, which is still in pain, but most of my lack of motivation is all the stuff going on behind the scenes.  I know it sounds like excuses, but I promise if you guys knew more then you'd understand where I'm coming from.  At some point hopefully I can share more details, I just can't right now.  It's just been a very difficult month, there is so much uncertainty in my future and I'm really having to fight to find that motivation and energy.  I'm not going to stop fighting though, and honestly can't since I'm obligated from both a monetary standpoint and heart standpoint to Seattle.  Anyways, I will keep you guys posted!

Posted by Runs To Get Waisted at 9:25 AM