I'm trying to "normalize" so I thought I'd just do a little post about the weekend, and warning, there are so many selfies ahead!  ;)

On Saturday I was supposed to do my volunteer shift at the animal shelter, but with all the stuff going on in my life I needed a break.  You know when bad shit is going down, and you just try to keep super busy in order to not have to stop and think?  Well, that's exactly what I was doing all of last week, so when Saturday morning hit I suddenly was like, I can't do this today, I have to physically stop.  So I called the shelter tech line and postponed my volunteer hours to another day.  I also emailed my volunteer coordinator to see if I could switch my days from Saturday to Sunday, since I think that would work much better for my running schedule.  Now I can do my long run days on Saturdays, and Sundays can be for the shelter dogs and football.  ;)  You know, the important stuff.  Seriously, I remember that being a huge thing that depressed me during my last training, was not being able to watch football since it took me so long to do my long runs!

Speaking of football, we had our family league draft on Saturday evening.  My aunt and uncle came over and we set up a second laptop with video Skype for my brother and SIL to be in the room with us so to speak.  It was a lot of fun and we definitely all needed some of that!  There was drama when Eric drafted Drew Brees out from under my aunt, when I (fueled by beer) screamed outside at someone who would NOT shut their dog up and when a storm hit my brother's house and it sounded like a bomb went off when lightning struck near their house.  I do NOT miss those storms in Louisiana!


On Sunday we went to Portland to see a documentary on Marlon Brando called "Listen To Me Marlon".  It was very fascinating so if you are a Brando fan I would highly recommend it.  Brando made hundreds of private tapes where he was just speaking to himself, so the whole documentary is just his voice, talking about his life.  No one else is interviewed, so it is incredibly unique on that front.  And good God, I forgot how sexy Marlon was when he was young.  I grew up in the chunky Brando era, so it was easy to forget young Brando's hotness.  Oh man alive...there was so much footage that made this middle aged lass' heart skip several beats.

I also decided to be an annoying millennial and take a selfie with the movie poster.  Eric cracked up at it and was like, you actually managed to even have the piece of hair dangling down in the same spot.  For the record I didn't plan that, it just kind of happened because I am awesome. 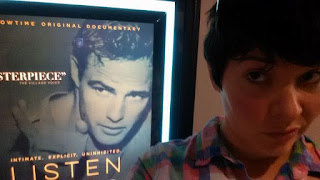 I also forgot to mention this, but a couple of weeks ago we went to see that "End of the Tour" movie with Jason Segal.  It was EXCELLENT and JS was surprisingly great as a serious actor.  We are already gearing up and plotting out our Oscar movie run, and we suspect possibly that might be one of them, but it's too early to tell.

Yesterday I attempted to go for a 5 mile run and wasn't very successful.  I made it the full 5 miles but only ran 2.5 of it.  We are getting hit with another heatwave, and of course it started yesterday which was a lot of my issue.  I was also just very emotional and struggling with things.  Sometimes running will do the chemical thing where it practically makes you high, and it puts you in the best mood ever.  And then sometimes when you've been compartmentalizing feelings, it's the thing that strips you raw and brings everything into the open, which is what happened to me yesterday.  I was a mess, so I finally gave myself permission to walk as long as I did the 5 mile distance.  I didn't feel good about it really when I was finished, but at the very least I'm not curled up in the house.  I figure that I'll fake it till I make it when it comes to my running mojo/schedule.  I know things will get back to a somewhat normal point, it's just going to take me a bit.

And finally, I swore mentally up and down that I was going to be an adult and not get any Star Wars gear.  I'm 35 and super mature, and there is no sense in going to the boys department and getting a shirt...oh screw it.... 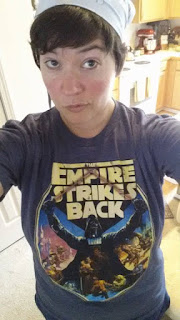 For the record, I got socks too.
Posted by Runs To Get Waisted at 2:43 PM