Lots to update you guys on, so let's get right to it!

Obviously this was the highlight of the weekend, and I cannot tell you guys how much I needed this run.  I needed it mentally and physically, so achieving it was a huge deal for me.  I have been so depressed lately and the combination of not running/running in pain has just added to the depression.  I was genuinely beginning to freak out that I have not completed a double digit run in my training program yet, so yesterday was basically a situation where it had to happen.  I have also not had a lot to feel good about lately, so I needed an accomplishment and needed to feel like I was actually moving forward if that makes any sense.

The weather continues to suck, although it was cooler the humidity was 96%.  I mean....all I can say is that I can't wait for fall to get here.

The beginning of the run was great and I actually had plenty of energy and felt like I was going pretty fast.  I brought a baggie of Shot Bloks with me instead of leaving them in the car like I usually do, and I really felt like that made a difference.  Every once in awhile I'd just pop one in my mouth and let it dissolve instead of chewing it, which not only seemed to give me pretty consistent energy, but also kept my mouth from being so dry!  My foot didn't really start giving me grief until mile 8, which seemed to be about the time it gave me grief last week.  I was so proud of myself, I was able to push myself consistently do my run/walk intervals until the last mile and a half, then had to walk the rest of the mileage since my legs just had nothing left.  I remember my last training, I walked SO much and it would take me so long to do my mileage, so to only walk a mile and a half (not including the walk intervals of course) makes me so proud!

One of my favorite things on runs is that sometimes animal friends will come out and tell me hello, which always brightens my day and cheers me up when things are tough.  Yesterday I had to stop to pet and admire this very sweet kitty who sauntered into my path and also thought my running shoes made a pretty awesome spot to rub all over. 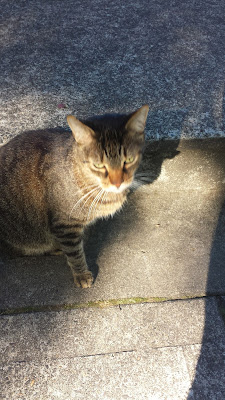 I also took a selfie to send to my ladies group mid-run, with a special request to slap me if I ever signed up for a marathon ever again.  I know they'd never slap me, but they should.  ;) 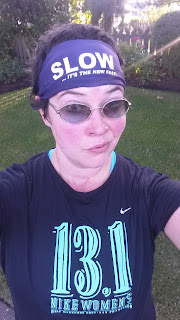 I finished up in 2 hours and 37 minutes with an average pace of 14:19.  I am actually really pleased with that, I feel like if I continue managing my pain and strengthening my legs then I will slowly improve.  Maybe I'll actually finish this marathon faster than 7 hours.  ;)  My foot did hurt post run, but it's actually not has severe as it has been.  I think switching back to my old shoes helped, and icing has helped.  I've just got to keep on that program!

We have been running around like crazy people all weekend, and I'm not going to lie, I'm a wee bit hungover today!  But I had a lot of much needed fun, so I suppose that's what counts!  Last night I went to a birthday party for one of my old coworkers.  (Happy early birthday Arran!) We realized that we hadn't seen one another in almost a year!  It's crazy how quickly time is passing.  Eric and I got down to Portland super early, so we ended up ducking into this cool bar he'd been wanting to try.  They were starting to celebrate Octoberfest, so the bartender immediately handed me some beads.  It took me about 20 minutes to realize the beads were little beer mugs! 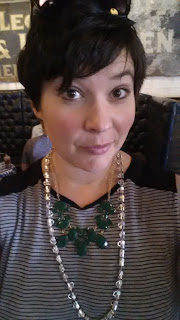 I figured you guys would appreciate seeing a picture of me where I have on makeup and my hair doesn't look like a hot mess spread on a Ritz.

The party started at this cool Mexican place that I hadn't been to before.  The food was really good, as were the margaritas, and I had a good time catching up with two of my other old coworkers.  After dinner we headed off to karaoke, which was a total blast.  My friend Dave is an attention whore (his words, not mine), so he was very funny up at the mic and also wanted to sing with everyone.  We ended up doing a couple of duets together, which was a lot of fun.  I got pretty sloshed and brought the mood of the room down with some Amy Winehouse, but people said I was decent so that was nice I suppose.  (liars!)  After karaoke we cajoled Dave into going back with us to the bar we started at and having a beer, which I absolutely didn't need but enjoyed nevertheless.

Tonight we are actually having dinner at Dave's house.  He and his family are moving away in October, which is completely a bummer since he's one of my closet friends, so I'm trying to get in as much time with him as I can before he leaves!

I had a great shift at the shelter today, it was one of those days that was very fulfilling and made me really happy.  I walked in and there were barely any dishes and really not that much laundry, which was so nice because I was actually able to spend time with the dogs!  There were quite a few in there today, so I had my work cut out for me!  I am a level one person, so the only thing I'm allowed to do is work with the dogs outside of the cage.  Basically you talk sweetly to them and reward good behaviors you see, such as sitting, being calm/quiet and that type of thing.  When I first got there some of the smaller dogs were super yappy, which was a bit overwhelming, but as I started walking through and they became focused on me and getting treats, they settled quite a bit.

Some people ask me if it's depressing being in there, and honestly it's really not.  A big part of my job is cleaning, so it feels good making sure that the animals have plenty of clean dishes and bedding.  When they get walked by the upper level volunteers I have to go in and clean the kennels, so making sure the dogs have a clean and comfortable environment to relax in feels good.  The other big part of our job is the interaction part I was just talking about, so the dogs constantly have volunteers coming through and talking to them, giving them treats, praising them and teaching them good behaviors.  They also get interactive Kongs twice a day and get taken out for walks by volunteers a lot, so they get a lot of positive interaction and mental stimulation.  I'm very happy that I chose to volunteer at a small shelter where they are able to really spend a lot of time with the animals and give them the attention they deserve.  It's fun to watch the shy or aggressive dogs become more trusting and relaxed with us, especially since that will increase their chance at finding a forever home!
Posted by Runs To Get Waisted at 1:12 PM