Due to continuing family stuff this week, I spent yet another week without doing any runs on my training schedule other than my long run today.  Just putting that out for full disclosure, but I am happy to say that through sheer determination/anxiety, I have caught myself up mileage wise to my training plan!

See, last week my schedule had me doing a 13 mile run, and I only did 11 miles because not only was I not trained up to a 13 mile distance, but I hadn't even done a double digit run yet.  Yikes!  Today I walked out of the door intending to do 13 miles, even though my schedule had me at 14.  Then as I started driving towards my running spot I was like you know, just screw it, I'm going to go the full 14 mile distance I was supposed to do.  I am just way too anxious about how far behind I am in my training plan, and even though doing a jump in mileage that high isn't great for you, I knew that doing it would put my mind at ease and allow me to fully jump back into my training plan next week with a clear conscience.

I got started later than normal, more like 7:10 am as opposed to the 6:30 am I prefer, but now that the weather is calming the eff down it's not nearly as big of a deal to go a little later.  The run started out pretty well, it was cool and there was such a nice little breeze, although the humidity is still in the 80 percentile range and that annoys me!  It causes such havoc with my breathing.  Physically though I felt pretty good, and I could tell that my pace was pretty fast.  Unfortunately when my Garmin is on interval mode, I can't keep track of my pace in real time, I don't have any way of knowing how fast I'm going.  Kind of blows, but it's not the biggest deal.  The one thing that I was musing to myself about today is how I wish I'd started using the interval function sooner, not even so much due to the Galloway aspect, but because my crazy brain responds to seeing mileage taken away rather than being added.  It's utterly bizarre, I feel totally bummed out and like the run is excruciatingly long if it's on the normal setting.  But there is something about the interval thing that tricks me into thinking "oh I only have this much left to go."  Especially when I get out of the double digit range and have thoughts like "I only have 9 miles left to go," which sounds insane because 9 miles is a long distance!  I guess whatever works for positive thinking right?

Fall colors are in full swing and it's just beautiful outside.  There is nothing more relaxing that hearing that rhythmic crunching of your feet over dry leaves, it's seriously the best.  Even though I would have preferred a cloudy day, the sun hitting the leaves made for such gorgeous colors, especially on the yellow ones.  It creates this blazing gold effect that of course my cell phone camera can't do justice to! 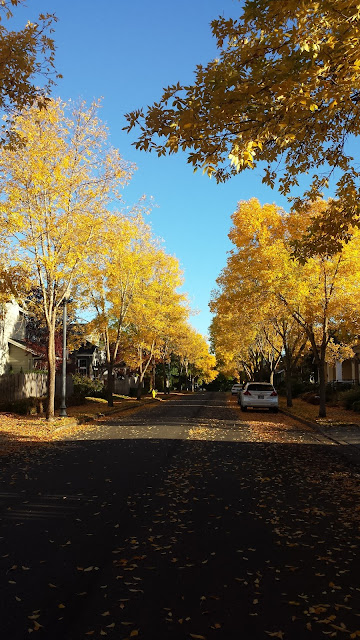 I had another neighborhood cat come out and tell me hi, in fact this one ran across the street and flopped in front of my feet so I would pet it!  I suppose I am a "dog person" were you to pin me down and ask, though I adore all animals, and I really love friendly cats.  They are so cute when they roll around. 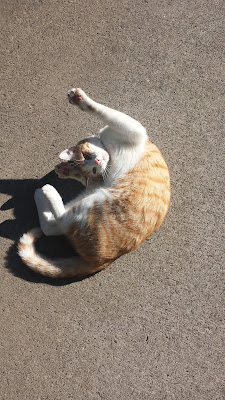 The end of my run was definitely tough, my legs get really fatigued and crampy, plus my foot was singing Ave Maria pretty early on in the run. I was better about icing my foot and stretching it out this week, which got it to a pretty solid point, but then the run totally aggravated it.  It didn't get really bad until I had 5 miles left, and then it was pretty painful from then on.  I also need to start researching what I can do to keep my legs from feeling SO fatigued, I mean obviously a 14 mile run isn't going to make them feel great, but I feel like they are more tired and shot than they should be.  I had to walk the last 3 miles because I had nothing left in my legs, which sucks because from an energy level I had plenty in the tank to run, my legs just simply wouldn't allow it.  I was thinking back to my first marathon training and realized that my legs had never felt this tired because I didn't run a whole lot!  Now that I'm doing the run/walk intervals I'm getting a lot more consistent running in.  I guess if you look at it like that, it's a positive thing.

I finished in 3 hours and 21 minutes with an average pace of 14:24.  And I managed to smile at the end if you can believe it! 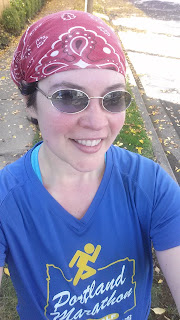 I feel positive about my pace for the most part, I just want to start getting a handle on this leg fatigue and foot pain so that I'm not having to walk so much in the end.  The walk breaks on the intervals go by so fast, but the unplanned walking feels like it takes for...ev...er.  Mainly though, I'm just happy and relieved that I am caught up to my training plan distance wise and can just carry on like normal.  It's definitely time and I feel that calm and happy feeling that I get when I know that my head is back in the game.  I took much needed time and space to be kind to myself emotionally even though I knew it wasn't going to be kind to my waist.  I feel like it's definitely time to switch gears back to being a little more regimented and focusing on losing weight again.

The rest of the weekend is going to be blissfully empty for the most part.  Today we're going to see Black Mass, which I've been eagerly waiting for since it actually looks like it will be good.  We're excited in general that awards season movies are starting to roll into the theater, since we pretty much live for what we call the "Oscar run".  Tomorrow I'll have my shelter shift and then it will be football and monitoring my fantasy football teams to see which of my players have career ending injuries this week!
Posted by Runs To Get Waisted at 1:36 PM