Hi readers!  As I suspected this week was a bit cray, so I really wasn't able to write a post though I really wanted to!  I'm hoping next week will see me in a bit more of a rhythm and I will be able to get on a regular posting schedule.  Let's review some of the week shall we?

I love, love, love my job.  I literally didn't know it was possible to go to a job and you know, be happy.  I know it's only the first week and I'm all high on love and feel goods, but it really is a great environment.  It's very quiet, mellow and laid back, and no one seems to really care what you do as long as you are getting your shit done.  Everyone has been welcoming and friendly, and my boss is one of the nicest guys you will ever meet.  He seems genuinely happy to have me there, and I am so grateful.  I didn't know you could go into a workplace and just be trusted to do your job, not be treated like a child, not have a bunch of corporate speak/TPS report bullshit going on, and be made to feel like you matter and what you do is important to the company.  I know you're probably like, really?  You just have to understand where I came from, all of this trust and goodwill is completely foreign to me, my last workplace scores a big fat zero on all counts.

I am just so happy!  I even became BFFs with the IT guys who sit next to me.  I had a software issue and tried to troubleshoot it myself first.  When I couldn't fix it, I gave them very detailed information about what I did, when the issues started and all of this type of thing.  It seemed to blow their minds that I had my shit together, and then for the knockout punch I made some Star Wars references.  And I'm not trying to be like "oh all IT people are geeks that like Star Wars" but...  I didn't think I was going to get them out of my cube after that, but I am glad to have made friends!

We had 3 concerts in one week (Rush, Brian Wilson were the other two), and we definitely went out with a bang by seeing Aerosmith on Tuesday!  I had never seen them before so I was kind of excited, but also not getting my hopes up too much since they're pepaws and I didn't know how much Steven Tyler's voice was going to hold up.  I am happy to say that I was pretty blown away and they put on a fantastic show.  Tyler's voice was great and has totally held up over time.  My favorite part of the show was them just about causing a riot when they started taunting the security people (who honestly were being total power trip dicks) and asking them if they hadn't gotten laid or something, and then encouraged people to defy security and get close to the stage.  You could see everyone being timid about it at first, and then we all started going up closer to the front.  We already had great seats, but you know, stage front is stage front.  I didn't overly take advantage since security was getting pissy, so I went back to my seat after a bit, but went back periodically to take pictures.  Security seemed to be relaxed towards those of us who were being respectful and discreet, so luckily I got some great shots! 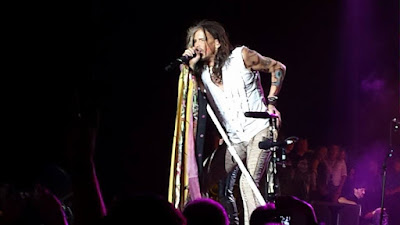 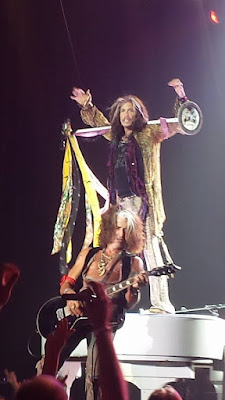 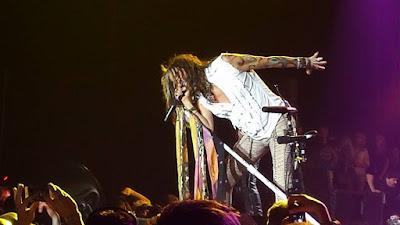 Today I had my first volunteer day at the animal shelter, and it was great.  I was a bit overwhelmed when I first got there and was like shit, forgot everything I'm supposed to be doing.  Luckily I had a few of the other volunteers who were more seasoned kind of helping me out, so now I feel a bit more confident about it.  There were no adoptable dogs to play with today, but there were a handful of them on hold due to medical/behavioral tests that I was able to hang out with.  I'm not at a level where I'm allowed to go into the kennels with the dogs, but can do training and socialization work from the outside so I did quite a bit of that.  I'm technically not supposed to talk about the dogs from that section of the shelter, so I'll just speak in vague terms and say that I enjoyed my time with the dogs that were there today.  A couple were very shy and frightened, but I was able to get them to warm up to me (with lots of treats of course) and by the end of my shift they were coming up to the front of the kennels and licking my hand.  Definitely made me feel good!

Tomorrow is Crap My Pants Time...

So tomorrow is my officially official marathon training start.  I am SO nervous about it for some reason.  I admittedly didn't run this week, it was just too much while I was trying to adjust to my new schedule.  But now it's for real and I will have to find a way to fit it into my life.

The biggest issue as always is the heat  We're having a record breaking summer (It was 105 F when I left work on Thursday), and it is causing me so much anxiety with figuring out when to fit running into the schedule.  We already get up at 5:30 am and leave the house by 6:30 for work, so I'd literally have to look at leaving at 4:30 am in order to run in the nice area before work.  That sounds...shitty.  After work will not be an option for me until October unless I do it at 9 pm, and even then the radiant heat from the asphalt will be bad.  I'm thinking morning will just have to do, though that will SUCK ASS.

My friend Marcy sent me this video the other day, and if you guys ever wanted to hear a perfect but funnier version of the types of rants I go on at home about the heat, then you need to watch this.  It's literally one of the funniest things I've ever watched, I had tears streaming down my face because it is so true!!  The Lord does need to delegate the temperature control to someone else, because this multiple days of 100 degree bullshit going on in Oregon is not working for me.  Anyways if you watch this, it has majorly NSFW language.