Smoke Gets In Your Eyes

I am thoroughly, entirely, completely over this summer.  My shitty attitude towards summer has officially developed into full blown hatred after this weekend.  I have proclaimed to any who will listen that on the first 40 degree day we have, I am throwing open the windows and blowing the fan vortex to end all fan vortexes into the house.  I mentioned a few posts back that Oregon and Washington are dealing with severe wildfires.  It is dangerously dry and we are in drought conditions, so it's not a good situation all around.  Last week (I think?) we had a moment where we woke up and thought we smelled smoke, and it ended up being due to wildfires.

Yesterday morning was fairly normal, then I went to work my volunteer shift at the shelter.  One of the boys I work with looked out of the window and commented that it looked weird outside, but I really didn't think anything of it until I left my shift.  I literally stopped in my tracks when I walked outside, because the sky was almost obliterated with a smoke haze, and the acrid smell of smoke hit me in the face like a mallet.  Long story short and some confusing scientific jargon later, we discovered that some weather front had blown a grip of wildfire smoke over the Portland area.  So that you get a good understanding of what things looked like, this is a picture I took when we were driving down the freeway yesterday. 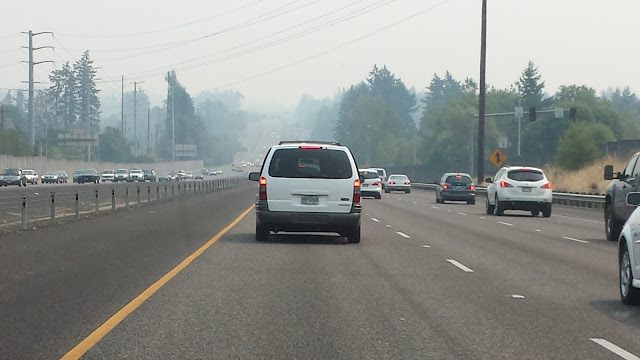 It was truly awful.  If you stood outside for any length of time, your eyes would start burning and you would begin coughing.  It was supposed to reach 93 degrees yesterday but I think it only hit about 85 because the smoke was so heavy that you couldn't even see the sun.  Of course my first thought was, will this clear up by Sunday so that I can do my long run, and the answer is no.  I had pretty much decided last night that it was not going to be safe to run, and when I woke up today got my suspicions confirmed.  I opened the patio door and was immediately hit with smoke.  And of course, there were all these lovely warnings.

We had the windows open for just a half hour this morning, and my eyes immediately started burning and my throat felt sore, so not running was a good call.  My breathing has been bad enough lately, I just didn't want to take the chance today of running and causing damage to my lungs.  And now that I think of it, I'm wondering if this is why I've had breathing problems all summer when I run due to smoke.  The wildfires have been burning for a couple of months, so it would make sense.

I also just wanted to take a moment to gently throw out some facts about our summer and my psyche.  When you guys read anger, frustration and an upset tone to my posts, this is the type of thing it's about.  I know I complain a lot about the summers here, but trust me, I have held back on the larger complaints.  We have broken all time records in Oregon for heat, which is like my personal hell on Earth.  This summer has been hell and torture for me.  This is basically a day in the life of our summer:


Imagine doing that every single day for three months, and add trying to schedule runs during a safe time only to have shitty variable such as wildfire smoke thrown in.  There is never a time when you feel cooled off or comfortable, and you literally forget what it feels like to feel cool breezes.  Something as simple as holding your husband's hand on the couch while watching TV becomes unbearable because it's too hot.  I am not exaggerating when I say that I feel intense depression and despair during the summers, and this kind of crap is why.  I don't say any of this for sympathy, I guess I'm just trying to make it clear that I feel impotent frustration every single day not because I'm running or required to train, but because I can't go run the way I want to.  When I'm out there, I am at the mercy of something I have no control over, and something that is greatly impeding my performance.  Anyway, I just wanted to put that out there so everyone understands.  Trust me, you will see plenty of smiling, happy pictures and run reports when I get some crisp fall days.  Which at this point will apparently be never since it's almost September and we're still projected to have highs from 90-100 degrees for the foreseeable future.

As far as my long run goes, I am going to have to look at the weather forecast and see what day it makes sense to do it.  Supposedly this smoke crap is blowing out of there late tonight or tomorrow morning, so, I guess we'll see!

On a different, lighter note, I did sign up for two races this weekend!  I am honestly trying to think of the last race I did, and I guess it would have been that 5 miler in Lake Oswego back in April!  I signed up for a 10k on Halloween and a half marathon in January.  I am pretty certain that my full marathon days are going to be over after Seattle comes and goes, purely from a body limitation.  I figure half marathons are pretty challenging and will be good for keeping up my fitness, plus this half is super close to my house.