So this week has not been my week, so I came to write a little bit about it and talk it out.  So as you know Sunday I was not able to do my long run because all of Oregon is on freaking fire, and the smoke levels were such that there were strict warnings about air quality and people not going out to do outside activities until the smoke passed.  I was like fine, whatevs, will do my long run Tuesday night.

So Tuesday I just had a complete brain fart when it came to planning and prepping anything for breakfast and lunch.  I didn't pack nearly enough food for myself, and I was very hungry for most of the day.  Usually I have a snack stash at work, but I didn't bring any new snacks to work, so I literally was about to gnaw my hand off by the time I got home.  Long story short, once I got home I had my very first binge eating episode in many, many months.  I don't feel like getting into details about it because I don't particularly want to relive it, but I went to town and then on top of it, attempted to eat dinner so that Eric wouldn't realize what I'd done.  I had not been horribly full like that in a long time, and I was just absolutely miserable.  I was stubbornly determined to still go do my run, and said to myself that even if I couldn't do my 8 miler, then I'd do my 5 miler.  I got out to my usual spot, and of course at 7:30 at night it was 82 degrees and like 73% humidity.  That combined with my uncomfortably full stomach was a disaster in the making.  I made it exactly one mile before I couldn't handle the heat and feeling like I was going to vomit.  I tried to think of all the other times when I'd pushed through when things got tough, and finally realized that this day was different.  I decided to go back home after my one mile.  This was basically my attitude about it: 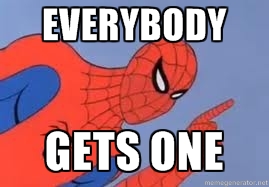 I didn't and still really don't know what to feel about everything that happened.  Part of me is still in shock that I had a binge after not having one for almost a year or so.  I feel like such a different person that I am just surprised that I had a moment like that in me.  I feel really irritated with myself because I could have easily prevented it by simply having enough to eat.  Anyway, I had a lot of thinking and feelings to sort out, and trying to determine how to keep this from happening again.  And of course I confessed to my Lovely Ladies group, and they were as supportive as always.  According to Meg I am a "badass MF", which I am not feeling so much this week, but I appreciate it anyway.  ;)  After some reflection I realize there are two areas that I need to revamp in my life, and that's my grocery shopping/food prep and acknowledging that evening runs simply do not work for me.

I want evening runs to work for me.  On paper they should absolutely work, but unfortunately this summer has completely trashed that notion.  The sidewalks bake all day in the 90-100 degree heat and simply aren't cooled down by the time I go (even though I wait until at least 7), and it makes for a miserable run every single time.  There is also the eating issue.  I religiously eat at 4 or 4:15 pm on the days I do evening runs in order to have time to digest, but it doesn't matter what I eat or how little of it I eat, I feel incredibly sick the entire run.  Combining heat with constantly burping or suffering acid reflux while trying to run is terrible, to say the least.  I also find that I am completely amped up and have trouble getting to sleep when I run at night.  So it's time to stop the madness.  Until the weather calms down  and I can run immediately after work when my stomach is empty, evening runs have to be off the table.  As much as I dislike having to wake up for morning runs, it really is the best option, plus the stats don't lie.  My performance is infinitely better in mornings than in evenings.  I am fortunate enough to work at a place that not only has a shower, but is in a safe area with plenty of sidewalks for running.  Yeah getting up early sucks, but at least it's done and out of the way first thing, and it's not a complete physical struggle.

The food thing is just something I've got to work on.  I'm totally out of a shopping groove since I started my job, plus it's been so hot that I haven't been able to make the type of meals that make tons of leftovers.  But I sat down yesterday and charted some stuff out to make, then went shopping.  I was pleasantly surprised at how calm the store was, so I think shopping weeknights are going to be a better option for me (especially once kids go back to school), so I just need to pick a day each week and make shopping a regular thing.  I got food for several meals that will make leftovers, plus tons of nice snacks to replenish my work snack drawer.  For the record, one of those peanut butter things smeared on top of those Kind bars is pretty much the most glorious breakfast or large snack on a higher mileage day that a girl could ask for.  Try it, you'll want to hug me. 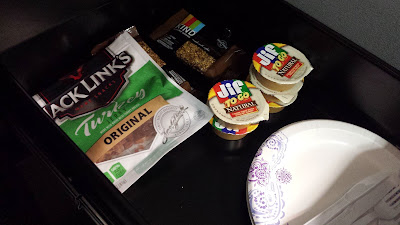 I still don't feel good about what I did and especially have not recovered physically, but I feel like at least I know what caused it and what I need to do to fix it, plus took action to try to regroup for the rest of the week.  That's really all I can do.

On that note, I sucked it up and did a run this morning before work that ended up going very well.  After a lot of hand wringing about how many miles I was going to do  I decided that I needed to quit stressing about how little mileage I had this week, and to just do one of the 3 milers on the schedule.  I mean yeah, it's not great that it's Thursday and I still have yet to do my 5 miler or my 8 miler, but I just can't fret about it at the moment.  I needed to go out and have a decent run in order to gain some confidence back and see how I felt.  So, three miler it was.  The humidity was at 83% (!!!), but at least it was somewhat comfortable.  During the run I felt labored and like I was struggling, but pleasantly discovered when I plugged my Garmin in that it was because it was my best 3 miler this month!  In fact, it was 7.57 minutes faster than my worst 3 miler of the month, and almost a minute faster than my best 3 miler in August.  It's one of those moments where feeling like you struggled is a positive thing, because it means that your heart was laboring a little more because you were pushing yourself and improving.  It was just what I needed to feel better about myself.  (3 Miler - Time:  36:50/Average Pace:  12:18)

I am going to squeeze in two more runs this week, the mileage to be determined.  Ideally I would like to do my 5 miler before work tomorrow, and my 8 miler on Saturday before we go to the fair.  Both of those things are a tall order, it's going to take me over an hour to do 5 miles, which means I will have to get here super early in the morning.  Not really an issue other than the fact that running in the dark skeeves me out, and it is staying dark a lot later in the mornings now.  But again, it's gotta be done, so there it is.  My concern with doing the 8 miler Saturday is that I worry about immediately doing my 10 miler on Sunday and having to do it with tired legs.  I don't feel like skipping my 8 miler is an option though, so I am going to do it.  I am also bringing Molly with me and giving her a good walk so that she is pooped out (literally) since we'll be gone all day, so that should add an interesting element.  Since the weather is supposed to be cool, I will be able to get away with leaving her in the car while I'm running.  I will periodically be getting her out to do some of my mileage with me, so my time is not going to be impressive.  As always, you guys will hear all the details!