Any Meatloaf fans in the house?  Yes?  Maybe?  Anyway, I actually did cover the meaty, big and bouncy portions of that album during my 5 miler yesterday.  If you follow my page on FB you already know a certain tidbit about it, and that's the fact that I eat stupidly all the time sometimes.  But more on that in a moment.  Anyway yes, after hand wringing, agonizing and calculating weather patterns with the seriousness of that Beautiful Mind guy, I decided that last night would be a good time to tackle my long run once we were done with dinner.  The weather was going to be somewhat cooperative and in the 70's, and the humidity was only going to be 37%.  A godsend after the 83% nonsense.

So dinner last night was the poor man's version of this Pioneer Woman recipe.  I make it somewhat frequently because it's delicious and fast, mainly because my version is way less involved.  I honestly only do the roast and the pepperocini peppers/juice in the crockpot and forego all of her stuff, it's actually pretty tasty with just that and probably about a gillion less grams of sodium.  I like PW well enough but my God, her recipes are outrageous sometimes.  It's like, not all of us are cattle ranching in bum eff Oklahoma, I don't produce a calorie burn needed to eat like this on a regular basis.  Anyway, I usually just serve the shredded beef over rice, but last night we got all fancy and had Kaiser rolls and made sammies.  Because I've accepted that I'm an old woman, I ate dinner promptly at 4:30 pm because I was hungry and because I felt like that would give me plenty of time to digest for a run around 7 pm.  Honestly guys, you would think after the Starlight Run/roast beef sandwich debacle, I would learn a thing or two about not eating a freaking beef sandwich before a run.  Apparently I have the memory of a hummingbird on meth, which is also likely why I signed up for and am training for a second marathon.

Per a reader's suggestion I changed my run intervals to 0.40/0.10 and my God, why have I not done this sooner?  It was SUCH a difference, I didn't feel nearly as winded or exhausted, it made the first 3.5 miles so tolerable and easy.  The better weather was a lot of that, but I know the new ratio helped.  I'd been reluctant to do it but honestly it really isn't that much less running than what I was doing, it works out to 0.80/0.20 per mile.  I think as my stamina increases I could eventually bump things back up to 0.90/0.10, but this new interval ratio works really well right now, and it definitely helped me feel some enthusiasm for future runs.  I did feel a little more zen about my slow pace, and oh was it slow yesterday, and I tried to have a kinder conversation with myself about it.  I just told myself that obviously yes, I am faster than the pace I'm doing now, but I have to accept that I will be slower when it's warm/humid or if I've eaten a meal.  I am sure that when it cools down and I can run at times that are normal, then I will be back to my old self.  All I can do really is continue to be consistent and wait for fall, and by then I'll be stronger due to the heat and my performance will improve.  So that was my Stuart Smalley moment of the evening. 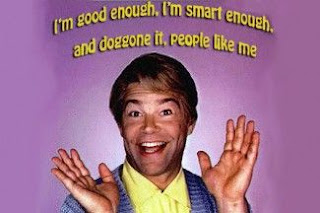 The weather was incredibly nice and there was a strong breeze blowing, which always helps with the cool off process.  I was doing some rather boring mile long loops and kept passing this old man who was out working in his front yard.  On the first pass we exchanged hellos, and on the second pass he gave me a side eye. (I also think he was stealing glances at the fact that I wore a lower cut top than intended, hence the bouncy reference, but hey any happiness I can give to pepaws you know). After my third pass he yelled across the street good naturedly and told me I was making him exhausted, which made me laugh and tell him I would much rather be sitting inside having a cold beer.  He chuckled and we went about our day.  So all of that stuff was good.

So the run part was okay, but I was really uncomfortable digestively the whole time due to that stupid sandwich.  I mean, who could have predicted that pickled hot peppers and fatty beef don't mix well with running, right?  Anyway, it actually eclipsed the discomfort I felt at Starlight from the roast beef sandwich due to how acidic the peppers were, I was getting raging heartburn.  The last mile and a half consisted of me bargaining with any higher power listening for me to not throw up in public, it was honestly awful. 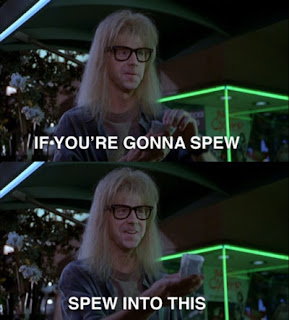 I finally had to give up and walk the last part, because it was either that or be sick.  I was already running at like 14:00 pace, so I might as well have walked.  I was SO mad at myself because I know better than to eat like that before a run, and the run would have otherwise been fine had I not done that.  Trust me, lesson learned, I will eat a little Kind bar or some little BS thing to tide me over at 4:30 and then eat a second thing post run.  Cannot go through that again.  Of course I say that and then you guys will get a post in like 4 months where I moan about running after a pastrami on rye washed down with a keg stand.  Hopefully not, because I am pretty traumatized after yesterday, to the point where I am completely uninterested in eating the leftovers tonight.  *shudder*

So I've covered "meaty" and "bouncy", here's the deal with the "big"....I feel effing fat.  It pisses me off.  My weight has actually not changed, so I am not gaining weight, but my digestive issues are rearing their head again and as a result I just feel bloated and disgusting, and my pants don't fit right.  I feel like I look fat and I do have an effing fat roll at my waist, which really sucks when you're counting calories and running 4 times a week.  In a move that will make my aunt or anyone who knows me really well fall over with shock, I actually unprompted and not under duress reached out to my doctor for a referral to a GI.  Enough is enough you know?  Anyway, it's made me sad the last couple of days.  It's not like I've ever had or ever will have a sexy, flat midriff, but FFS, if I am running and not giving into the desire to mainline cake on a daily basis, then I'd better have a better body than what I got.

Anyway, that's all I've got.  Oh and hopefully SNL will not sue the crap out of me for using TWO SNL memes lol.
Posted by Runs To Get Waisted at 12:12 PM