Let Me Stand Next To Your Fire

Today was long run day, and I was getting such a good night's sleep to prep for it when suddenly at 4:30 am I smelled what you never want to smell in the house...smoke.  Let me tell you, nothing on an evolutionary/survival level will wake you up faster than smelling smoke, it completely freaked me out.  I did that thing where you are trying to rationalize and be all scientific even though you are not awake or remotely human yet, and was going through a list in my head trying to figure out what was up.  I was like well, I don't think it's in the house because the smoke detectors aren't going off, and surely Molly would be trying to wake us up.  I was positive it wasn't a jackass outside of our window smoking, because I cannot in any way tolerate cigarette smoke, and this was a totally different type of smoke.  I thought maybe one of the houses on the street was having a fire, but I couldn't see any evidence of that out the window.  I finally just got up because the smell was totally acrid and starting to bother me.

Long story short, apparently it's the smoke from the 33 wildfires currently burning in Oregon.  Eric confirmed that when he lived in LA, this is what it would smell like when they got bad wildfires.  Per the Weather Channel, winds are blowing from the east where a majority of the fires are burning, so there were all kinds of warnings about not keeping your windows open a lot and all of that.  In other words, perfect for doing a long run right?

In a way it was since it was only 53 degrees or so when I started out.  It warmed up quickly, but at the beginning of the run I felt really great and like I was flying.  In reality I was probably doing maybe a 11:59 minute mile but hey, I'll take it.  I know I haven't been really detailed in my run recaps but honestly....everything is going so smoothly this time around.  With the Galloway method my splits are pretty dead even, I feel decent enough physically and there's just really no excitement to report.  And that's GOOD.  I think back to how much I struggled in 2013 and how hopeless I felt, and now it feels...simple.  I don't want to use the word "easy" because it's not and it never is really.  But I feel like I have it somewhat together, I know what to do and what to expect, and I know roughly how to keep from having a hot mess of a run.  And you know, running more than one day a week makes a difference.  Who knew right?  ;)  I just feel like I'm getting a lot stronger and my lungs are getting better all of the time.  I actually feel kind of pumped for the weather to get cooler just so I can see how fast I actually am.  I track all of my training information on a calendar, and for each run I record what the temperature was when I started, as well as what percentage the humidity was at.  I started relaxing about my pace when I saw the data, because I realized the temps/humidity absolutely affect me and that I might as well roll with it for now.  I really think I could start breaking into average pace times in the 11 minute mile area once fall hits, and that's pretty exciting to me!  I know that's "slow" to most people, but it would make me feel like Jesse Owens to be able to run in the 11's.  I mean that's all I've ever really wanted, was to be able to work hard and actually see improvement.

My weight is also falling little by little, which ultimately is what makes me happy.  I did have to bump my calories back down to 1500 because  my weight was getting stuck and I felt like 1600 was too much for now.  Once I hit higher mile runs I'm going to reevaluate, but for now I feel like I'm in a good place where I'm fueling my body and feel adequately full most of the day, yet am still dropping weight.  I do eat back most of my exercise calories and make sure I have little snacks between meals, so I definitely feel like I'm getting what I need.  I also keep an eye on my protein and carb macros to make sure the levels are good.  I am really hoping to drop 15 to 20 pounds by the time the marathon rolls around, but we'll see.  20 pounds is probably an aggressive number, but 15 is like 5 pounds each month, which doesn't seem too out of the realm.  I still haven't decided on a goal weight, simply because I don't know what will look and feel appropriate until I get there.  I've always had 140 as a number in my head, but am not sure if that will make me look too thin or not.  I was around 170 in high school and looked pretty trim (of course I at the time thought I was a total lard ass...oh if only I could slap Young Me), so maybe 150 would be more appropriate.  Anyway I'm just blathering at this point, but it's been on my mind lately!

I felt pretty great for most of the run until the last 2 miles, mostly because it was really starting to warm up and my legs were getting tired.  I finished fairly strong and without taking any extra walk breaks!  (7 mile run:  Time; 1 hour, 30 minutes; Average Pace - 12:56) 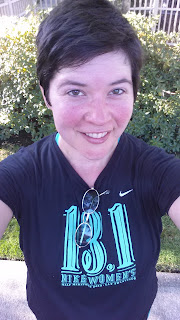 The weekend has otherwise been pretty mellow.  Friday night we went to see one of my most anticipated movies of the year, Straight Outta Compton.  If you are a fan of the group NWA I think you will love the movie, I certainly did.  I heard a lot of people say that the trailer came across as looking cheesy, but I assure you that it was not at all cheesy and was VERY well done.  I even wept a bit in the end, but of course y'all know I'm a little bitch baby about movies and get the feels easily.  I personally feel that it deserves some Oscar or Golden Globe nominations, especially for the actors, they were all fantastic.  If you have been reading this blog for more than a second, you know that I am very passionate about the Rock and Roll Hall of Fame, so ultimately my main anticipation came from hoping that this film will give NWA the chance they deserve to get onto the ballot and voted into the Rock Hall 2016 class.  They were on the ballot last year and unfortunately didn't get in, which I thought was completely unjust.

I get very frustrated with people who bitch about rap acts getting into the Rock Hall, partly because there is usually not so veiled racism involved, and partly because I feel like these people are not looking at the bigger picture when it comes to music.  A band like NWA was life changing and their music had a domino effect on the rap and hip hop industry that exists even now.  Their music captures a political time and tells a story.  For me, rock and roll is defiant, it's dangerous, it shirks the establishment, and often it's a voice of protest.  If that's the definition we're using for rock and roll, then NWA couldn't BE any more rock and roll.  I literally see no difference between them and a band like the Sex Pistols or Pussy Riot.  Anyway, the Rock Hall is about honoring bands that are musical pioneers, made history and influenced the industry.  And if horrible ass boring GREEN DAY can get in, then what the hell are we waiting on for NWA???  Anyway I will stop there, cause otherwise I'll go on for two hours.

Yesterday I didn't feel well, so after my volunteer shift at the shelter I just kind of hung out at the house and napped, then went grocery shopping.  I am all stocked up for the week and have meals planned out, which always makes me feel a little more on top of things.

After my run today I've just been relaxing and puttering around the yard getting some stuff done.  I've started cleaning up the garden a bit, although admittedly I have pretty much neglected my garden this year and everything is dead anyways.  The one thing holding strong is this mutant sunflower, which I measured on Friday and it is a whopping 9 ft tall! 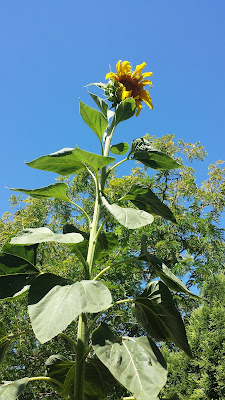 In a sad moment, I harvested the very last of my Sungold cherry tomatoes with the help of a very nosy greyhound.  Love those tomatoes, they are the best! 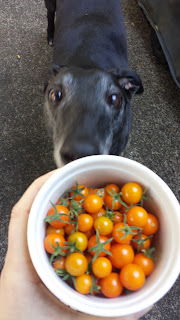 Posted by Runs To Get Waisted at 1:08 PM