Just a quick post to let you know that marathon training has commenced!  I got up at an ungodly 6:15 this morning and just decided to head out and get it over with since it's going to be 95 degrees today.  Since my first run was a 3 miler and it was still relatively "cool", I decided to take Molly with me and do a 1 mile warm up walk with her, then leave her in the car while I did my 3 miles.

Really nothing dramatic to report, everything went fine other than it is so GD humid that I was getting frustrated.  I did keep my 0.90/0.10 run walk intervals, but next time may go for 0.40/0.10.  My body actually felt good, it was just gross and hot.  It was 66 degrees and 49% humidity at 6:15, so that should tell you something!  I took a pic before Molly and I got started, and don't we look super thrilled?  That's the look of a lady who would rather be drinking coffee in her jammies, and a dog that really needs to take a dump and doesn't have time for selfie nonsense. 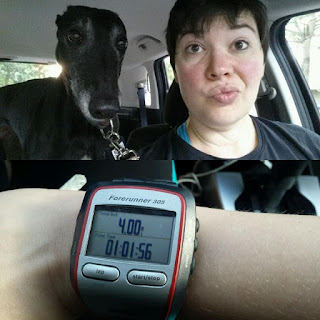 Oh and I had several awesome people making treadmill and indoor track suggestions yesterday, and I did want to address why I don't use a treadmill like pretty much any sane person would in this weather.  The long and short of it is that any time I try to use the treadmill for running, I have major injury issues.  My major plantar fasciitis issues began with me running on the treadmill in 2009, and that snowballed into two very painful years that I don't care to revisit.  Once I got healed up and started hitting pavement, plus changed to my minimalist shoes, my issues have mostly disappeared.  I have tried over the years to hop on a treadmill and run, and I immediately feel horrible pain in my feet and knees.  It's not something I am willing to risk, especially since it took me two years or longer to get healed enough to the point to where I can run.  Let's face facts, I am 35 and my body isn't exactly going to age like a fine wine, you know what I mean?  I already run with a lot of aches and pains, but I know enough about my body to keep it manageable, so I won't risk treadmill running even for the sake of comfort.

As for indoor tracks, our old gym does have one but it just isn't appealing really.  It takes 12-13 laps to go one mile, so the thought of having to do that for an 8 miler seems like torture.  Plus I would get SO angry when I would try to run up there because people either let their toddlers have a free for all up on the track (despite there being multiple signs saying that no one under 16 is allowed), or soccer moms would come in with their huge ass strollers (seriously, why are they so big now) and would leisurely walk side by side with their friend who also has a big ass stroller, so you couldn't get past them.  I deal with enough emotional bullshit and irritation on runs, I can't factor in having to hurdle over someone's snowflake or having to wait for Starbucks guzzling earth mothers to notice that um yeah, there's a person running on the RUNNING track and trying to get around them.  Clearly I have no bitterness left about this stuff 4 years after the fact!

Anyway, NOW you guys see why I get so upset and obsessive about the summers and the heat up here.  Running outside is honestly my only option, and it's a shitty option when you get panic attacks in the heat.  I truly do fight a lot of depression when it is summer and very warm, if reverse seasonal disorder is a thing I definitely have it.  I mean you know, I've got to ovary up and do it anyways, there's really no other way around it, but that's just kind of where I'm coming from.  I'm sure it's character building or some shit, I'll just have to deal with it.

As for the rest of the week, I will probably do my runs early in the morning.  I will update as the week progresses!
Posted by Runs To Get Waisted at 10:19 AM