So last night Eric went out with one of his man friends (whose sweetheart of a wife consequently is one of my good lady friends), and while I was glad that I could binge watch something awful on TV he was able to have guy time, it did leave me wondering what I was going to have for dinner.  After Wednesday's horrible experience with the beef sandwich, I was not going anywhere near those leftovers, no sir, although I was wringing my hands about leaving a perfectly good Kaiser roll to languish in the pantry.  I was doing the typical "oh there's nothing to eat in the house" thing when I remembered a tasty black bean burger recipe from Pioneer Woman.  I know I dissed her a little bit in my last post, not because she's a bad cook but because most of her stuff is a bit opulent on the caloric level.  Anyway, these burgers are one of the few things of hers that won't make your arteries run screaming.

I do like a good veggie burger *if* it's made with care, good ingredients and not with weird soy crap.  I don't do the frozen mass produced veggie patties.  There was a restaurant near my house named Sweet Oregon Grill that made THE BEST homemade veggie burgers that almost would rival a normal meat burger, and I would get them every time I went on Thursdays with coworkers long ago.  Alas, Sweet Oregon Grill burned to the ground many years ago, so there went my veggie burgers and many fun hours of us all drinking our paychecks away.  Anyway, I've tried to make my own veggie burgers over the years, but they never come out quite right.  They're either mushy, crumbly or flavorless.  Except Pioneer Woman's.  No crumbling, the texture is right, the flavor is good, etc.  Oh and they freeze beautifully, so they pass the Annelle from Steel Magnolias test.

I didn't take pictures of the during process because they look gross, plus Ree photographs beautiful step by step instructions in the recipe.  But here are my beautiful burgers in mid fry... 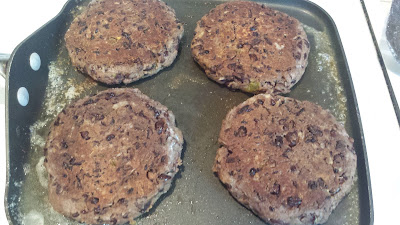 And then when my dinner burger of choice was selected and dressed on the lonesome Kaiser roll...I was too lazy to remove that tiny bean speck before photographing. 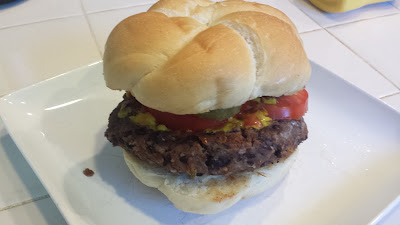 It was honestly so good, I was glad I remembered the recipe!  The grated onions give the patties fantastic flavor, and I also threw in a few diced jalapenos.  I was also glad that I had everything in my pantry to make it and didn't have to make a random trip to the store, since spending money right now gives me a little bit of the vapors.  They really are pretty good on a caloric level, though I know some may get their panties in a twist about it containing bread crumbs.  Feel free to try another binding agent, but the crumbs work really well, plus bread is delicious.  If you are wanting to make a bunch and freeze them, cook them first then cool them on a cooling rack, flash freeze them in a single layer on a sheet pan covered in wax, then stash them in freezer bags.  To heat them up I just throw them in the toaster oven for a few minutes until they are hot.  I really need to set aside some time this weekend to make a big batch of them to freeze, they would be a great lunch or dinner after a long run.  Filling but not fatty as it were.

Since I was on a roll, I also made some plum crumble bars to bring into the office today.  One of my coworkers brought me a giant bag of wild plums, so of course I elected to make a dessert with them instead of anything healthy, though I have been eating a bunch of them raw!  I didn't take pictures of the bars, and again I'm entirely too lazy to go to the office fridge to get them and take pictures of them.  Anyway, they turned out pretty well though they were a bit more labor intensive than I care for most baking recipes to be.  Cooking the jam layer was a pain in my butt, I was glad that I did it on a totally separate day or otherwise I would have been spending an ungodly amount of time on these last night.  Since I used wild plums the jam was tart, which honestly offsets the insane amount of butter in the shortbread part.  Hopefully my coworkers think so too!  If anyone is interested, here is the recipe:  Plum Crumble Bars

I do miss baking, ever since I have been trying to live healthier in the last couple of years I don't do nearly as much as I used to, which kind of makes me sad.  It's just that you bake something delicious, and then there it is in your kitchen, and Eric and I both have a bad enough sweet tooth without having 30 cookies or a whole cake sitting around.  It's nice to have coworkers to bake for, because now I can just keep two portions of something at the house and bring the rest in!
Posted by Runs To Get Waisted at 7:43 AM