Despite being exhausted, I am still floating on Cloud 9 like a school girl today because last night I saw Brian Wilson (of Beach Boys fame) in concert.  My aunt was kind enough to go with me since Eric was not in town (he was off having a concert adventure of his own), and we totally had a blast!


The concert was pretty much everything I dreamed it would be.  It's nothing short of a miracle that Brian Wilson is alive, much less out performing concerts, so I really felt honored to be in the room listening to this genius of a man perform.  Yes he is peculiar, but in an almost charming way, and I was actually pretty amused at his blunt and almost childlike honesty on stage.  He's overcome so much in his life that you can't help but deeply respect him, it's like he's the ultimate underdog.  His band was marvelous, although it didn't hurt that Al Jardine was playing with Brian.  Al's voice sounds almost exactly the same and it was so comforting to hear that familiar harmony in there.  (Brian can't or won't hit his famous falsetto anymore, and he actually sings Mike Love's parts which are much lower.)  In another "mind blown" moment, Al Jardine's son Matt took over on lead vocals for songs such as "Don't Worry Baby" and "Wouldn't It Be Nice" and just holy shit.  Have you ever heard a singing voice that sent good shivers all the way to your core?  This guy had the most beautiful falsetto that was exactly like Brian's back in the day, there were times it was almost like hearing a Beach Boys album being played.  Gorgeous, gorgeous voice that just left me swooning.  "Don't Worry Baby" is also one of my favorite songs, so that set my swoon trigger into overdrive and had me a little teared up.

My mind was blown by the end of the night.  They played everything I could have asked for, plus more.  It was two solid hours of all the Beach Boys music that has mean so much to me, including a 6 song encore that just about blew the roof off of the casino.  I left feeling grateful and wishing I could see him 20 more times.

And of course it was awesome spending the evening with my aunt and totally cracking up the whole night!  The one thing that was a bummer was that we had to take the casino shuttle down and back because we were unable to get a room there to stay overnight.  The casino is a haul from where we live and we're both blind as bats at night so we didn't want to drive.  So bus it was.  While I'm grateful we had the option to ride safely and that doing so also gave us the ability to have a few cocktails without worry, the driver took the looooong way there and back.  We had to leave at 2:45 for this 8 pm concert, and then didn't get home until 1:30 am.  My rock and roll lifestyle is wearing me out!  Brian was my 2nd concert in a week of 3 concerts (I know, the struggle is real).  I am definitely ready for August since we don't have really any social engagements.  August will be all about adjusting to life as a working lady and squeezing marathon training into my life.

Today is my last day of unemployment and it feels so strange.  I definitely have a million feelings rolling around in my brain: relief, readiness, nervousness, excitement and a tinge of sadness.  Really the only reason for the sadness is because I will really miss hanging out with Molly all day.  I know that may seem crazy to non-animal people, but Molly is my buddy and we've become so attached to one another.  It will be hard to not be able to go for our long walks and that type of thing.  She's really blossomed in personality since I've stayed at home, and I admit to being smugly happy that she's a Momma's girl.  I know she will be just fine and will adjust, but I'll still miss her!  On the other hand, it is exciting to start a brand new chapter in my life at a great job at a nice company.  I've just been overly grateful and in love with the world the last few days, so I'm just insanely lovey and flowery this week!  I can't remember the last time I felt this hopeful and excited!

Today I did a bunch of food prep, coupon clipping and shopping in order to have one less thing to stress about as I enter this new era.  I am not one of those crazy coupon people (no offense if you are), but I try to have a system and match coupons with the weekly grocery fliers in order to get the best deals.  Right now I'm trying to focus on finding deals for pantry staples so that we can throw together quick meals with some planning.  I've cut back a lot on the extravagant meals and grocery trips and learned to make due with what I've got in the pantry.  I do want to make an effort to bring lunches to work, which requires lots of planning and prep!  I really want to make an effort with my marathon training to have my nutrition in check.  I don't want to eat poorly like I did the last time, or to not monitor what I'm eating.  Obviously there will be indulgences, but I want to be somewhat strict about tracking, eating regular snacks and keeping things healthy so that I am performing at my best.  I've done a pretty poor job of that the last month and my weight loss has stalled.  I definitely don't want to go back to where I was!

Today I made myself pancakes for breakfast, and decided while I had all of the crap out that I might as well make a double batch and freeze them.  Eric really likes frozen pancakes as a breakfast option in the morning, and it seems like those are hard to find in the store anymore, so I figured he would appreciate it.  Plus it's cheaper than buying the store bought ones!  I just cooked them, cooled them on a cooling rack, then froze them in a single layer on individual squares of wax paper.  Once they were totally frozen I put them in freezer bags and voila! 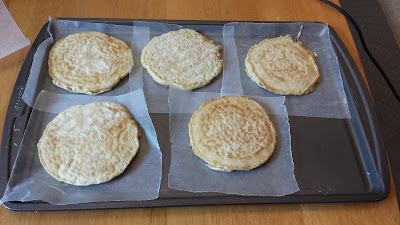 I also cut up tons of veggies, fruit, hard boiled a bunch of eggs and that type of thing so that we can just grab and go for lunches this week.  I have a couple of meals planned out that will give us leftovers, so hopefully that makes the week feel a little more manageable.  I already planned and logged my meals for tomorrow, so I am really not even going to have to look at My Fitness Pal!

I am going to do my best to post this week, but please be patient if I don't since I'll be adjusting to my new schedule!
Posted by Runs To Get Waisted at 8:17 PM