I have done it again!  I went out this morning and ran 5.5 miles, and even left the house early no less in order to get it done!  Before I get into the deets, just thought I'd talk a little bit about my strategy for the next couple of months when it comes to running.

I feel ridiculously good lately and motivated to run.  I don't know where the hell this motivation came from, pretty much nothing in my life has changed, but I am just rolling with it.  Part of me thinks my motivation comes from ice cream, because it's hot and I want to eat ice cream, but can't justify the calorie expense unless I go for a run.  That's shallow and not something a "real" runner would do perhaps, but I'm also rolling with it.  Anyway I decided that from now until marathon training that I'll just be doing "dealer's choice" runs at least 3 times a week.  It can be any distance from 2-6 miles, and it can be any 3 days (or more), which I feel is a strategy that will give me flexibility while also giving me a bit of discipline and getting myself used to getting out there and doing runs.  I do need to build up a running base, so I feel like that's what I'm doing even if ice cream is a bigger motivator over marathon medals for the moment.

So back to today's run.  Today was one of those times where the mental struggles that come with marathon training come back, and it's not your body that is fighting you, but it's your brain.  Fighting with your brain is WAY worse that something being physically wrong with you.  If something on you hurts in the bad way, well you just stop and let yourself heal up without question.  With the mental stuff, your brain keeps saying all these crazy things and begging you to stop, even though you know physically you are just fine and need to keep going.  So that was my whole run today, was wanting to quit and arguing with myself.  And to an extent I'm always like that, and I always want to quit for the first 1-2 miles even when things are going good.

It will come as no shock to you that the weather was probably the main thing causing the mental distress.  I did what I was supposed to and got out there early, but it was still so hot and humid that it felt like someone was constantly trying to wrap a wet quilt around me as I was running.  The humidity was giving me the sensation of not being able to breathe, which was making me panicky.  The first two intervals (I was doing 1 mile/0.10 mile intervals again) were okay, it was just mainly me trying to work through hip pain.  I pretty much always have hip pain so, no biggie there.  But that third interval, oh my God.  It was so hard, I was panicking about being hot and not being able to breathe and just hating my life.  The arguing about wanting to quit set in, and even thinking "well you SAID dealer's choice, you could stop" and then thinking "you HAVE to get used to running in the heat, there is no way around it, so quit being a titty baby about it."  It's so like when Gollum/Schmiegel are arguing in LOTR, that's my brain pretty much.

I was trying my damnedest to distract myself and pull out of the negativity.  I tried to concentrate on how some houses have a ton of jasmine bushes in their yards, and the smell is so heavenly that it's like a bit of aromatherapy on the runs.  I got a mini boost of happiness from some adorable duck friends who were randomly in the middle of this subdivision: 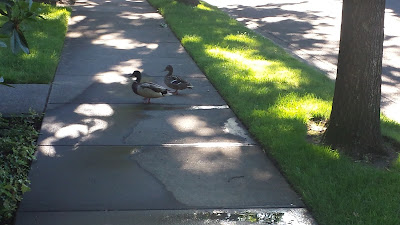 But still, I could not break out of this horrible headspace.  Finally, I started thinking about my ladies group, and let me just tell you, all of my friends in there have been so inspirational lately and really getting after things.  I thought about Tiina from One Crazy Penguin who is training for a tri, and didn't let a cold stop her from getting in a bike ride AND going for runs in the heat when I know it must have been so miserable physically.  I thought about Meg from Running Just As Fast As She Can, who never gives excuses and the other day just did a 4 mile run while pushing her twin boys in a double stroller.  I thought about Anna from Losing My Puppy who is in the middle of a home restoration project, which I admire so much because it's something I'm not able to do.  (Seriously, ready the bail money and light a candle at the nearest church if you ever hear of me attempting a huge reno project).  I thought about Jessica from A Little More Each Day, and how dedicated she is to running and how she's always out there getting her training done.  And the list goes on and on, there are so many amazing ladies in our group who are doing things that are so awesome.  Many of them are doing things so much harder than a 5.5 mile "just because" run, and I felt like if they didn't quit, then I shouldn't either.  I knew if they were there (and this is crazy because I've never met any of these women in person), that they would be telling me I CAN get through it, even though it sucks, and that I'll feel good about myself afterwards.

I did get through it, it did suck, and I did feel really good afterwards.  I was also was somehow a minute faster than I was on Saturday if you can believe that.  I am SO glad I stuck it out. 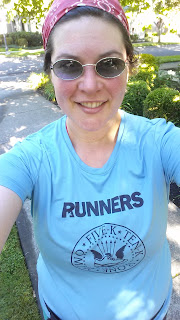 On a non-running front, it's been hotter than balls here, and our thermostat hit 100 degrees yesterday. 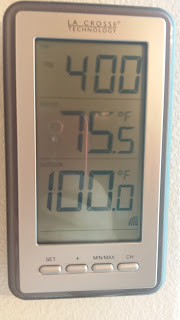 And my garden has been blowing up and there are so many crazy flowers from my "Save The Bees" and "Bring Home The Butterflies" seed packets I planted.  Half the time I don't know what they are, but lately some beautiful poppy varietals have been coming up.  These are apparently Iceland poppies, and they are just so gorgeous and delicate. 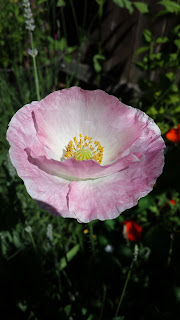 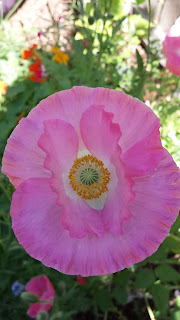 Georgia O'Keefe would love that last one.  Just sayin'....

Oh and last but not least, the kiwi.  After a sooner than usual bloom and a daily scramble to get out and self pollinate the crazy thing, baby kiwis are starting to emerge.  I will probably do a more accurate count when they're bigger, but I counted 46 kiwis yesterday.  We are so in trouble this fall! 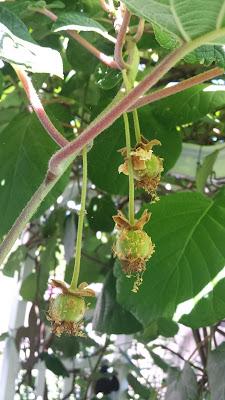