Last Thursday Eric was awesome enough to drive me up to Buffalo so that I could see Niagara Falls for the first time.  I wanted to split our Niagara Falls trip into a separate post since I didn't want to overload you guys with pictures, even though I kind of already have.  ;)

OMG you guys, if you have never seen the falls, you should make it a priority before you kick the bucket.  It is unbelievably beautiful there and I feel so fortunate to have experienced it.  It was FREEZING (as in your bones feel like they will shatter) and the wind was insane, but it was worth every moment.  Due to the weather barely anyone was there, which was actually a bonus!  We were only able to go on the American side because I don't have a passport, but it was gorgeous regardless.  Being near something that powerful was a complete rush, it made me feel incredibly small and it was glorious.  The pictures I took won't do it justice, mostly because it's hard to take a great picture when you are shivering. 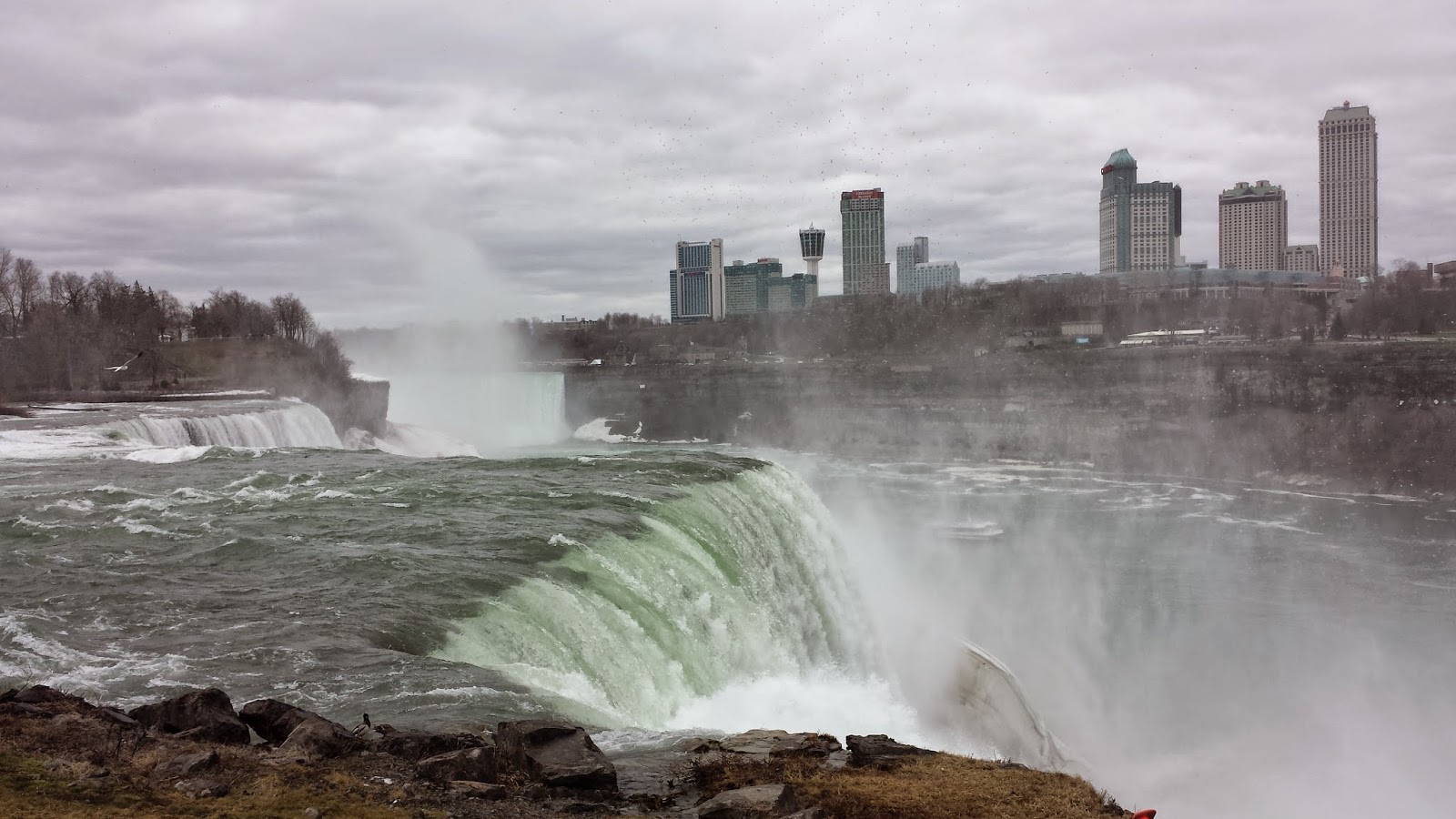 The river was a beautiful blue green, which didn't totally come across in the pictures due to the cloudy day.  And as you can see it was so cold that there were huge chunks of ice at the bottom of the falls.

Afterwards we went to meet one of Eric's longtime friends at a bar called Founding Fathers in Buffalo.  Lee was one of the last friends of Eric's whom I had not met, so it was nice to finally meet him in person!  I am a really lucky woman, I can honestly say that I like every single one of my husband's friends and Lee was no exception.  We all had a great time chatting and eating.  If you are ever in Buffalo I highly recommend Founding Fathers.  The food was fantastic, I had a bowl of Italian Wedding soup that was SO good and warming after our freezing trip to Niagara!  Have you ever had this soup?  I had not and it was insanely yummy.  I didn't realize how pro tiny meatballs in broth I was until I had this soup.  I only got a cup of it plus a pastrami on rye, but kind of wished I'd just gotten a big ass bowl of the soup instead.

There was great art and memorabilia in Founding Fathers, including this really cool stained glass piece.  I wish I'd taken more pictures inside, but didn't want to be one of "those" people, especially since we were socializing with his friend! 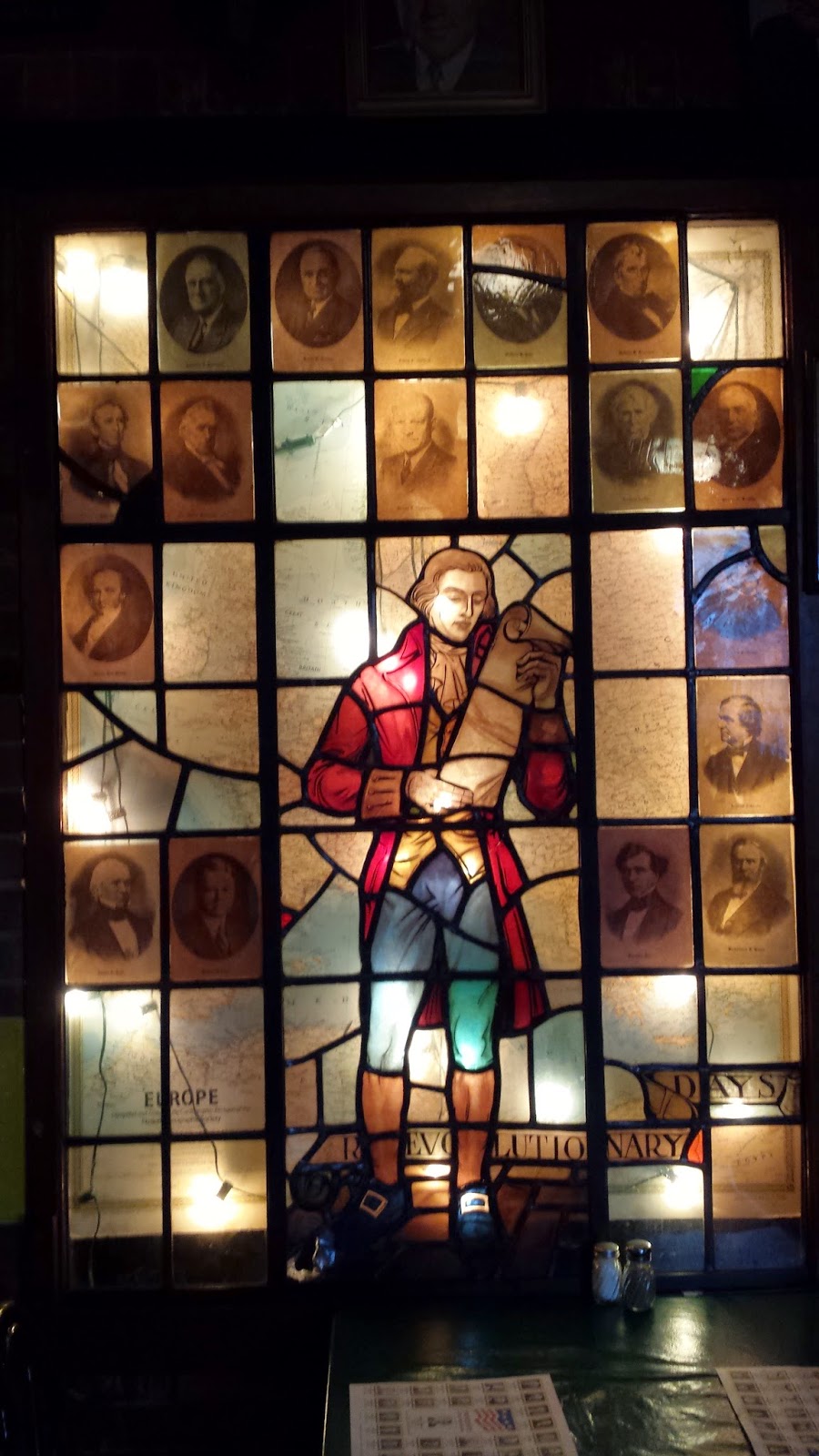 This was actually the first time I was in Buffalo proper, and I really want to go back.  The architecture on some of the buildings was really gorgeous, but I am nerdy and like that type of stuff.  Eric pointed out the Buffalo City Hall and said they modeled the top of the building in Ghostbusters after it.  Pretty interesting stuff.  We also drove past Ralph Wilson stadium (Go Bills!), which was pretty neat.  Someday we'll have to go back to a game there!

That is just about it on the trip front, so thank you for enduring my many pictures, and I will be back to posting about health stuff now!  May definitely will be a new month filled with different challenges for me!
Posted by Runs To Get Waisted at 6:57 AM