Yesterday was my first time running the Starlight Run 5k, which is a fast little race that happens directly before the Starlight Parade in downtown Portland during the Rose Festival.  I had never run Starlight before, but signed up because I got a sweet deal on it due to running Shamrock, which is about the ONLY good thing I got out of running Shamrock!  I was telling my ladies group that it was super weird to run an evening race. I'm so used to getting up early and getting races over and done with then going about my day.  Yesterday consisted of kind of twiddling my thumbs and trying to hydrate really well all day, but not too well since I didn't want to feel bloated.  We ate pretty horribly (ice cream for lunch yo!), but at the same time I didn't go over my calories so, win I guess?

My aunt and uncle were kind enough to drive us all down to Portland and spectate with Eric, and we decided to go down early to secure parking and try to grab dinner.  The guys dropped us off to find parking while my aunt and I went to Lincoln High School to get my bib, and everything was pretty easy peasy.  We met back up with the guys and decided to go to Elephant's Delicatessen to grab a bite to eat.  I was really torn on what to get since I was actually pretty hungry, but didn't want to eat too much.  I briefly entertained grabbing a salad out of the cold case, but honestly they all looked like they might have come over on a boat with Vasco da Gama, so I grabbed a roast beef sandwich instead.  It was a normal sized sandwich but I planned to eat only half of it so that I wouldn't be too full.  That lasted about 30 seconds into the meal, because it was one of those deals where I didn't realize how hungry I was until I started eating, and then the second half of the sandwich was in my mouth.  Oh boy.  At least I had a little over an hour to digest before the race right?

After some stellar people watching and chit chat, we made our way back to the high school where the start of the race was.  We made plans for our meet up spot post race, and then I went off to the start line with 20 minutes to spare.

I have never felt intense heat the way that I did yesterday.  The weather was in the mid 80s and it was very humid all day long, which was starting to concern me, although things did feel somewhat cooled down by the time we got to Portland.  The actual weather was fine by the time the race got going at 7:45, but the asphalt that had been baking in the sun all day was radiating this intense heat that was akin to a baking pan that's been out of a hot oven for a few minutes.  I was starting to feel overheated just standing at the start line.  I was definitely becoming more nervous by the second about this race, specifically because they were pretty stern about there being no walking.  I wasn't too concerned about that mandate until I felt the heat coming up from the road, and then my expression was along the lines of yellow shirt guy down there. 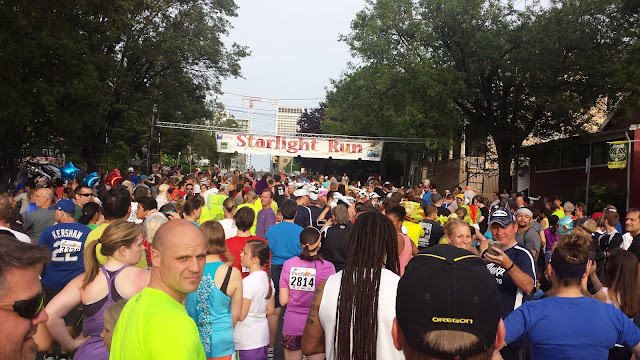 The race was pretty informal but somehow very organized.  It wasn't a timed race, no corrals, and there was no water or on the course or anything like that.  They just honked a bullhorn very promptly at 7:45 and we were off.

It was literally one of the toughest runs I've ever done, while somehow being very fun at the same time.  The intense heat of the asphalt made the experience very punishing, and I was overheated by the time I hit the first mile.  That also happened to be about the time I looked at my Garmin for the first time, and my eyes bugged out of my head when I saw I was running at a 7 and a half minute mile.  And here I was wondering why my heart felt like it was going to burst out of my chest.  That seems to happen to me at every freaking race, I get caught up in trying to keep up with traffic and go much faster than I should.  I've really got to break myself of that.  I deliberately tried to slow myself down because I knew I was going to pay dearly for it if I didn't, but could only get myself down to about a 9 minute mile.  By that time the roast beef sandwich was catching up with me and I was getting a pretty magnificent stomach cramp, along with feeling faint from the heat.  Soon my mantra became these three statements:

1.  You must finish this race.
2.  Try to slow down and just maintain.
3.  Do NOT barf up that roast beef sandwich in public.

I finally did break down and take a few walk breaks after becoming more overheated and lightheaded by the second, and just figured those involved in the Rose Festival were going to have to get over it.  I saw other people taking walk breaks so I didn't feel as bad about it.

As much as the conditions were a bit punishing, the environment was pretty fun.  The race course was the parade route (hence the whole "get your ass going and don't walk" decree), so thousands of people waiting to watch the parade were lined against the streets.  There was so much cheering and craziness, and while I'm not a huge kid person, there were so many cute little kids lined up with their hands out to high five the runners that it melted my cold black heart a little bit.  They would get so excited when you'd high five them, as though they'd gotten a high five from some kind of Olympic athlete or something.  I literally felt like I was in that one scene in Rocky!  Races are always so much more fun when there is an enthusiastic crowd around!

Around the 2.5 mile mark I was really starting to feel ill due to the heat, and while distance-wise I didn't have much longer, it felt like it was never going to end.  I walked at least 2-3 blocks, and was really struggling because I needed to bring my body temperature down but couldn't.  Some pepaw noticed that I was struggling a bit and patted my shoulder as he passed by and said, "Just start running when you see the cameras again!"  It made me laugh, though I couldn't have cared less about looking less Gollum-ish than normal in my race pics.  There was another guy next to me running with his daughter who I'd estimate to be about 5 or 6 years old.  I'm not sure how I feel about letting little bitty kids run races like that, not because I'm a total jerk, but because I just don't know if it's a great idea to have your kid run for over 3 miles in the heat.  I applaud teaching them to go out and do something healthy, but it just seems a little young.  ANYWAY, the kid did give me a good laugh because her dad was like "We don't have that much farther!  How are you feeling?"  In her small little voice she says, "I'm really ready for this to be over."  I couldn't help it, I started laughing with what little breath I had.  It's like kid, you speak for all of us and especially me.

The finish line was on a downhill, and I could just kiss the person who designed it that way, because I was able to muster up my last bit of energy and fly down the hill and across the finish line.  I finished in 40:45, although my Garmin read that I'd run 3.29 miles, so I'm giving a bit of a side eye to whoever measured the course.  Since we were standing on the fake turf of the high school football field, the temperatures were so much cooler than being on the street, so I was able to start cooling down a bit.


Oh in one of the most hilarious moments of my racing days, I crossed the finish line and didn't see Eric and the fam, so I went to our meeting spot and they were not there either.  I stood there like a lost child for about 5 minutes until I finally gave up and called my aunt to see where they were.  They were all at a damn bar and didn't see me cross the finish line!  Crazies, but I love them!  We had a good laugh about it, especially when my aunt chirpily informed me that she'd had a Moscow Mule.  It's like, I had lukewarm bottled water and didn't barf in public, so I guess we're all having a good night.  ;)

Afterwards we stayed and watched the parade for a bit, which honestly was the first parade I'd watched in Oregon.  As y'all know I'm a bit of a delicate snowflake when it comes to my anxiety, so crowds are typically not my thing.  We managed to find a spot where it didn't feel so crowded and everyone around us was relatively behaved.  The parade was pretty fun and there were several cool floats and marching bands.  I snapped a few pics, though they aren't the greatest. 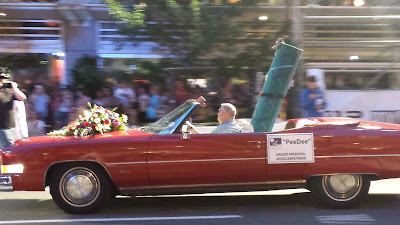 Once again just to remind you that we keep Portland weird, the grand marshal was a rolled up piece of dirty airport carpet.  I didn't realize until last night they'd named it...PeeDee.  It's like yeah, I bet there's some pee going on in the fibers of that silly ass thing. 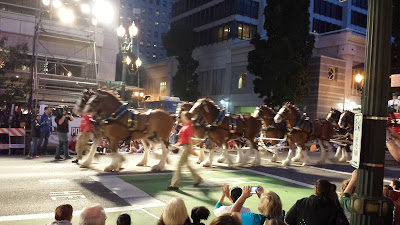 The beautiful Budweiser Clydesdales.  <3  They were not about the crowds though! 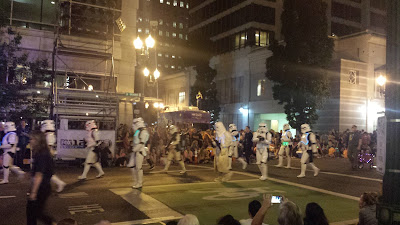 A gaggle of Storm Troopers from the Star Wars Oregon group.  They had super authentic costumes and were a big hit with the crowd! 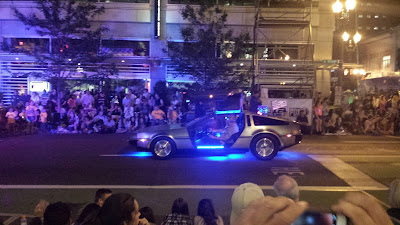 One of my favorite parts of the parade coupled with "you learn something new every day" was the DeLorean Club of Oregon.  Had no idea there was a club for that in Portland, but it was insanely cool to see 12 or so DeLoreans all together all lit up with their doors open.

Anyways that's about all the news that's fit to print.  Overall I'm glad I did the race and had a good time!
Posted by Runs To Get Waisted at 10:11 AM