I haven't had a ton of stuff to post about, hence the gap in posting, but I thought I'd say a quick hi before the holiday weekend!  I just have a little handful of pictures to post because you know, my life is so interesting and all. 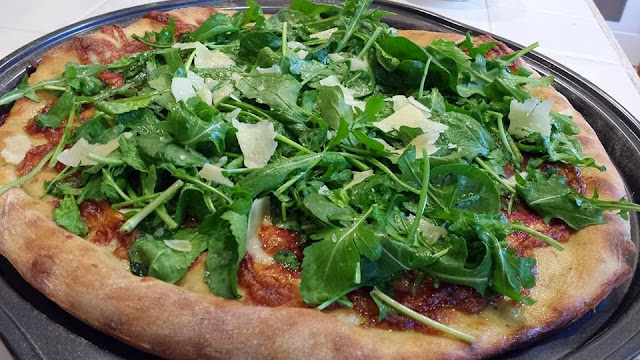 I made this bad boy tonight and was super proud of how it turned out.  Making a decent pizza crust has become my white whale over the years, and I thought I had one recipe that was go to, but it only turned out good one time.  The rest of the times it's been a flop, so I have been on the hunt for a new dough recipe.  It pains me to say that this is a Bobby Flay recipe and it turned out perfectly.  The crust was crisp on the outside with a nice chew once you bit into it.  I loathe Bobby Flay, but this is now the second recipe I've made of his that I really liked.  If you are interested, here is the recipe.

I was also wild and wooly and put cheese on the pizza first then sauce, which I'd read leads to a crisper crust.  I was giving this method a bit of a side eye, but low and behold, the pizza came out so nice and crunchy on the bottom.  I topped it with a lightly dressed arugula salad, so yay for hitting one of my veggie servings.  ;) 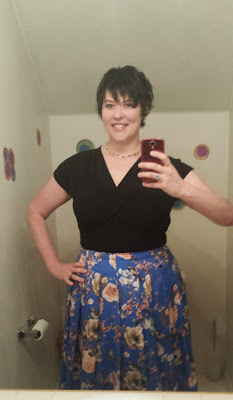 On Tuesday we went to see Phantom of the Opera.  I'd really wanted to get a new dress but couldn't find anything I liked.  I ended up taking a black dress I already had and putting a skirt over that, and it totally worked!  It was like BAM, brand new outfit.

Now y'all might think this is a picture of Elizabeth Taylor and Richard Burton but you know, it's just us looking fabulous. 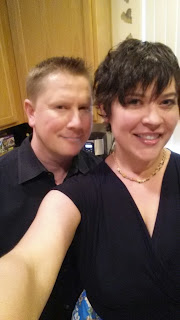 The production of Phantom was really great and I cried the way I ALWAYS cry at Phantom even though I've seen it a billion times.  I just feel bad for the dude.  It's like you know, he's got a butterface, but he's also got his little reclusive waterfront property, musical talent and can wear a cape like no one's business.  What more does a girl really need? 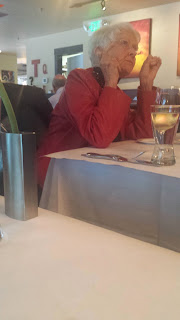 So I wouldn't normally post pictures of people who didn't give permission to be on the blog, but I need to celebrate this memaw's general fabulousness.  She and her man were sitting at the table next to us when we were having dinner before Phantom.  First off, that is a red leather jacket and she had on a really dope statement necklace too, so nothing but style points from yours truly.  She ordered a couple glasses of wine and totally bitched out the waiter because her pear salad had no pears on it.  (I glanced over, it indeed had no pears).  The waiter was trying to convince her they were sliced very thin, but Red Leather Memaw wasn't having it, so the waiter brought over a little plate of sliced pears.  I wanted to pump my fist in the air, because sometimes you have to fight for your right to enough pears in life, even when the haters are trying to tell you they're sliced into thin air.  I just loved her Katherine Hepburn put together with a slight punk rock edge ways.  I want to be in the Red Leather Memaw club when I get old.

And of course I'll end with Molly silliness.  I vacuumed and steam cleaned the carpet in several rooms in the house yesterday because I knew it would make Eric happy, despite generally loathing all housework.  I knew it would mean a lot to him, and since sometimes I'm nice, I did it.  Anyway I moved Molly's bed into the kitchen for literally 30 seconds so I could vacuum, and when I was finished I turned around and saw this. 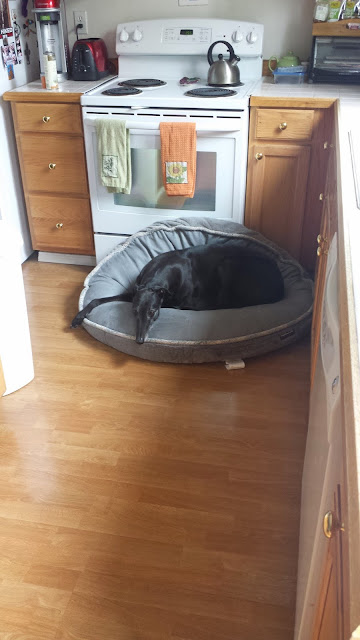 This damn ridiculous dog could win an Oscar for her pitiful little performances.  She followed me all over the house as I was steam cleaning.  It's like, don't most of your species hate vacuums and the like?  Go away!

I hope that all of you have a wonderful holiday weekend!
Posted by Runs To Get Waisted at 6:51 PM