Yep you heard me.  This post is going to be sexy folks, so get ready!

So we have two kiwi vines in our backyard that I have a love/hate relationship with.  They are a monumental pain in my ass in just about every respect, but the plant is beautiful and provides a lot of shade.  Our summers are becoming more punishing every year, so the shade they give us and my poor garden boxes is just about the only reason they haven't been ripped up.

The kiwis came to live with us because they were a replacement baby for my beloved eucalyptus tree that died a few years ago due to a disease.  We went to the garden center to get something to replace the spot where it was in the yard, and I asked Eric if he had a request, and that maybe a fruit tree would be nice.  We saw kiwi vines and were like "huh, that's interesting" and decided to get it, because what's better than buying a complicated plant sight unseen?  We got the thing home and I started reading up on it, and the stupid things come in male and female plants, and you have to have one of each in order to get fruit.  There is no equality in the kiwi world unfortunately.  We had a male, so I had to schlep back to the garden center to find a female vine.

That second trip to the garden center was the first step in a 8 year pain in my ass journey.  This plant is insane and has crazy aggressive vines that you have to train or prune the crap out of to prevent it from taking over.  So there's that.  Kiwis take a very long time to produce fruit, so we waited about 6 years before we even got kiwis, a whole three kiwis that were moderately decent.  Besides needing a male and a female plant, kiwis are notoriously difficult to get to fruit, so hand pollinating them is the best option to get fruit.  Yes, I have to help my kiwi plants diddle, because my life isn't weird enough.

My reason for telling you all of this nuttiness is that the stupid female flowers finally started to open up this week, so I've been running out like a madwoman every day when a new one opens so that I can pollinate it.  Which means hopefully I will have fruit in the fall that I can eat, and fruit is healthy.  So there.

Oh and it's also a PSA to not buy kiwi vines.

I failed miserably yesterday on getting my activity in.  No excuses for it, I just got caught up in interview outfit shopping and interview prep and the day just kind of slipped away.  I was too lazy to force myself to do anything last night, so I knew I had to get my butt out there today.  Due to an interview I got a late start and wasn't able to do anything until 2 pm when the weather SUCKED because of the heat.  We had movies due back at the library, so I decided to drop those off then walk around the library park.  The park is beautiful, but it was about 89 degrees when I went out and I hated every second of that.  Honestly it made me dread that my marathon training will start soon, because all of the horrible depression and memories about running in the heat came flying back in my brain.  Ah well.

I took breaks in the shade so that I could take a couple of pictures.  I love the way the trees are mirrored in the pond.  I didn't realize Oregon had bullfrogs but apparently we do, and they were croaking very loudly and making the most bizarre/amusing sounds.  Hearing them brings back so many memories of my childhood and playing by the pond at my parent's house.  The frogs were always making a racket! 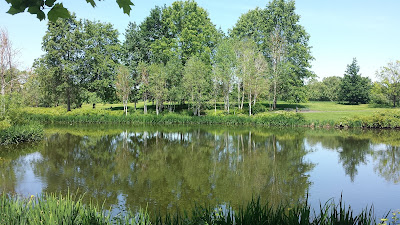 Oh and no matter how miserable things get, there are always things in the world that can cheer you up.  Like baby ducks napping in the shade with their mom. 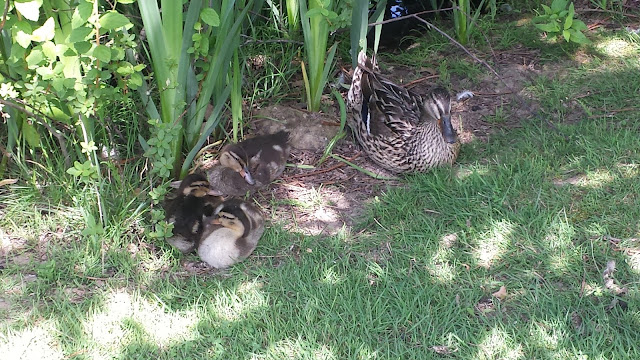 Posted by Runs To Get Waisted at 4:51 PM