Cooking Light, Challenges and Being Waterlogged

Yeah, here comes that whole "sorry for not posting, been busy, blah blah" statement I always make.   The truth of it is that I have been in a long term rut/funk for like 2-3 months.  Definitely have been stressed about the job thing, that's like 90% of it, the rest of it has been other random stuff that's too minuscule to even mention really.

My weight hasn't been affected at all, I am mostly still on the health path, though sometimes I meander off the path when cake or beer is involved.  I haven't gained, but I'm not really losing either, so the opportunity to be at goal by the end of summer or mid-fall is slipping away.  I'm not even in the 100 Club yet, which is so irritating but of course my own doing.  And I fully admit, I have bailed on my yoga challenge.  It's so strange to me, I used to be very passionate about yoga, and I still fully believe in it and love the benefits, but I was not passionate about this Ultimate Yogi DVD set.  In fact, I loathed it and dreaded doing it.  And it's not the same kind of dread I have before runs, but I know deep down I'll feel good during and after.  It was just dread, and I don't do dread anymore, so I stopped.

Thankfully my Lovely Ladies fitness group is all in the same kind of funk, so Tiina from One Crazy Penguin proposed a challenge to the rest of us that will last for a few weeks.  Each week there is a different challenge, This week we have to lose a half pound and drink 100 oz of water a day.  Naturally I am measuring my water in a beer glass, because...well I'm me. 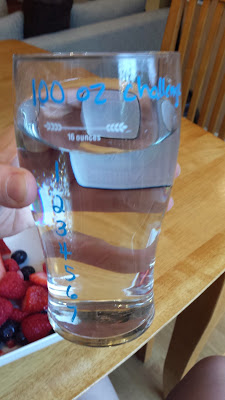 I will say, it's the first time I've felt enthusiasm towards health goals for a bit.  It's fun to work towards these goals with my ladies, especially THIS group because I kind of love them.  I'm not competitive in the least, it just feels nice to have company and not feel alone.  The anticipation for the challenge and then actually drinking a bladder exploding 112 ounces of water yesterday made me get back into other habits that I know work because...


(Side note:  do you ever get the sense that all artists in the 80's just pulled the ideas for music videos out of their ass?  "Okay so random, too brightly lit tunnel and Dobermans?  Check.  Lead singer who looks like David Bowie Lite?  Check.  Let's do this!")

Yesterday I sat down and clipped coupons (saved $22 on my grocery bill bitches!), made a meal plan, went shopping and tracked all my meals in MFP.  These are things that I know work and make me feel 100% better mentally and physically, but I've been too lazy and feeling the sads to do them.  It feels good to have healthy food in the house, and there are literally no snack or dessert options other than healthier stuff (ie berries, peanut butter, popcorn, etc)  MFP was actually yelling at me last night because I didn't eat enough calories, which it's like oh HONEY, I think after last week we can call it even.  I am actually running into the same issue today, I have all my food tracked, and even with two snacks I'll be at 1000 calories, which is way too few.  Oh darn, guess I will have to sneak in a couple more things.  ;)

One thing that has helped lately is subscribing to Cooking Light magazine, and if you guys have never checked it out, you really should.  The only reason I got it is because our airline miles were going to expire for some reason, and they gave us the option of converting them into magazine subscriptions.  The list to choose from wasn't very exciting, lots of magazines that I like to put in the Snoots Magoots category:  Wine Spectator, Afar, etc.  Cooking Light was one of the options and I subscribed very halfheartedly.  Usually those types of magazines have recipes that are lame and just don't appeal to me, but I have actually been really pleasantly surprised.  The recipes are simple but creative, and as someone who cooks pretty regularly, I can tell they have been tested  pretty extensively.  Sometimes you get these recipes where it's like, did a single soul actually make this recipe, because the measurements/cooking times don't work AT ALL.  Anyway, every recipe I've tried from it has been a home run, and I've been gradually tearing out certain ones to keep in the rotation.  Last night I made a nice steak salad with these broiled Parmesan cheese tomatoes, and it was a pretty great dinner.  Lunch today is a bulgur wheat and blueberry salad, and tonight I am testing a tomato and leek pie for dinner.

Nothing more to say, so I wanted to leave off with a nice picture I took last week of me and Molly on one of our walks.  For once she doesn't look miserable to have her picture taken, and I was surprised by how thin my face looked in it.  A win all around! 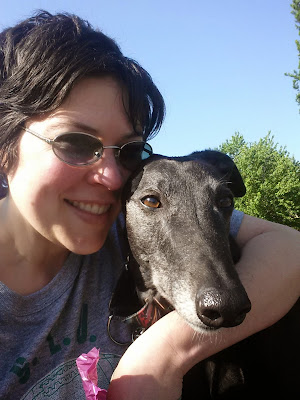 Posted by Runs To Get Waisted at 8:49 AM