Don't Give a Damn About My Bad Reputation

I know all I'm doing lately is apologizing for not posting enough, but again, I'm sorry!  We are leaving for our big Midwest/East Coast jaunt in a mere couple of days, so things have been quite crazy.  Tons of loose ends to tie up before we leave, people to see, neighbors to rip a new one, (seriously, y'all just don't even know) things to do, and on top of it one of my dear friends had surgery so I went to sit with her wife to keep her company whilst this was all going on.  In a nutshell, my friend had a tumor in her kidney that they thankfully caught early, but naturally we've all been very nervous for 2-3 months.  Yesterday she had surgery to remove the tumor and  I am happy to report that her doctor (who kind of looks like a bro version of Dave Grohl) is pretty sure it's benign.  YAY!!  We still have to wait for tests to come back to prove this, but Bro Dave Grohl was 95% on the benign diagnosis.  YAY again!

I have been so busy with all this stuff that I've been meaning to post more about the Rock and Roll Hall of Fame induction ceremony (for brevity, we'll just say Rock Hall).  Videos, stats, me raging that skank Miley Cyrus is inducting Joan Jett, that kind of thing.  I just simply haven't had time, which is sad because I live to talk about all things Rock Hall, probably to the chagrin of everyone around me!  Anyway in a nutshell in case you haven't seen my previous posts, this is the Rock Hall Class of 2015: 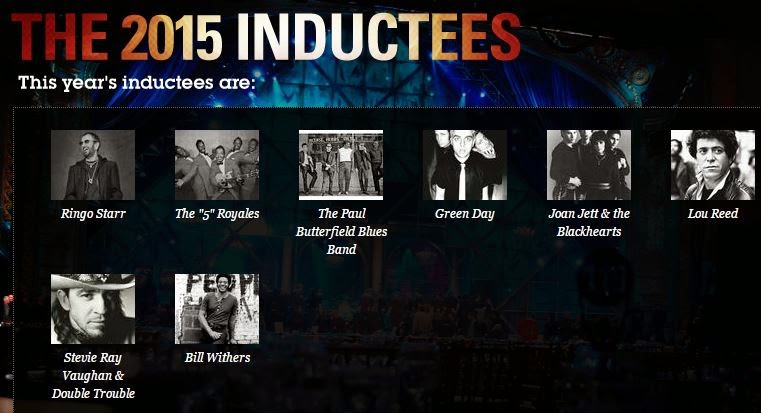 As they have released more information about who is inducting who, and who is/isn't performing, I have been mostly disappointed.  Bill Withers is likely not performing, which is pretty disappointing.  I will be subjected to Fall Out Boy, John Mayer, John Legend AND Miley Cyrus.  Seriously the Miley Cyrus thing makes me so mad that as my grandmother would say "I want to chew nails and spit out staples".  I'll have to pack whatever the Plan B version of Valtrex is to combat all of this nonsense.  I am still super grouchy about Green Day getting in, I was honestly pulling for N.W.A., but I just have to make peace with it.

As an aside, I have to say how much it disappoints me when people rage about hip hop acts getting into the Rock Hall, and feel like people are missing the point.  Rock and roll is a genre but it's also a state of mind.  If it makes you question, if it makes you uncomfortable, if it's scary, if it makes you feel strongly...that's rock and roll.  When Chuck D rages against authority and injustice, it's just as rock and roll as when Neil Young or the Sex Pistols do it.  The purpose of the Rock Hall is to attempt to honor those who have had an impact on culture/other musicians.  Think about groups like Run DMC, Public Enemy and N.W.A and the impact they have had on music culture and the political spectrum.  Maybe you don't like it, but you can at least "get" it.  Anyway, that is my little rant for the day since I get tired of the prickish comments I hear all the time.

Of course the one thing holding me together is that I am beyond lucky to be able to see Ringo Starr perform with Paul McCartney.  I will be in the same room with them, and I will see them perform.  As a Beatles fan, if I think about it too much, I will get teary and emotional about it.  I am so excited. I am also pretty excited for the Stevie Ray Vaughan induction/set.  I've been angry for several years that SRV isn't in the Rock Hall, and now he's finally getting his due!  Gary Clark Jr. who is insanely hot a blues prodigy will be performing in the set, so I am very excited for that.

At the end of every ceremony there is an all star jam at the end, and I am really excited and anxious to see what this year's will be.  They are honestly magical and mind blowing no matter what, because you're seeing legends all on one stage, performing together.  I had to post the video of the one from the 2013 ceremony that we attended because holy shit.  The combination of hip hop/blues/rock and the vast combination of the people on stage seriously blew my mind.  To have been in the room for this, I can't even describe how insane the crowd was going.  Totally blew the roof off the joint.


I will try to post before we leave, but no promises!
Posted by Runs To Get Waisted at 9:31 AM